This panel caught up on the most buzz-worthy trends of the market, with help from our experts: executive editor Adam Flomenbaum of Found Remote on The Drum, board member and president Catherine Warren of Bell Fund/Fan Trust Entertainment, research director Guy Bisson of Ampere Analysis, editor in chief Julian Newby of MIP Publications, and moderator James Martin, who’s also head of social media for MIP.

Martin ran through the biggest trending topics for the week in order of social media activity, and kicked off by sharing a tag cloud. Not surprisingly, the most mentioned terms were names of stars, including online entrepreneur Michelle Phan and writer Harlan Coben. Call it the star effect.

Now, onto other topics of note:

#MDF: MIP Digital Fronts’ hashtag was third most-mentioned of the week, with 7 of the 10 biggest tweets, and the subject of two of the top 10 MIPBlog reports. The biggest tweet of the market got a boost from Michelle Phan, not to mention VICE’s VICELAND announcement.

“Everyone’s very serious about crossing the aisle” between TV and digital, Warren of FanTrust noted. “I’d like to think that in 5 years these distinctions won’t exist anymore.”

#studioplus: The No. 7 hashtag, with 3 of week’s most RT’d tweets (Review the Dominique Delport announcement of Studio+ in our breakdown of his epic keynote on the power of mobile and the need for premium content. Studio+ will notably valorise European and Latin content and collaborators.)

#MIPFormats: The No. 9 hashtag, especially in reference to this week’s most-viewed MIPBlog post—for our MIPFormats International Pitch report, not forgetting Fresh TV Formats, which notably included Dogs Might Fly and a multiplicity of reality formats about “virtual” ways of cultivating relationships, like Date My Avatar.

“A plateau was reached two years ago when people started worrying about too many extreme formats—things that were exploiting people, and too many talent formats,” said Newby of MIP Publications. “The formats market was being polarised, and talent plateauing out. Commuting to online is a way of testing out the next big thing. It’s low budget and mass market. The best formats are water cooler moments that can be tested and experienced in groups.”

Bisson of Ampere Analysis observed that much of the content we saw speaks most to the millennial market. “I’m slightly older—generation X, before the millennials—and swiping on appearance” (à la Tinder) “isn’t part of my makeup. I think that’s reflected in the new dating formats.”

“Another thing captivating millennials is the trend towards live,” Warren added, pointing to the prevalence of Periscope and other livestream offerings, such as Facebook Live. “Talk about fresh, raw and unedited! These young celebs and talent are throwing themselves up there and not feeling like anything has to be done, let alone hair and makeup.”

#factual: This hashtag was responsible for 2 of the top 10 @mip Tweets, driven in great part by Morgan Spurlock’s galvanising keynote on Saturday.

“Morgan Spurlock’s very interesting because he encapsulates everything. He’s a branded content man, makes films for theatre, and works with brands. He’s a 360 guy,” said Newby, building on credentials to add weight to Spurlock’s conviction that we’re in a golden age of factual entertainment.

But factual, he noted, has also evolved from our common understanding. “You have to ask the question, what is factual?” Newby went on. “Making a Murderer was one of the most compelling things we’ve ever seen, and Jinx as well. I binged it, and I don’t binge factual, because it was edited like drama and left information out like a drama. They blurred the lines between factual and fiction.”

After explaining that his millennial kids turned him onto the aforementioned programmes, Newby observed that Making a Murderer “was trailer park trash at its worst, shown with all its warts. But we followed it because it was beautifully edited. Sometimes you forgot that it was not drama.”

#fiction: The MIPDrama screenings were featured in the MIPBlog top 10. There were 58 shares for the Fresh TV fiction report, plus, just today, The Hollywood Reporter reported on Netflix beating Channel 4 to secure Black Mirror.

“That is a possibly game changing example of a new player beating a traditional player to secure the rights for new series,” said Martin, who asked the panel how they believed it would change the game.

“The money Netflix is spending on new drama is a phenomenon compared to what they make, which we don’t know, so they’ve been changing the game” for a long time, said Newby, who wittily added, “windowing goes out the window!”

“The trend for global licensing, driven by Netflix and some others, changes how content is produced,” said Bisson. “It encourages cross border co-prododuction because you want a story that works in many markets, not just the UK or US. There’s definitely a shift towards internationalisation, co-production, and global licensing—key, going forward.”

Bisson also observed that, 15 years ago, Sky was a disruptor. “Everyone is moving in the same direction. It’s about control of rights. Global rights have become an incredibly valuable asset in TV industry.”

Flomenbaum of Found Remote on The Drum pointed out that Netflix and Hulu all started as primarily content licensors and are increasingly original content-heavy. “It’s all about data: Netflix uses it to inform content they’re creating,” he said. But it isn’t the only one, either: “Twitter is banking on their resonance with sports fans and know they can sell around the NFL deal, and Facebook stands to gain the most from getting into the original content space. They have the most deterministic data about everyone on their platform and can create content around those people.”

Netflix pioneered that model with data-driven shows like House of Cards, but Facebook can take it one step further, Flomenbaum predicted.

“Sky’s now spending a lot of money on original drama. But headlines about its premiership deal a year ago, that represents billions,” Newby said. “That’s something they have to do to maintain their position, and it’s something you’re not gonna see Netflix do for quite some time.”

“Sky’s been backing away from a number of sports, and they’ve let BT take some away quite happily,” Bisson countered. “The Premier League is an exception; one of a kind.”

#VR: This was our No. 8 hashtag, with 40 RT’s and likes for tweets around our MIPBlog report about what virtual reality represents for TV.

“I have two words for VR: Excitement and questions,” said Bisson. “The question is, will it be another 3D—will it flop and disappear? It has similar constraints: a headset requirement, and investment in new technology. What was very clear from this market, though, is it’s not actually about the tech but about the content. So what sort of content will work well?”

He noted that Discovery and Fox Sports are making aggressive moves into the arena, but it remains a new world that needs mapping. “How do you create a toolkit of techniques to drive the viewer through the environment?” The pathway to this is clearer for games, where users have objectives, but less evident for TV. “The content has to come or there will be no market,” he said.

Warren pointed to the educational value of the experience. What if you could immerse yourself in the events of the Arab Spring, and in the end develop more empathy for the people who actually experienced it?

And Flomenbaum pointed to VR’s implications for the travel industry: “It will never replace experience, but it will create FOMO (fear of missing out) moments that drive people to want to experience things for themselves.”

#esports: This topic alone generated 42 shares for MIPBlog’s report on whether esports would become the next great content powerhouse.

Esports is a space that represents pro-level gamers competing live in video games, and enjoys an enormous spectator audience, both online and off. It’s also a huge driver of livestreaming.

“Top-notch pro video games command audiences as large as many traditional sports,” said Warren. “In 3 years, the industry will grow to over $1bn.”

And its demographic may surprise many: The fastest-growing segment is females over age 25, and people who are family-oriented and high-income. “They’re not kids in basements,” said Warren. “It’s a shared experience, a growing experience for a lucrative demographic.”

She added that esports fans love subscriptions. “Esports fans more likely to subscribe to Netflix, pay TV, and Spotify. That’s important for us.”

Warren suggested that networks engage esports fans — which this year total 300m — with esports programming (like the BBC and Turner are doing), after-shows with commentary and stars as hosts and talent, and reality series and other factual content about their world (as Machinima is trying to do with Chasing the Cup).

“What esports reflects is how new platforms can be mined for talent, and how that talent can come from somewhere completely unexpected,” said Bisson.

#brands: This topic generated 23 shares for MIPBlog’s report on the Mattel keynote with Richard Dickson.

“Branded content is a game changer, and has been happening longer than people think,” said Flomenbaum. “Mattel’s been in the industry for 70 years now. Thomas the Tank Engine is led by content, and toys and books follow that.” Barbie, the brand people most often associate with Mattel, represents the flip side: It’s led by an iconic toy that initially had little content around it (today she’s super social media-friendly, and even vlogging).

Flomenbaum also cited Dickson, who said, “This is the first generation of kids who think and play like producers.”

There’s more opportunity than ever for brands, because kids will grow up not understanding the different between branded content, native content, or any other kinds, he went on. “They’ll just see it as content. Mattel and other brands have the chance to exploit that. Thomas the Tank Engine, for example, really took off in US, but hasn’t done so well elsewhere”—which will soon change, as Mattel is reformatting it now for other markets.

For those wondering what the ROI of branded content is, he again pointed to that sweet tank engine, Thomas. “They’re creating new series and formats globally, and are an example of how toy sales can grow exponentially from there.”

Other examples of note include Mondelez’s Sour Patch House in Brooklyn, where musicians can create new songs. “All the content created there is authentic. Moving forward, as long as people create authentic and resonant, value-adding content, nobody will care it’s a brand,” said Flomenbaum. “Vice doing a lot with Samsung and Unilever; 50% of VICELAND revenues are going to be native advertising. They’re gonna cut out the :30 spot, combining factual with brand. I don’t think consumers will care as much as people say.”

TV and brands want to control the situation, he acknowledged, but it’s critical to take a leap of faith. “People don’t want to watch :30 commercials anymore. Turkish Airlines recently said it likes working with MCNs more, because they’re more authentic, fun and engaging to work with. You need authenticity with brands.”

#vertical: This year marked the first-ever MIPTV Vertical Video Competition, a quest for today’s most cutting-edge producers in the format popularised by Snapchat. The winners were Jean-Charles Granjon, of Bluearth Production, who won the jury prize for his breathtaking film Impact; and Julien Aubert of Bigger Than Fiction, who won the public vote with Slow Moscow.

Our interview with the winners was the 2nd most-shared post of the week. We screened the videos (shown below), and Granjon (right) and Aubert (left) joined our panelists for a photo op with Martin. Enjoy! 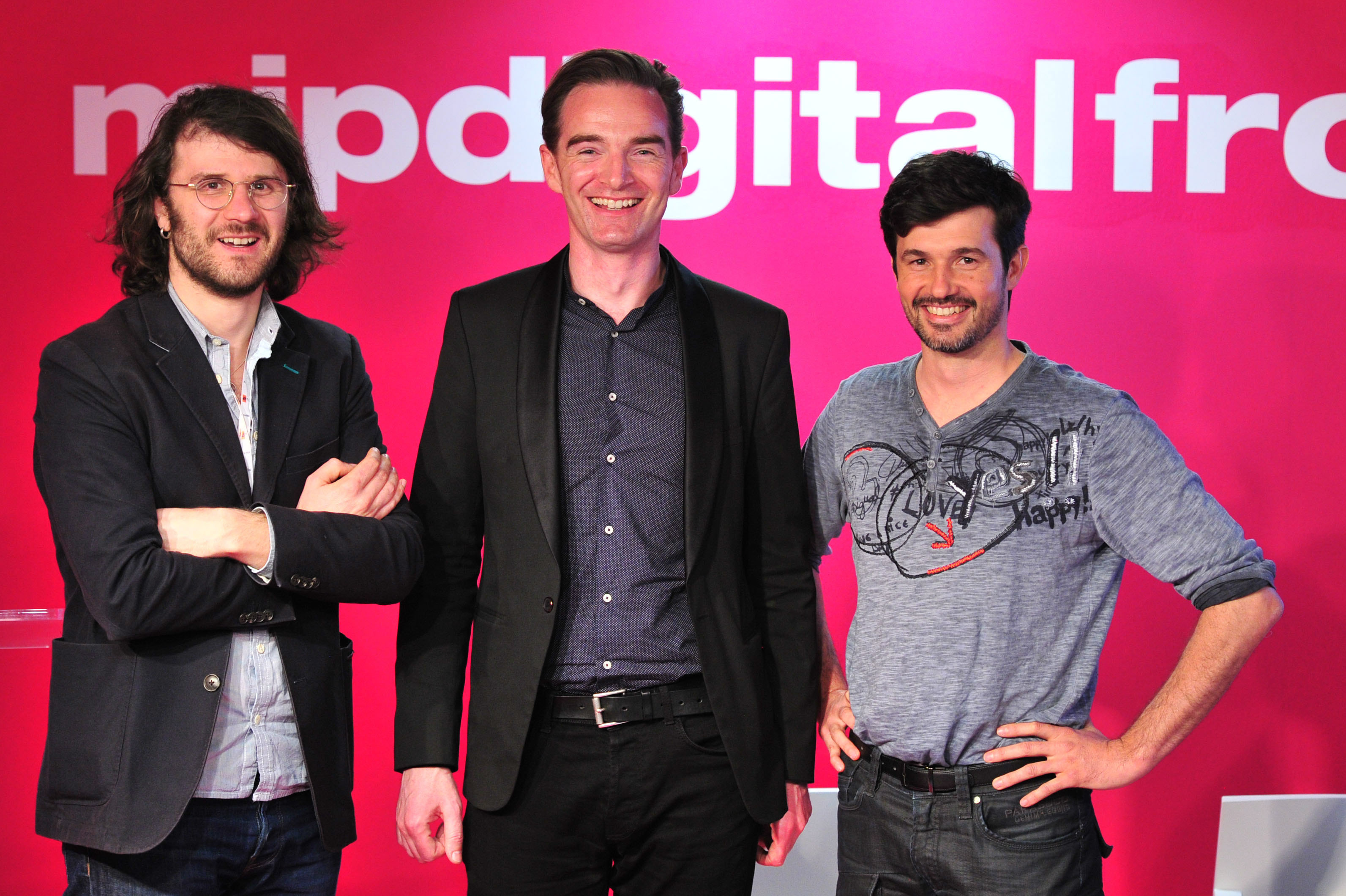