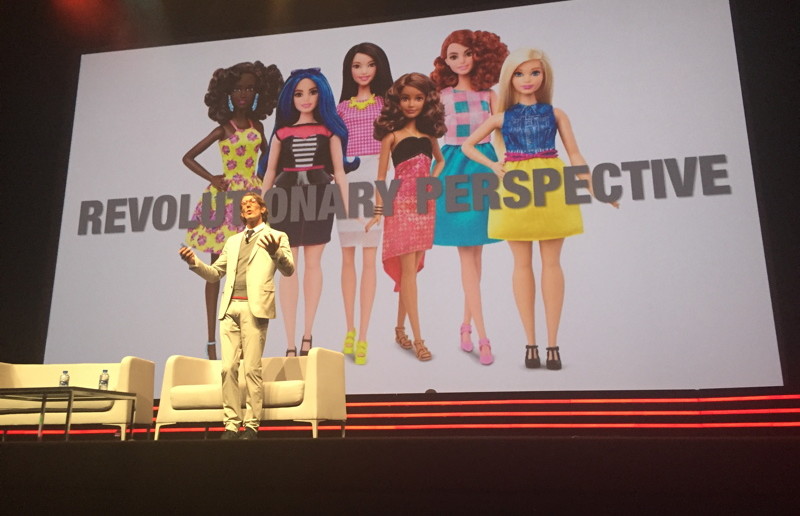 MIPTV report: Keynote with Richard Dickson of Mattel, 2016 Brand of the Year

"This is the first generation of kids who think and play like producers," says Dickson in this colourful call for partners.
By Angela Natividad on April 5, 2016 0 Comments

President and COO Richard Dickson manages Mattel’s iconic portfolio of global (and increasingly cross-platform) consumer brands, including Barbie, Hot Wheels, and Thomas & Friends. For its track record as an innovative content creator and forward thinker, Mattel was named Brand of the Year for MIPTV 2016—an award Dickson accepted from Laurine Garaude, director of Reed MIDEM’s television division, ahead of his passionate keynote this evening. 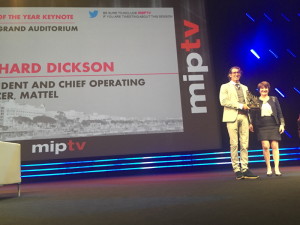 “While Mattel has a storied history, its best days area ahead,” he began, going on to describe Mattel’s classic American origin story: In a garage, 70 years ago, in Southern California, when great things were happening in music, technology, media… and, of course, toys.

Dubbed Mattel Creations, the founders’ dream was to invent revolutionary new ways for kids to play at the same time others were developing revolutionary new TV models. Kids were increasingly engaged by the new medium of television, so toys would have to tell compelling stories, they figured. That’s how Mattel came up with the idea of creating the first-ever TV ad targeted to kids, effectively bringing toys to life.

“So why aren’t we a global leader in media today?” Dickson asked bluntly.

He answered his own question with an honesty that’s a tribute to what Mattel has spent the last several years trying to reclaim. “We became really comfortable with success, devolving into a packaged goods company that made toys,” he said. “The :30 commercial we ran was short form content when we invented it, but it became such a part of our culture that we couldn’t look beyond it. Our media became focused on on tonnage, not innovation.”

Part of Dickson’s job was to help reconnect Mattel with what made it great in the first place. Fittingly, he summarised his own manifesto at MIPTV in 2008: “Kids are the ultimate early adopters.”

“Media is the facet of play where kids are rapidly becoming both consumer and end user,” said Dickson. “It’s where kids are most in control. They can discover, make choices; media is more and more influential over other components, particularly toys.”

And kids are naturally suited to a media intensive world, he went on. “They’re unaware of limitations and less conscious of barriers. They’re natural hackers, eager and able to find solutions. They’re passionate about media and storytelling. Today they curate their own experiences and configure their own rules, despite what we want. This is the first generation of kids who think and play like producers. They expect toys to come to life in every dimension: TV, online, games, movies are just for starters.”

But to take advantage of this, brands must be healthy and relevant. Their products must matter and be desirable. “Many of our brands weren’t ready until now,” Dickson admitted. The last several years have been devoted to bringing them up to date.

The first and most obvious candidate for a makeover was the iconic Barbie. Notably, in the past year Barbie’s introduced dolls with multiple skin tones, hairstyles, hair colours, eye colours and fashions. Mattel also launched “Hello Barbie,” which responds to kids’ most pressing demand: It’s a Barbie that talks back.

But the most dramatic change has been to Barbie’s classic body. “We took the largest risk and most exciting step in the context of diversity: Barbie’s figure and dimensions changed,” Dickson said. She can now be tall, petite and curvy, in addition to her classic fall-over proportions.

“Innovations like these bring new relevance and attention to Barbie,” said Dickson. Results have been spectacular; it’s created a global media sensation that money can’t buy. What media push gets the cover of NY times magazine?”

Mattel hasn’t stopped there. New variants of Barbie also celebrate modern heroines, bucking the idea that Barbie’s more or less the play variant of a trophy wife. Women like Ava Duvernay have been represented as Barbie dolls, and later this year, a Misty Copeland version will come out.

Notably, in partnership with Moschino (which led the creative), Mattel also featured a boy in an ad for the first time:

But Dickson acknowledged that Barbie’s biggest problem is that it simply lost touch with millennial moms, whose values and priorities have changed compared to previous generations. That’s what led to “Imagine the Possibilities,” a campaign that sought to reintroduce the importance of play to them in a way they can get on board with:

So Barbie is relevant again. And the biggest measure of success, Dickson indicated, is that this level of relevance is now expected from the Barbie brand—ensuring it will keep evolving as time goes on.

The next candidate for transformation was Fisher Price, which, when it launched in 1930, was a leading childhood development company. Mattel wanted to reclaim that brand equity and find new ways to talk to parents.

“Engaging millennials at their busiest, sleepless and most distracted as new parents required us to completely rethink how we express what Fisher Price is,” said Dickson. “So we created content and reached out with a social approach that engaged a connection.” Say hello to the highly emotional Wishes for Baby:

As with Barbie, the Fisher Price team didn’t rest on its laurels after positive ad reception. It quickly set to work releasing a “revolutionary line of product” with millennial parents in mind. Codeapillar, for example, is a caterpillar toy that helps kids learn to code. Fisher Price also released a high chair that can be completely taken apart and cleaned in the sink or dishwasher. And on online platform A Film By You, parents can lovingly mark and share the milestone moments in their child’s development.

Next up was Hot Wheels, whose content makeover is best illustrated by Track Wars, which encourages kids to build elaborate tracks by showing great ones in competitive environments:

Hot Wheels is also actively at work “hot wheeling” other IP: Take the Star Wars Hot Wheels, for example. “A brand like hot wheels can be endless and inspirational,” said Dickson.

Other innovations are coming, too. “We just formalised a partnership with DHX to produce innovative episodic content across platforms,” Dickson went on, in addition to working with 9story to relaunch two iconic preschool brands: Barney and Angelina Ballerina. “And we are fortunate to have long, legacy creative partnerships with entertainment companies like Disney, Warner Bros, Universal, Sony, and now Amazon Studios and DreamWorks.”

Mattel is also formalising its internal innovation process to ensure its legacy doesn’t get lost again under the glowing spotlight of success. “We’re carefully considering what’s working for others, what’s working for us, what’s not working, what’s emerging,” said Dickson. “Where can we best enhance and innovate? We’re translating those insights into action.”

Toward this end, he announced the launch of Mattel Creations: An global innovation hub that, in name, nods toward its heritage. Leading talent includes chief content officer Catherine Balsam-Schwaber and Christopher Keenan, svp content development and production.

“It’s all of our brands under one creative voice and one global content group,” said Dickson. Mattel Creations’ priorities follow thus:

“I want to make it easier, more exciting and desirable for you all to work with us,” said Dickson. “We’ve made being partner of choice a top priority; we hope you’ve heard that Mattel is more collaborative and advantageous than ever before. Our motivations are no secret: We want to work with the best, and we want their best work, because we know it will make us more successful.”

That’s just a small glimpse of what’s to come, Dickson promised. “It’s a big and exciting moment for me to sit with all of you in your fields, and be part of this new and exciting world. I hope you’ll join the Mattel constellation of talent that will continue creating this legendary company’s future.”