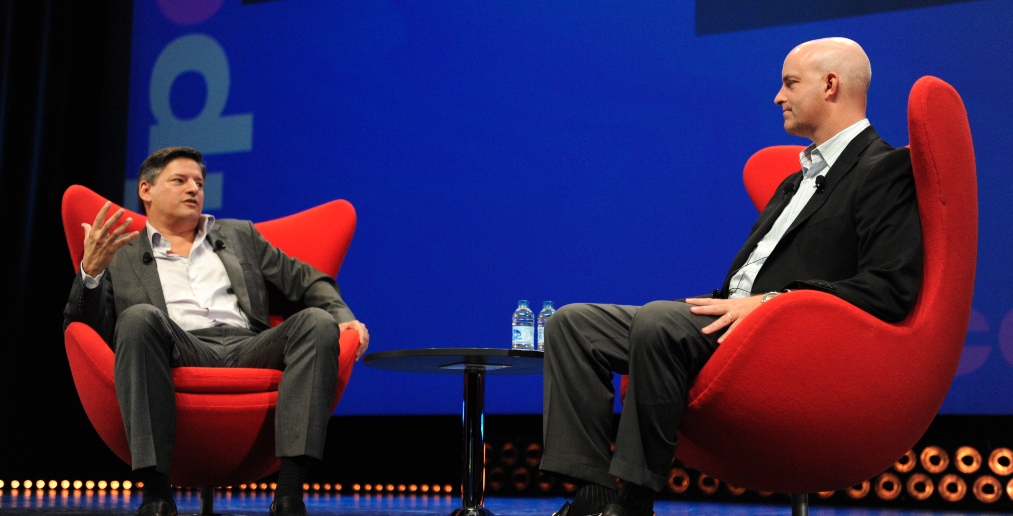 Why flexible deals, 2screen engagement and social media led the buzz in Cannes
By Stuart Dredge on October 18, 2011 1 Comment

Now the dust has settled from this year’s MIPCOM, we can think about the wider trends that emerged during the conference sessions, particularly around the potential (and challenges) of new platforms and technologies.

One striking thing: the importance of digital in keynotes from Miramax+Netflix (photo), Fox, Viacom and Disney.

Miramax CEO Mike Lang talked about the revived studio being “a bit more Silicon Valley than Hollywood”, while stressing the importance of striking wide-ranging digital deals. “We think everything starts with the consumer. They’re not focused on windows or on what schedule they can watch something or on which device.”

Sharing the stage with Lang, Netflix‘s Ted Sarandos said this consumer understanding has to include using piracy as research: “If you want to see what people really want, look at what they’re stealing,” he said.

Fox’s Kevin Reilly talked up the importance of social media in creating buzz around new shows like New Girl, whose first episode was made available on iTunes two weeks before its on-air date. And he also pointed to synergy between old and new media. “Potent TV franchises can migrate across all technologies and behaviours… they need us and we need them… The future isn’t either traditional or digital: it’s a feedback loop between the two.”

Viacom’s Robert Bakish agreed, telling the MIPCOM audience that “social media has become a weapon of mass TV mobilisation. Think of social media as a telephone. Often we’re the conversation“.

Finally, Disney’s Anne Sweeney made digital transformation the heart of her keynote, hammering home the idea that the challenges should be embraced rather than fought. “Digital technology didn’t disrupt our business. It transformed it. Digital didn’t weaken the power of television. It unleashed it. We’re giving people more quality and options than ever before, and they’re responding: tuning in, logging on, downloading, streaming, buying, renting – devouring our content any way they can get it.”

The caveat is that these powerful TV industry execs – and their compatriots at other studios, producers and broadcasters – must continue to back these words up with actions in the year ahead: flexible dealmaking, rather than counterproductive blockages for the disruptive new devices, platforms and services that the keynoters were hailing at MIPCOM.

Other trends that stood out at the event were the various efforts to harness the 2screen phenomenon – people fiddling with their smartphones and tablets while watching TV. Two startups worth watching into 2012 are Ex Machina and Zeebox. The former company’s CEO Jeroen Elfferich spoke in a session focused on disruptive startups, talking about his work on FremantleMedia’s Intuitie – the first TV show made for second-screeners. “Today, most of the second-screen examples we see lack meaning,” said Elfferich. “They have been bolted on to an existing TV show. We need to look for more meaningful examples.”

Zeebox is working on its own app designed to replace standard Electronic Programme Guides (EPGs) with something more social. CTO Anthony Rose – one of the creators of the BBC’s iPlayer in his previous job – explained that Zeebox will help people see what their friends are watching, as well as getting personalised recommendations. “This is TV’s new best friend,” he said. “It’s not people moving away from live TV. It’s making live TV better for the next generation.”

Elsewhere at MIPCOM, there were practical sessions on making the best use of YouTube, and tapping into ‘crowdfunding’ to raise money from fans of your content.

Meanwhile, FremantleMedia’s Claire Tavernier gave a precise summary of what producers should be looking to achieve from their social media activities. “It has to either help us with the acquisition of new audiences, or it has to help us with the retention of our audience, or it has to help us monetise our audience. It has to do one of those three, or honestly, we should not be doing it.”

The excitement in the TV industry around social media is justified, but it can feel sometimes like pressure too: if you’re not engaging with viewers on Twitter, Facebook and YouTube, you’re doomed. A counterpoint came in the session analysing the success of Scandinavian crime drama The Killing, where producer Piv Bernth happily admitted that the show’s original broadcaster is “not very active on Facebook and Twitter and stuff, but we might go into that in the next year”. There was huge social media chatter around The Killing, but it was organic and came entirely from viewers.

In other words, there is still an argument for making amazing TV and letting the social buzz happen naturally.

Either way, with YouTube increasingly encouraging producers to post video to their platform – and telling them how best to do it in their new Playblook – or Facebook teaming up with Netflix and Spotify, it remains to be seen whether these online giants will ever directly pay creators for their content, beyond simply offering them a platform to reach millions of eyeballs. A topic to be tackled at future MIPs, perhaps?

All of the above-mentioned sessions are available in full video here; and you can catch up on all of our MIPCOM/MIPJunior live coverage here.

Stuart Dredge is a freelance journalist who writes for The Guardian, Music Ally, Mobile Entertainment and the Sunday Times. He also writes a daily email newsletter – The Appside – about how entertainment companies and brands are using apps. A sample issue and signup details can be found here.