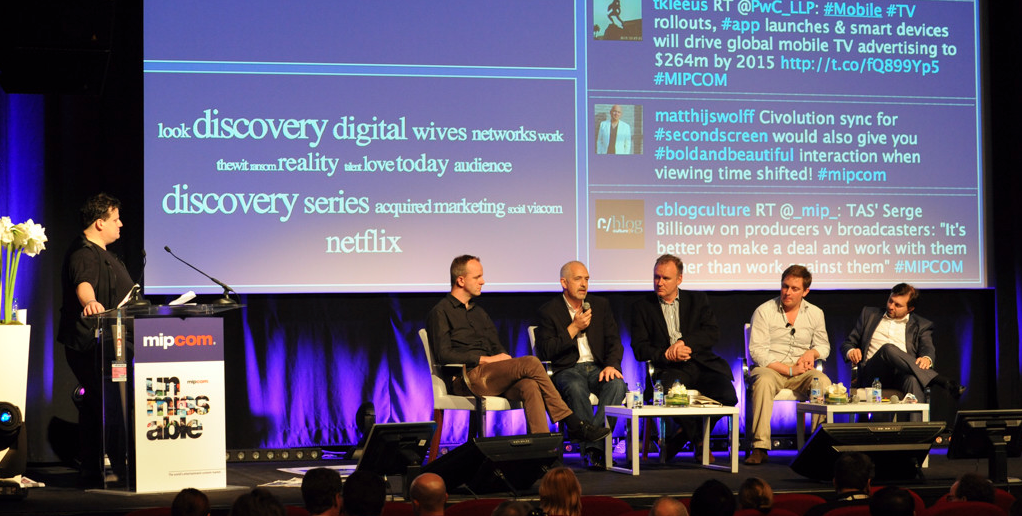 Which apps, technologies and services could disrupt the TV business, and how?
By Stuart Dredge on October 4, 2011 2 Comments

Print media and the music industry have faced intense, sustained disruption over the last decade from digital technologies and startups, but what now for TV? This afternoon at MIPCOM, a session focused on some of the companies aiming to disrupt – for better rather than worse – the world of television.

Elfferich was first to present. Ex Machina has a platform for second-screen apps around TV shows, and he talked about some of its current projects, as well as his theory on what second-screen should be all about. “Today, most of the second-screen examples we see lack meaning,” he said. “They have been bolted on to an existing TV show. We need to look for more meaningful examples.”

Ex Machina worked with Dutch TV talent show The Voice of Holland, which lets viewers predict what shows will be picked by the judges. “During the show you can also compare your predictions with the judges’, and see how well you’ve done,” said Elfferich, pointing out that Vodafone is heavily involved as a sponsor.

Another new format is called Intuitie, developed by FremantleMedie’s Screenpop division: “the first made for second-screen TV format… plus it has a business model,” explained Elfferich. The show has no studio audience or contestants, and airs in the daytime. A presenter poses questions that try to get the audience following their gut feelings.

The better the group – all viewers – played, the higher their overall score, which is then converted into discount vouchers for a different product every day. “It’s like a Groupon with a game mechanic, linked to a TV show“.

On to TV App Agency, which offers production companies a direct-to-consumer play by creating apps for connected TV. Andy Eardley said he wants to help TV firms be disruptive and game-changers in their own world.

“Ignore the data,” he said, by way of introduction. “The numbers are very small… and the downloads are in terms of millions not billions.” Eardley said the current connected TV market for apps is like the smartphone market for apps in 2007: small, but set to explode in the coming years.

Eardley showed off a connected TV app for UK property website Rightmove, saying that the property-hunting is by definition a shared experience, so suitable for TVs. It has also built a TV app for the Spanish BBVA football league, with a mixture of catch-up on demand video footage and other content.

Eardley also talked about the fragmented connected TV marketplace, with more than 20 different software development kit (SDK) variants from different manufacturers and operating systems. The problem for brands and TV firms: getting their apps onto as many of these as possible, to find a sizeable audience. “We’ve built a ‘write once, deploy to many’ platform,” pitched Eardley.

Next to present was Autonomy’s Mills to talk about the Aurasma project. It’s an app for iOS and Android that lets people point the device’s camera at an object – a newspaper for example – and then run video and interactive content, making static pictures seem to come alive. It’s a combination of image recognition and augmented reality.

“We have 500 commercial partners working with us,” said Mills, showing off an advert for the new Johnny English film, which overlays footage of star Rowan Atkinson on the print advert, while also encouraging people to watch the trailer and like the film on Facebook.

The Aurasma technology also works for t-shirts: Aurasma is the shirt sponsor for Tottenham Hotspur in England, and when an Aurasma-toting iPad is pointed at the shirt logo, football content pops up. “We think this is the future, and we think that working with people like you guys here [at MIPCOM]we can make it.”

Next up was Vision IPTV‘s Kennedy, to explain what his company is doing to disrupt digital TV in the UK with its ‘channels within a channel’ concept, both on Freeview and on iOS, Android and Samsung devices.

Vision IPTV is bridging the EPG (electronic programme guide) on Freeview and IPTV channels, making clever use of connectivity, aggregating lots of content that can be delivered through a single channel slot on Freeview. By the end of this year, 5.5 million people will have the HD set-top boxes required to use it.

Finally, Billiouw from The Application Store. “What if you could interact with your audience from anywhere using any device at any time?” he said. “Lots of people talk about social TV, and the only two words they use are Facebook and Twitter… They are not about interactions, they are about conversations.”

Hence Tapp: the company’s interactivity and billing engine that helps TV companies run quizzes, polls, chat, voting, social TV and m-commerce around their programmes. The platform runs on 95% of smartphones and tablets, and includes a billing engine that supports credit cards and in-app payments on iTunes.

The platform can be used to make smartphone and tablet apps for shows with all the social TV features, but people who already have their own apps can use the Tap API to put these features into the existing apps too. And the API works for apps on smartphones, tablets and connected TVs, as well as websites.

There was a Q&A section at the end of the section. Elfferich was asked about whether second-screen is causing harmony or conflict between producers and broadcasters.

“The good thing for end consumers is it’s much more about the content again,” he said. “The broadcasters have a lot of big brands that people are familiar with… production companies have a lot of IP… and of course telcos pass it all through. There is a role for everyone.”

Meanwhile, Billiouw was asked about revenue-sharing arrangements, when producers have created these kinds of apps and services.

“It’s all about rights basically,” he said. “If you have all your rights, you don’t need to share with the TV network.” Although he admitted that it is more common for producers to make a deal with broadcasters to share revenues in return for promotion of their show. “It’s better to make a deal and work with them rather than work against them.”