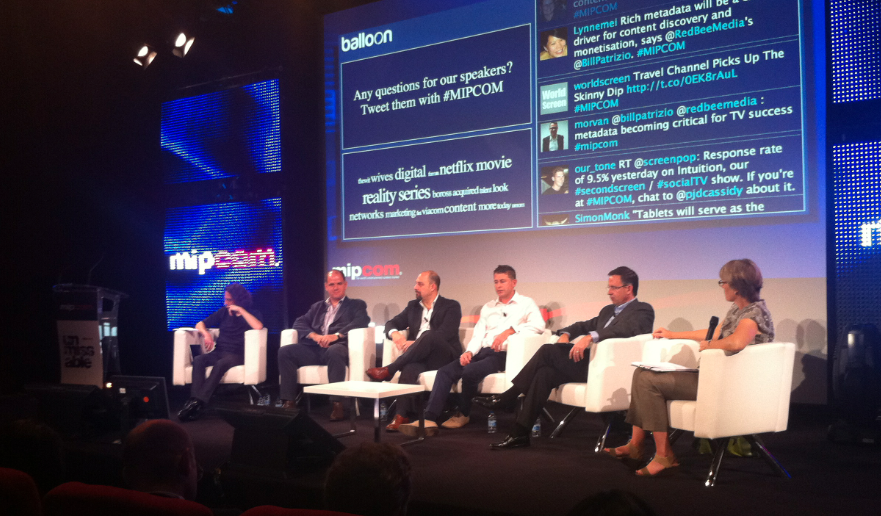 There’s a host of TV content online that can be accessed from PCs, phones, tablets and consoles, but finding the right stuff can be difficult for consumers. A panel at MIPCOM today discussed the challenge of discovery.

“What we all know is accessing content has never been easier… but finding the right content can be difficult,” noted Bulkley as an introduction, before handing over to Patrizio for the first speech.

“Content discovery isn’t a new area,” he said. “What’s changed now is how TV is being curated…” Red Bee has done some research in this area to find out what consumers are saying about their preferences for recommendations and social media in this area. He showed some video footage of British people talking about their interest in tablets, connected TV, and the idea of being recommended shows they might like, based on what they’re watching already.

“They want it kept simple: don’t over-complicate the EPG, the screen, etc,” said Patrizio. “The more it can be relevant to the individual viewer, the more powerful it will be… They are keen to maintain an association with a brand. It is important that the content that they do discover is curated by brands that they know and trust.” Which includes broadcasters, but also the likes of Apple and YouTube.

“The hurdle now is higher than ever to make your content stand out,” he said, suggesting that shows need to maintain a presence across multiple platforms, and establish deeper relationships with viewers. “You need to create content with the second screen in mind.” He also said that experimentation with new forms of monetisation is important.

“The EPG is we know it today is going to continue to exist, but it’s going to go through a mass transformation revolution,” added Patrizio, before suggesting that tablets will become the remote controls, and that motion controls will come into play too, spreading from their current use in gaming with Xbox Kinect.

Over to Viacom’s O’Ferrall, who talked about his company’s audience being digital natives, from its channels for children through MTV, Comedy Central and beyond. He admitted that the expectation of these audiences that every show should be connected has presented challenges – for rights particularly.

O’Ferrall stressed that Viacom isn’t forgetting its core business in the rush to make its content available on a range of platforms and devices. “My job is to drive people to TV: ultimately that’s the business we’re in,” he said. “However we do have to understand that our audience want to consume it on other devices.”

How does Viacom decide what to do digitally for different shows? O’Ferrall said it has to still be about great stories, great scripts, great talent and so on, and that some shows don’t lend themselves to some of these new digital opportunities.

Shazam’s Evan Krauss was up next, talking about the rationale behind people interacting with TV on a second screen. “Interactive TV platforms just don’t have the scale of mobile phones,” he said, before claiming that second-screen technology is not disruptive. “It doesn’t take over the screen,” he said, in contrast to interactive TV.

“But it’s also portable,” he said, as Shazam has noticed “the amount of interactivity that happens after people Shazam a programme or an advert. We’re seeing people experience it when they’re commuting to work, standing in line, at the dentist… The experience is happening while they’re not watching.”

Shazam’s mobile app can be used to ‘tag’ (identify) music, but also a growing number of TV shows and advertising campaigns in the US. The company is still adding more than 1.3 million users a week for that app. “That has doubled in the last seven months: our growth is actually growing!” said Krauss.

27% of people who Shazamed Old Navy TV ads in the US then went shopping from their sofas. “We have seen on average over 65% engagement after Shazaming,” added Krauss.

Next up was Tom Weiss of TV Genius, which was recently bought by Red Bee Media. His company had been working on social TV for three years. He cited a UK study by GfK showing that 47% of 16-34 year-olds regularly use social media while watching TV.

“On Facebook, your average person has got 160 friends, and your average friend has liked three different TV shows,” he said. Meanwhile, TV Genius has been monitoring tweets about popular TV shows in the UK in real-time, and has noticed that people don’t just tweet when an episode first airs: they also tweet when it repeats over the next days.

“The problem with Twitter is that the audience tweeting about these shows is not representative of the overall audience,” he added. “The people who are tweeting either really like the programme, or they hate it. It’s a subset of the audience but not a representative subset… It’s interesting, but it’s hard for us to then make a case to advertisers around that.”

Weiss noted that broadcast networks and TV platforms – the Skys of the world – are doing very little social media activity around shows, leaving it to what Weiss described as ‘parasites’ – startups and social companies – looking to create and curate social media buzz around TV shows. “Why are the platforms and the networks not doing that?” he asked.

The final speaker was Zeebox’s Rose. “My starting proposition is that people hate choice,” he said: people want to be given something to watch based on a smart recommendation. “Either a trusted source says ‘here’s the one’… or it can be the force of overall everyone what they’re watching – the most popular – or what specific friends are watching, or it can be a recommendation service… Everything from here on is about tweaking the balance between these propositions.”

Rose talked about the “design fail” of an EPG serving up hundreds of choices of shows and channels to watch at any given moment. “There should be a few things that come to you in each of these three or four different ways,” he said. That’s what Zeebox is working on: an app that can show a traditional EPG, or change it to just show what friends are watching, or the overall audience.

The session then segued into a Q&A, moderated by Bulkley. She asked O’Ferrall if he’s excited by technology like Zeebox and Shazam rather than, say, Viacom’s own second-screen apps. “I’m excited by any technology innovations that can help drive audiences to my brands,” he said. “Ultimately, audiences resonate around brands.”

Is there a worry about people discovering other kinds of content while watching TV? They’re only a tap away from Angry Birds or e-books, for example. “Actually what’s happening on the second screens, people find it complementary to the TV experience,” said Weiss, suggesting that people aren’t being distracted away from the TV screen by other forms of content on their smartphone or tablet.

“This is TV’s new best friend,” said Rose. “It’s not people moving away from live TV. It’s making live TV better for the next generation.”

At what age are kids becoming proficient in the use of tablets and devices? “Three, four: preschool. There’s no mouse and keyboard dexterity, but they’re great on the tablet,” said O’Ferrall. “It’s revolutionised preschool.” Weiss chimed in: “My three year-old is better at Angry Birds than I am, but my one year-old is more interested in chewing on the iPad!”

Rose was asked about how time-shifting fits into the Zeebox vision. He said that shortly after it launches, new features will be added with audio-synching so that people will be able to use the app’s features when watching catch-up TV too.

Krauss said he has just hired a team of people to work on Shazam’s TV-tagging business in Europe – thus far, it has only been in the US.