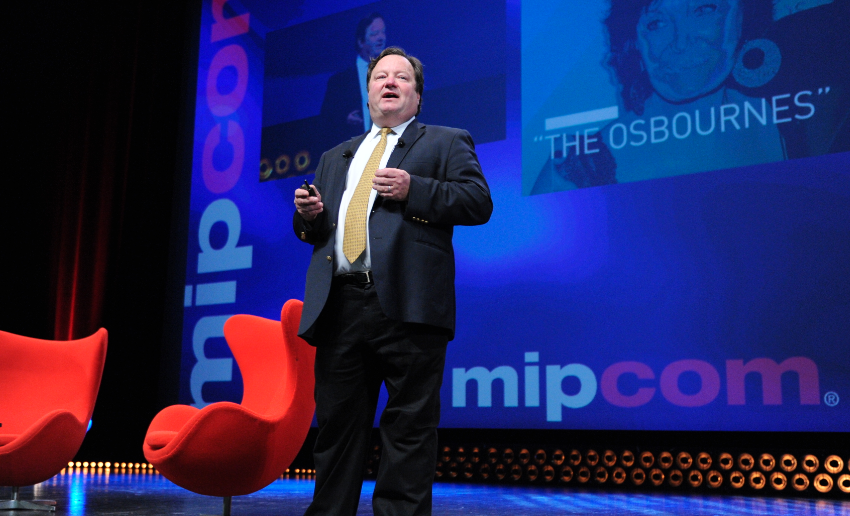 International Media Networks president and CEO digs into the digital value chain too
By Stuart Dredge on October 3, 2011 0 Comments

The second Media Mastermind keynote on MIPCOM’s first day featured Viacom International Media Networks president and CEO Robert M. Bakish. He took to the Grand Auditorium stage to give his views on growth prospects for geographic and sector markets, as well as the ever-evolving digital side of the business.

Change was the key theme of his speech. “Today’s environment requires that we be hard-wired for change,” he said. “For us that means constantly reinventing, or risk facing irrelevancy.”

He said that there needs to be a greater balance between global and local approaches for companies like Viacom – “something we call Glocal” – shown by the fact that between 2005 and 2010, the number of non-US originated shows airing in the US quadrupled. “Ultimately as a global media company it’s critical that we have this mix of product that capitalises on interest around the world,” he said.

How does Viacom do this? Bakish said “we let our audiences tell us where they wanna go” through detailed research. “Far from an afterthought, research today is an inspiration. It’s where we begin,” he said. “Research tells us where to go: when to be local, when to be global… in short, it drives programming, it drives marketing, and it drives monetisation. That’s our formula.”

He went on to talk about the ‘Millennials’ demographic, who are smart, ambitious and want to get content across many devices on their terms. How does this translate into MTV’s programming? “Reality has always been important to us, but we knew we needed a more authentic type of reality,” he said. How? He explained that the grittier reality represented by a show like the UK’s Geordie Shore, rather than the glossy likes of The Hills.

Bakish moved on to the Kids demographic. “More six year-olds know how to download an app than know how to tie their shoes,” he said, before reminding the audience that social networks were “brought into the house by the kids, and now their parents are on them too”. But Bakish said TV is still the centre-point for entertainment for kids: rather than digital platforms replacing TV, they are enhancing the shows of stations like Nickelodeon.

He also talked about comedy being “the ultimate form of self-expression” for young adults, because people feel their sense of humour says more about them than anything else. Viacom is trying to tap into this with brands including South Park and The Daily Show. There are currently 12 Comedy Central channels outside the US, with more to come, as it builds these brands internationally.

Viacom is also launching new channels, including Colors, a new set of Paramount film channels, and the global rollout of BET. Recently, it launched female-focused entertainment channel Blink in Poland, working with Endemol.

Bakish went on to talk about how research is having an impact on Viacom’s marketing. “In our experience, social media has become weapons of mass TV mobilisation. Think of social media as a telephone. Often we’re the conversation.” Viacom has more than 8.5 million Twitter followers for its various properties, while Bakish said that Geordie Shore in the UK is a case study in how social media works well (VIMN’s digital head Philip O’Ferrall guestblogged about this on MIPBlog last week).

“Before the show even aired, the stars had up to 3,500 Twitter followers each, and the Facebook page had 66,000 Likes. It was about creating a digital footprint before we handed it over to mainstream marketing,” he said. Now it has 52 million views on MTV’s UK website, 270,000 Facebook Likes and more than 100,000 followers on Twitter, after a single series. “It was the highest rated show in MTV UK’s history. Social media and television are a very powerful combination.”

Finally, research is driving monetisation for Viacom. Capitalising on “the involved advertiser” is a key part of the company’s strategy, helping people “embed and target their brands” in its shows. Viacom has revamped its advertising division as Be Viacom with the slogan “brand engagement solutions”, working across its linear and digital platforms.

Bakish cited a partnership with Volkswagen as a good example of this strategy in action. VW was the exclusive sponsor of the MTV World Stage live music franchise, which tied into the launch of the motoring company’s new Beetle car. “We reached over 28 million MTV fans during the duration of the campaign,” said Bakish, before moving on to international programme sales.

Viacom has 335 properties and around 10,000 total episodes available, with 12 new shows and three new formats available at MIPCOM this week. Bakish said that format localisation is increasingly important to the company, as shown by Geordie Shore again, which is effectively a UK localisation of MTV’s Jersey Shore. MTV has 65 shows available for local adaptation at the moment.

What about those alternative (digital) distribution options? Viacom works with Hulu and Netflix, while also launching more than 200 apps across its brands and countries. “As everyone knows, apps – which didn’t even exist two years ago – are taking up an increasing amount of consumers’ time versus, say, traditional web browsing.”

But Bakish finished his speech by returning to the theme of using research to understand its audience and the way they want to engage with Viacom’s programming, and acting on that to constantly reinvent the company’s business.