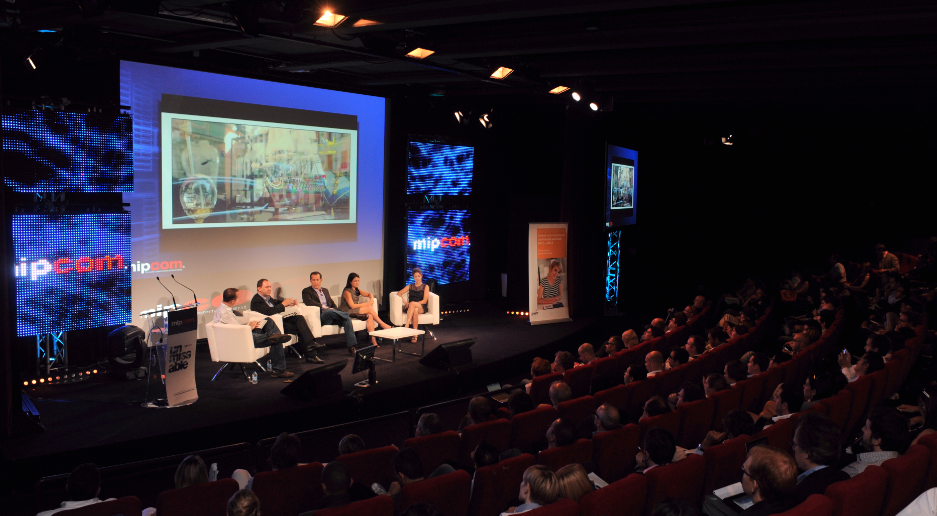 Social TV is a theme permeating most sessions at MIPCOM this year, as producers and broadcasters wrestle with the implications and potential of viewers using Twitter, Facebook and other social networks to share their views on the shows that they are watching.

“I’ve seen various things purporting to make TV more social,” said Goodchild as an introduction, harking back to red-button interactive TV in 2005, text-to-TV on late-night channels, and voting formats using SMS. “The thing that seems to have changed is that social has become ubiquitous on other platforms… The technologies to make it work with television seem to be getting closer.”

Slupowski kicked off the presentations part of the session, talking about Orange’s TVcheck service: an app that lets people check in to TV shows much as they would check in to locations on Foursquare, with additional social and game elements. They can also check in to advertisements to get more information.

“It’s something that is trying to use social TV,” he said. “We haven’t been creating social TV or anything. We’ve just seen that people are interacting in front of the TV, so we’ve tried to simplify the way they interact.” It’s similar to existing apps like GetGlue and Miso, so why would a telco like Orange enter the market? “Every time we do something, it’s first of all because we want to understand,” said Slubowski. “Social is probably one third of the application, and the other part is gaming.”

Rovi’s Besser was next to speak, about how the company is getting involved in social TV. The company’s business includes running TV guides on set-top boxes, which is an area it’s trying to personalise: “Figuring out who’s holding the remote control or sitting in front of that screen, and pushing relevant content to them.” Rovi also has a division focused on metadata, which is crucial to this kind of discovery.

“We believe that content curation is king,” said Besser. “Our research has shown that 83% of people clicking the guide button on their remote control have absolutely no clue what they want to watch… Whoever is putting that guide out there has to do a much better job of figuring out what you’re interested in. The vast majority of people are completely clueless.”

He also said that “social media and television need to converge in a truly meaningful way“, which doesn’t mean slapping Facebook updates on the screen while trying to watch something else. So Rovi joins everyone else in the industry (seemingly) in believing that second-screen social apps are the way to go, rather than putting social activity on the TV screen itself.

On to Facebook, and Karla Geci, who talked about what the social network announced at its f8 developer conference last month. Facebook is working hard on the idea of “how to discover content through the lens of our friends”, which is why bringing social to the surface of TV discovery services is really useful.

She also talked about the launch of “custom actions” on Facebook, which will let developers build apps to showcase what people are watching in real-time – going beyond the idea of merely ‘Liking’ specific shows. Cue updates in the social network’s new news ticker that (for example) “Angela is watching Creatures From The Deep on Hulu”.

Finally, FremantleMedia’s Tavernier gave her views on social TV. “We really thought about ‘is this something we want to interfere with? It’s already benefitting a lot of our shows…’,” she said, referring to the initial burst of activity on Facebook and Twitter around FremantleMedia properties.

“It took us a while to decide whether we should be doing anything. You know you’re not going to control that discussion, because you don’t want to… Why do something?” But FremantleMedia now looks at social media from three perspectives. “It has to either help us with the acquisition of new audiences, or it has to help us with the retention of our audience, or it has to help us monetise our audience. It has to do one of those three, or honestly, we should not be doing it.”

She stressed that social media helps acquire audiences for smaller shows – less The X Factor, and more new shows like UK game show Take Me Out. “But where we are currently getting a bit stuck is on the monetisation, to be honest!” she said. “Finding ways to make a profit out of that experience? I can’t say we’ve found the Holy Grail yet.”

Tavernier added that social media is bringing people back to television, and stopping them time-shifting in order to avoid “social spoilers“. Meanwhile, Facebook’s Geci and Rovi’s Besser both denied that all of this means the death of the traditional EPG: more its evolution.

Back to that monetisation challenge, though. Where is the money in social TV, or is it just another overhead for the industry to absorb? Slupowski thought advertising may have a role to play, with agencies and brands getting involved. Besser added that money comes from new ways to engage with a show – for example driving more live viewership (which is good for ads).

Geci said that Facebook is “a strange partnerships organisation… it’s less about deals and more about helping the people in this room to create these experiences in a smart way, and not recreate an on-demand exprience on the web inside a canvas on Facebook. That doesn’t make sense.”

Tavernier was asked about the likes of Apple, Google and Facebook’s position as the big players online.

“I am worried that there is such a dominance of players on the internet,” she said. “I dont think for the health of the industry it’s a good thing, to be honest. I think it’s dangerous… Eventually I would like to see more diversity.”

A lot of talk about social TV revolves around seeing everything that all your friends are watching or listening to. How long till this becomes a bit more sophisticated: drilling down into recommendations from just the friends who share your tastes in TV, music or other entertainment?

Geci said this is happening around more niche areas – cooking and running as one example. She also added that Facebook has the ability for people to create groups from their friends, which could be used to filter social recommendations. This may be something for geeks at the moment, she admitted. “There’s a whole other group: ‘This tailoring of my experience is still something I need to get my head around’. But that’s something that is available now.”

The panel were asked about how social media can be used to monitor TV viewing, but Tavernier warned again that while the social media audience is important, it’s not representative of the overall audience. “It’s good to measure impact, but it’s not yet good to have figures that you can rely on to understand volume,” said Slupowski.

Meanwhile, the panel finished with monetisation again. FremantleMedia has been running social games on Facebook based on brands like The Price Is Right and Family Feud, using Facebook Credits to make money. She said these are very profitable. “It’s also a model that lends itself very well to VOD, and of course voting is another element,” she added.