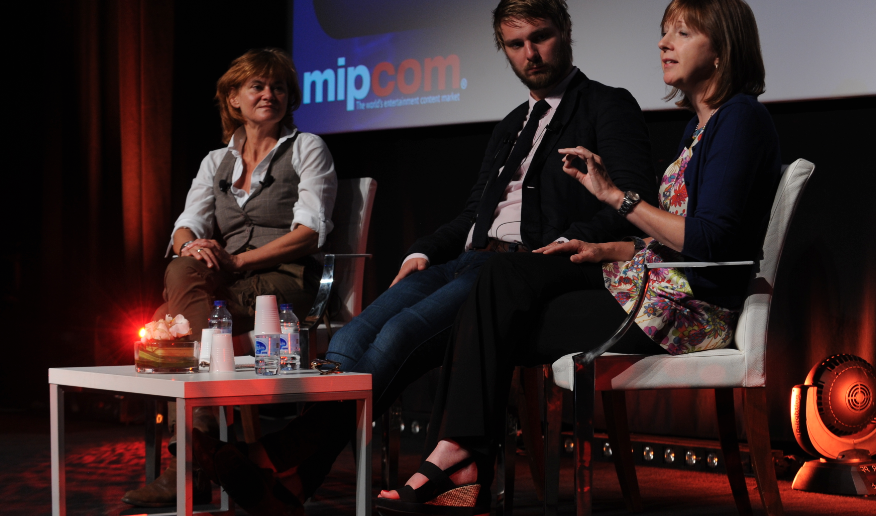 Danish Broadcasting Corporation and BBC discuss one of the breakout drama hits of 2011
By Stuart Dredge on October 5, 2011 0 Comments

Scandinavian crime drama The Killing has been one of the breakout TV hits of the last year, fuelled by strong word of mouth buzz both on social networks and in real life. Today, a MIPCOM audience heard from two of the broadcasters involved on how it became must-see TV.

Peter White (centre), deputy editor of Television Business International magazine moderated the discussion between Piv Bernth (left), producer at the Danish Broadcasting Corporation, and Sue Deeks, head of programme acquisitions at the BBC in the UK.

Bernth explained how the show came about. “It started off as a feature film idea,” she said. “When I thought about it, I said why not try to make it a broader story and make it into a series?”

The show approached the investigation on a day-by-day basis, examining both the police investigation and the impact of a murder on the victim of the family. “The main tagline of the show is ‘We are all in this life together’ – if something affects someone over there, it is going to affect you over here.”

Bernth was asked about the role Copenhagen plays in the series. “Copenhagen is very dark and very rainy and very cold and very windy!” she laughed. “The city of Copenhagen has a part in the show, it’s right.”

She also talked about the way The Killing came together as a project. “People started shaking a bit: ‘one killing in 20 episodes?!’ They said ‘please do have some killings ready in case it gets boring!’ They wanted to have it ready in case it didn’t work out.”

The Killing first aired in 2007 in Denmark, and gradually rolled out to other Scandinavian countries, then Germany (2008), Austria (2009), Belgium, France, Germany and Australia (2010) and the UK and Russia in 2011. And it was the BBC’s screening of the show in the UK that created such a buzz this year.

Deeks said that the BBC probably couldn’t have taken The Killing in 2007 when it first aired in its home country: it took that gradual build-up of other crime dramas to set the scene for running a 20-episode drama of this nature. “When we played the first episode of The Killing, it just got a really big audience for BBC Four, and all the critics latched on to it. It just became a phenomenon.”

Bernth added that the combination of British success and a US remake has given the original series a new life in markets like Spain, Italy and Latin America. What about that remake? AMC is the channel behind it (not to mention other shows Mad Men and Breaking Bad). There’s a different killer, even if the look and feel and central character is similar.

“They have kept the characters and the development of the characters, and the relationships, but adapted it to American life,” she said. “You could fear that if it goes into America that it would be very American: hard-hitting, bright colours, high tempo.” But that’s not the case, she said. “The sense of the show, I think, is the same.”

Bernth talked about the casting of actress Sofie Gråbøl as lead character Sarah Lund, including her famous jumper. “It’s itchy, very hot and a very expensive jumper. And not very nice, I think!” she said.

Back to Deeks, who said the BBC was “more than happy” with the ratings for The Killing during its UK run. Episodes were shown in double-bills on Saturday nights, in the slot previously occupied by Wallander. “It made sense, because you get such an emotionally intense series, you needed the two episodes,” she said. “If you’d had to have gone for just one episode a week, it’s quite a lot to hold in your head.”

Bernth and her team are currently working on the third season of The Killing, with the second having already aired in Denmark. What can people expect?

“For season two we discuss how much we have to bend democracy to preserve it, or to keep it or defend it,” she said. “How much can we do with it and still have it. We still have the political plot, the crime plot, and the third plot is the military… about the Danish participation in the war in Afghanistan. It’s a little harder and tougher than the first one.”

And the third? “It will be about the recession: the financial crisis and what it does to us… how people get greedy, and we are still in it together, but we are fighting each other even more.” The BBC will be airing series two from next month in the UK, and it has plans to air the third season too, Deeks confirmed.

What is happening around The Killing online? Bernth said that the show has a very good website in Denmark, where fans can visit and even bet on who they think the killer is. But the broadcaster is letting the social media buzz around the show remain organic. “Danish Broadcasting are not very active on Facebook and Twitter and stuff, but we might go into that in the next year,” said Bernth.

She also talked about the global popularity of The Killing. “We started to make it for the Danes, and then for the Scandinavians, and now it’s all over the world,” said Bernth, who admitted that there are “so many requests” for localised remakes, although so far only the US version has been licensed.

Why go for only 10 episodes in the second season? “It’s because of the intensity of the story,” she said. “When we see the 20 episodes [of the first series], we reflect that it’s perhaps five episodes too long… I think that the second season is even more intense than the first one. It has a little more pace to it, but not that much.”

How to follow up The Killing, though, beyond more series? Deeks said that the BBC is viewing a lot of things. “The one thing that we look for is high-quality, distinctive, original – whether that’s crime drama or any other genre. It just happens that we’ve had this rich vein of crime drama… but we’re really open to anything else.” She also said that she gets emails from members of the public with their own tips for shows that may be worth acquiring, as a result of The Killing’s popularity.

Meanwhile, DBC is working on a new show called Veronica, and another crime drama in development about economic crime with the working title ‘Follow The Money’ – “if you want to solve the crime, you have to follow the money,” she said.