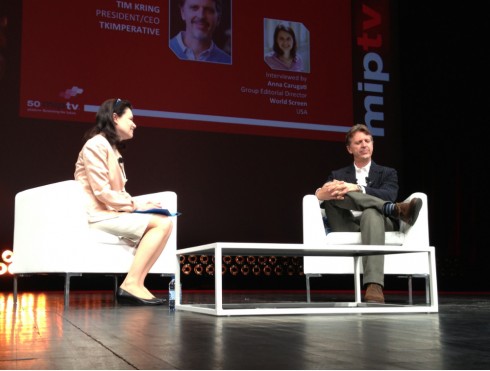 The MIPTV Tech Wrap: Audiences vs users, binge-viewing and the ‘Wild West’ of online TV

Digital issues weren’t just front and centre at MIPTV and MIPCube 2013: they were buzzing round the sides and sneaking up on delegates from behind, too.

Excitement and arguments around digital disruption for the television industry were everywhere you turned during the conference. Here are some of the key points picked out from MIPBlog’s live coverage.

An excellent place to start is April 7’s MIPCube PLUS session where Somethin’ Else’s Paul Bennun outlined an important discussion for the industry: telling the difference between traditional audiences, and the new generation of ‘users’ of their content.

“Making differentiation between audiences and users is the most important thing we can all do to safeguard the industries we work in,” said Bennun. “Audiences are passive bodies of people. Users are active. Users actively operate systems. Audiences passively consume programmes. For us, this is the fundamental driving idea behind all the projects that we design.”

He went on to note that the challenges posed by this difference extend to the way the industry measures its success. “Audiences are measured by voodoo! Users are measured by numbers,” said Bennun. “Google and YouTube do not measure their users by a 5,000-person sample.”

YouTube, of course, has a lot more than 5,000 people watching videos on its site – it’s up to 1bn monthly active users in 2013, which offers huge scale for producers. Yet there were some interesting discussions during MIPTV about scale, and whether it’s as important as engagement: people subscribing to channels and watching lots of a creator’s videos.

“There are things that matter more than scale, and I believe that engagement is one of the most important metrics today, and in the future,” said Blip CEO Kelly Day at MIPCube PLUS (admittedly while pitching her company’s video site as a valuable alternative to YouTube for brands and ad buyers).

Yet producers are finding this engagement on YouTube too, especially multi-channel networks (MCNs for short) like Machinima. Its CEO Philip DeBevoise outlined some stats during a session on building a loyal audience online: 210m monthly unique users, 1.9bn monthly video views, and viewers who “spend over 100 minutes a month watching our content”.

How about viewers spending over 100 minutes in an evening watching someone’s content? The phenomenon of “binge-viewing” – watching entire series in clumps of episodes, or even in a single weekend – was a big topic at MIPTV this year, fuelled by Netflix’s decision to release all the episodes of series like Hemlock Grove and House of Cards at once for fans to binge on. 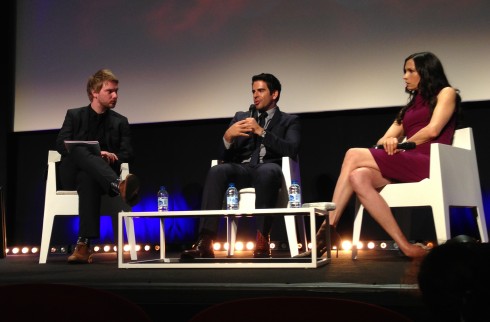 “It’s up to the viewer’s discretion how and when they want to watch it,” said actress Famke Janssen during a Hemlock Grove session.

“It’s really nice, and it gives you a flow that you miss in the traditional way of watching television on a weekly basis.” The show’s director Eli Roth agreed, and added that there were creative implications: “It changed the way you could edit things. We didn’t have to have the scare of the week or the monster of the week.”

There has been plenty of discussion in the past about the consumer appeal of binge-viewing, but the knock-on effects for creatives are just as interesting. Former Heroes showrunner Tim Kring has lots to say on this score during his keynote interview at MIPTV, too.

“The idea of watching these shows in a condensed period has almost taken over from the idea of reading a book… people used to say ‘I’m reading this really great book’. Now they say ‘I’m midway through the third season of Breaking Bad’,” he said.

“It’s also changing the length of these series and the way we are thinking about the number of episodes. In the same way that a song is two and a half minutes on the radio, or a movie is two hours in the movie theatre, 10, 12 or 13 episodes seems to be the right length for this binge-viewing that people want to do.”

One of the other trends at MIPTV was the sense of established TV producers trying to make order from the (exciting) chaos of the online video world, learning from the successful multi-channel networks and applying this to their own content.

The keynote from Endemol’s Tim Hincks was very good on this score, as he outlined his company’s approach to YouTube. “It is the Wild West, it’s anarchy. So the idea of treating YouTube – as some people tended to do a year ago – as an alternative to a broadcaster is in my opinion not right, or at least not the whole story,” he said.

Hincks advised TV companies to stop thinking about how many videos or channels they had on Google’s service, but how to forge better links between them and use cross-promotion smartly.

“It’s not how much you’ve got, it’s what you do with them. It’s tying them together and marketing to the consumers and YouTubers on the different channels. One of the things we’re trying to get access to is the advertising dollar, and to do that you have to have scale.” And engagement, of course… 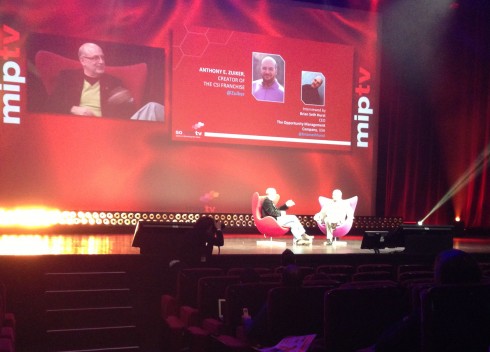 It was clear from Tim Kring’s views, and the separate keynote starring CSI creator Anthony E. Zuiker, that individuals within the TV industry are relishing the creative chaos that online is bringing.

“The number one rule in doing content for the web is to make sure the content is specific to the device. You can’t just move television over to the web, and vice versa,” said Zuiker, whose online work is increasingly funded by brands rather than broadcasters.

“Our slate’s about 80% web and technology, and about 20% day-job television. That’s how busy we are in this technology world, because the demand is so huge. Brands are saying ‘we don’t find a lot of value in the 30-second spot any more. ‘Help us find things that have a shelf-life and have scale’.”

Other takeaways from MIPTV’s digital sessions? Mobile loomed large, again, with plenty of talk about second-screen and branded apps. However, MIPCube PLUS attendees were given a stark warning that the world of apps holds just as many pitfalls for content creators as it does potential.

“App stores are an unrelenting torrent of absolute crap that you have to navigate to find what you want,” said Ian Wharton from British developer Zolmo, who didn’t mince his words. “Anyone can make an app and submit it, and millions of people can download it. And the quality is not premium, by and large.”

The app stores are haystacks, and your TV apps are just yet more needles trying to be found by users, in short. Yet there was also positive (yet realistic) talk about the growing importance of mobile viewing from Anne de Kerckhove, managing director for France and Southern Europe at Collider, in her Maximising digital and TV content value across platforms session.

“We don’t talk enough about mobile probably yet at MIPTV, because it’s not a medium we’re particularly comfortable with yet, but it’s extremely powerful,” she said. “Smartphone penetration is immense, and we use our phones to watch content all the time.” 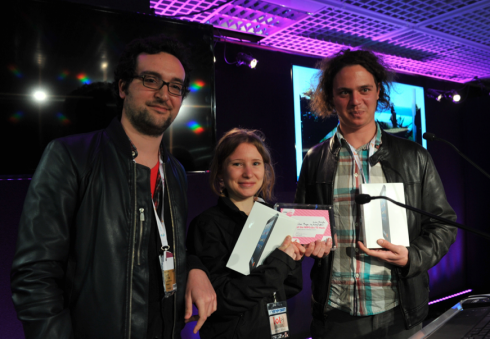 Thankfully, there are still plenty of startups and developers thinking creatively about how to help people discover and watch TV shows and video content.

The MIPCube TV Hack threw up some excellent ideas, including Metricator – a slick way to watch the most popular current videos on YouTube – and Twitter Timelord, which rolled back people’s Twitter timelines when watching shows on catch-up, so they could see tweets posted at the time they originally aired.

Social teletext, a teddy bear-shaped TV companion for kids also starred, along with the TV Hack winner: Reactive Video Player from Andrei Gheorghe and Audrey Martel, which was a way to control multi-camera footage through gestures.

Meanwhile, Israeli startup Stevie, whose apps turn online video and social graphs into a “beautiful broadcast TV experience” through apps, won the MIPCube Lab startups contest, and is certainly one to watch.

It’s fun, interesting and important to talk technology at shows like MIPTV, but I was taken with BSkyB’s Sophie Turner Laing’s reminder that it’s just as vital not to forget about the actual shows and videos we’re watching on these apps and digital services.

“I always hear a lot about disruptive technology, but is that really the right word? Do customers want disruption? That sounds uncomfortable! Do they want to binge constantly? Sounds life-threatening! Or do they want convenience, flexibility and simplicity? Those are all much better words in my experience,” she said.

“Let’s stop talking about the bloody pipes. Let’s talk about the shows, because that’s what we’re all here for.”

Tim Kring offered his own gentle warning about getting too carried away with suggestions that digital distribution is throwing down the traditional barriers to entry in the TV market, too. “The ubiquity of the pen doesn’t mean everybody’s Hemingway. You still need to tell a great story,” he said.

For all the digital fun and frolics at MIPTV 2013, Kring’s words were a healthy reminder that the most exciting thing about all these technologies is the fact that they’re helping great storytelling (and storytellers) find their audiences.

Stuart Dredge is an official MIPTV/MIPCOM liveblogger (read all his posts here) and tech blogger (The Guardian Apps Blog, MusicAlly, The Appside). Be sure to follow him on Twitter here!