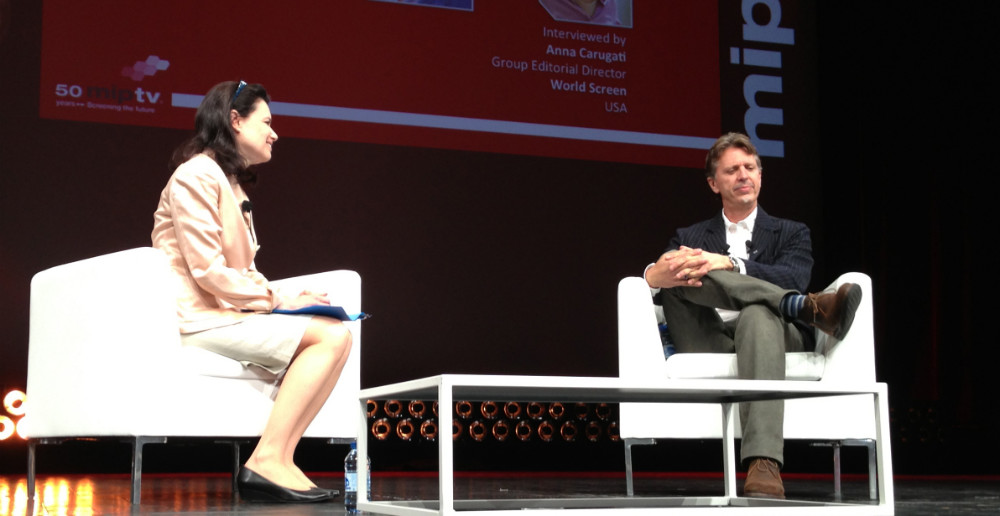 But Heroes creator warns MIPTV that "the ubiquity of the pen doesn't mean everybody's Hemingway...".
By Stuart Dredge on April 9, 2013 0 Comments

His best-known TV show may be Heroes, but Tim Kring is also famous for his willingness to push the creative boundaries in taking his storytelling across different devices and platforms.

Kring appeared in a Media Mastermind session at MIPTV today titled ‘Redefining TV’ for a session discussing his past and current projects, his experience working with brands and his views on new TV habits like binge-viewing.

Kring said that from early on in his life, he’d been interested in big questions about the meaning of life, but that his early TV career as a writer involved taking any project that came his way rather than picking and choosing based on a particular principle.

Kring’s first show of his own, where he was the showrunner, was Crossing Jordan, which aired between 2001 and 2007. And it was here that he found the two key themes that have characterised his work since: interconnectivity, and promoting “positive change in the world”.

Crossing Jordan was in its early production when the 9/11 terrorist attacks happened in New York, with Kring saying now that he was struck by the contrast between the “strange and phony” make-believe world of a TV drama, and the genuine tragedy in the real world.

“I started to really want to say something about what had happened,” he said. At the time, this took the form of an episode called Miracles and Wonders, about a daisy-chain of events connecting seemingly-unconnected people together.

“It was this one idea for the show that actually got me realising that was a subject I really wanted to talk about: interconnectivity, and how people’s lives are reflected on one another and shine on one another,” said Kring.

This happened at a time when people were beginning to watch TV in a different way, chatting about it online and watching video on the web and on mobile devices. Realising all this was the spark for Heroes.

“I had no relationship at all with my audience,” said Kring. “The next show that I wanted to create, I not only wanted to use this concept of interconnecivity, but also to have people try to connect to the show in these new ways.”

Heroes had masses of content available outside the show itself, distributed online and through mobiles. Kring admitted that these extensions were initially “really about promo and about marketing for the show”, but said he swiftly realised they could be more.

“What we realised was it was actually a way to take story that we wanted to put out into the world and actually have it live on these different platforms… There was no wasted piece of the narrative. We used every part of the buffalo… We now had a universe, a story-world that we created that could be accessed from different angles. That was something that was a brand new way of thinking.”

After Heroes ran its course, Kring worked with Nokia on a multi-platform project called Conspiracy for Good, which started online, moved to mobile and ended up on the streets of London as an alternate reality game, complete with 40 actors interacting with viewers/players/users (delete according to preference).

The impact wasn’t just on those participants though: the project helped fund stock libraries in Zambia with books – part of Kring’s desire for his work to have positive effects in the real world.

“None of us had ever done anything like it before, neither was there any template for it,” he said. “But it had this very powerful effect on people that were involved with it. There was a realisation that narrative and storytelling is this really powerful tool to get people to come out oftheir homes in the real world and do something.”

Nokia was the first brand that Kring had worked with on an entire project in this way, although brands had been involved in Heroes in a more traditional sense. He’s very positive about the growth of branded content now, and the opportunities for creatives that it brings.

“Brands are getting more and more involved in having a relationship with storytellers. Now that brands have access to their customers – that I would call an audience – it now behooves them to crete relationships directly with storytellers,” he said, harking back to the days of the very first soap operas, when this was common.

“I think that’s actually coming back in a very big way. My kids seem to be very comfortable with the idea that somebody’s paying for their content. Working with brands is now a real opportunity to create some pretty powerful stuff.”

More recently, Kring worked on a project called Daybreak with AT&T – an original online drama series involving 50 minutes of content – the same length as a television pilot, with production values to match.

“We probably spent close to the same amount of money on it that we did for a big pilot, and it proves that these things don’t have to be a stepchild to the big Hollywood productions. They actually can be quite large,” said Kring, who said that brands are keen as mustard on such projects, in comparison to traditional TV advertising.

“The 30-second spot is becoming a problem for big brands with the fact that you can skip through them, and you never know who’s watching. It’s not a very targeted way to reach people,” he said. “Audiences really feel a kind of kinship with a brand when they feel that that brand made it possible for them to be entertained for an hour.”

Kring was asked about the impact on-demand viewing is having on creators, and particularly about the trend for “binge-viewing” a lot of episodes in a row on services like Netflix. How does this affect his work, if at all?

“It’s hard to know what the implications are going to be,” he said, but with enthusiasm rather than foreboding. “Firstly, the idea of watching these shows in a condensed period has almost taken over from the idea of reading a book… people used to say ‘I’m reading this really great book’. Now they say ‘I’m midway through the third season of Breaking Bad’…”

This isn’t true for everyone, of course – and it may well be more true among the social groups of people involved in the TV industry like Kring – but he also had some interesting thoughts on the impact binge-viewing is having on the way TV is made.

“It’s also changing the length of these series and the way we are thinking about the number of episodes,” he said, reminding the audience that 22-25 episodes used to be the norm for big drama series, in the US at least.

“You’re finding now, I think, that this new way of watching is helping to determine the optimum length for these shows,” he said.

“In the same way that a song is two and a half minutes on the radio, or a movie is two hours in the movie theatre, 10, 12 or 13 episodes seems to be the right length for this binge-viewing that people want to do.”

Kring was optimistic about other shifts in TV viewing habits, and the plethora of platforms available for distribution of television. He noted that the broad audience of yesteryear may have fragmented, but it means creatives can find a “deep” audience instead, even if it’s a niche one.

“It’s certainly easier as a writer to find a platform: there are more ways to reach an audience,” he said. “The ubiquity of the pen doesn’t mean everybody’s Hemingway. You still need to tell a great story.”

Kring finished off with some information on his current project, an “alien invasion show that has no aliens and no invasion” called The Drake Equation, which from the very beginning of the project has multiple platforms baked in.

“It’s a real-time digital narrative that exists all around you,” he said, explaining that fans will be able to tap into the story throughout the week through applications and mobile content, among other ways. Kring said he’s extremely comfortable with the two-way interactions that result.

“I still think of myself as a freelance writer,” he said by way of conclusion. “But it’s less about making television for an audience, and more about making it with the audience.”