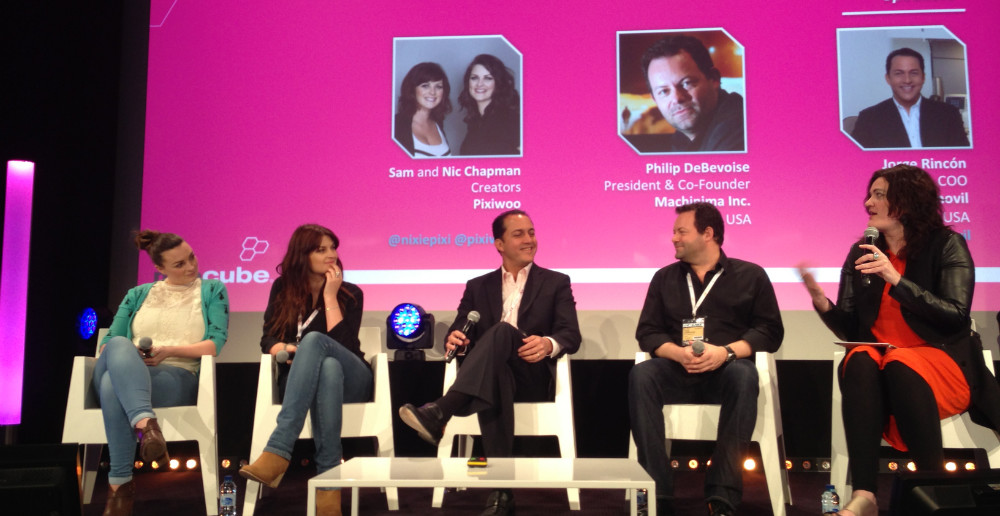 Liveblog: Pixiwoo, Machinima and Adsmovil on building a loyal audience

MIPCube Talks session focuses on how to attract, build and scale an audience for your content.
By Stuart Dredge on April 9, 2013 0 Comments

How can creators, brands and other content publishers build loyal audiences online and on mobile? That was the focus for a panel session at MIPCube this morning.

The panel comprised Sam and Nic Chapman, creators of YouTube channel Pixiwoo; Philip DeBevoise, president and co-founder of Machinima; and Jorge Rincón, COO of Adsmovil. It was moderated by Louisa Heinrich, founder of Superhuman Limited.

Rincón kicked off, talking about his mobile advertising company’s work in the Americas, including the 2012 presidential election in the US.

He noted that the Hispanic population is growing fast in the US, and outpaces the general population in the adoption of smartphones. 49% of US Latinos own a smartphone, and three quarters of Hispanic internet users say they go online from mobile devices.

Barack Obama’s team ran a mobile advertising campaign through Adsmovil around the election, based on the potential impact that the 52m Latinos in the US could have on deciding the next president. He ended up taking 71% of the Latino vote, although obviously, there were other factors than just the ads.

Next up came the Chapman sisters, who’ve been makeup artists for 17 years, but who more recently have got nearly 1m subscribers and 150m views for their YouTube channel.

The pair use all the social media platforms: Pinterest, Twitter and Facebook, directing people to YouTube to watch their videos. “We interact with them, we talk to them. If they ask us questions, we answer,” said Sam.

Next up was Machinima’s DeBevoise. “We’re going through a revolution right now: a third wave of video programming,” he said. The first wave being broadcast, and brands like CBS, ABC and NBC. The second wave was cable (ESPN, MTV, HBO etc). And this third wave is online, with brands like Vevo, Hulu and Machinima emerging.

“These channels are huge and they have very huge, dedicated audiences,” he said. Machinima reaches 210m monthly uniques and serves 1.9bn video views a month, with 707m of those on mobile devices. And this audience is very engaged, liking and commenting on videos. “They spend over 100 minutes a month watching our content,” he added.

The content started by being focused on videogames, but has expanded to science fiction, comedy, drama, action and sports, for its predominantly young, male audience.

“In the internet, you can go extremely deep if you stay focused,” he said. “Because of these platforms, because of the reach you have around the world, you can go quite massive… We think hitting 300 million users a month, 400 million is quite achievable for us.”

Pixiwoo talked more about their channel, and the breakdown of their audience. “Our secret is we upload content really regularly – we upload two videos a week – and we try to interact in every social medium there is,” said Nic.

“We stay honest, we try to reply to every comment, or as many as we possibly can without being repetitive, so our fans – our subscribers – still feel we’re the same as them. We’re the middle ground: the celebrities that are completely untouchable, them sitting at home, and us in the middle.”

And is it profitable? “It’s very profitable,” said Sam. “There’s lot of opportunities that open themselves up to you when you’re as big as we are.” That includes branded brushes sold in retailer Boots, as well as contracts with brands to make videos. “It’s on their platform, so they have control of that, whereas we have control of what goes on ours,” said Nic.

DeBevoise was asked about how Machinima is expanding globally. It’s launched in Brazil, while also programming a Machinima Latino channel for the US, with Machinima UK live in beta, and France and Germany to follow. “Stay local and stay relevant. That’s the most important thing for building that audience: to stay relevant to them.”