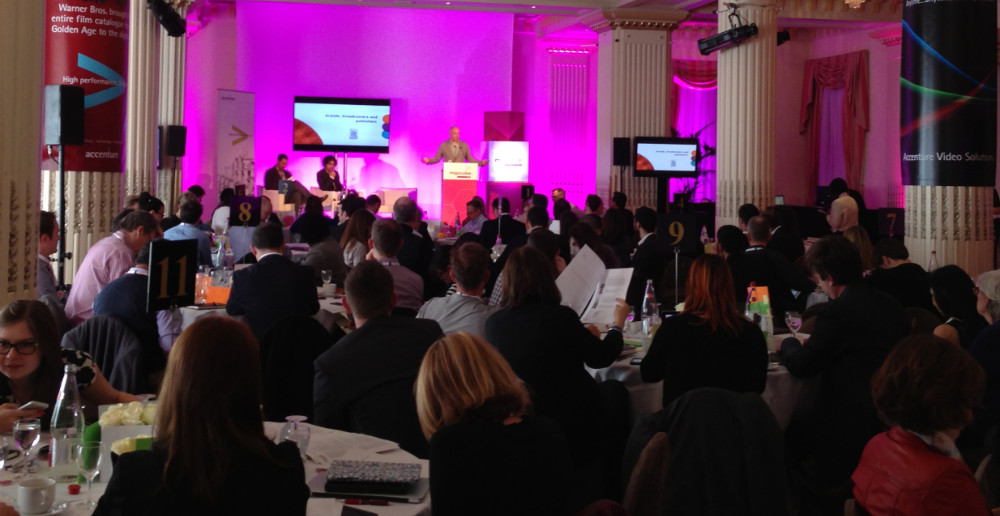 MIPCube Plus starts with a bang with second-screen, connected devices and the digital future of TV
By Stuart Dredge on April 7, 2013 1 Comment

This year’s MIPCube conference kicked off with a one-day think tank called MIPCube PLUS, with 150 participants from broadcasters, production and distribution companies, online content firms and startups chewing over digital issues.

The day kicked off with some opening remarks from host Chris Thompson, director of UK agency Gray Digital.

“Today is ultimately about the new world of the connective user,” he said, noting that viewers have moved from passive to active modes when watching and interacting with television.

The first session proper came from Guillaume Morel, broadcast and entertainment director at Accenture, giving his vision on the future for media and entertainment over the next 5-10 years. Starting with Bruce Lee.

And this idea of creating your own hybrid system of techniques is one that Morel thinks applies well to the companies who’ll be successful in media and entertainment in the next decade. “The companies that will have created their own model that is totally linked to their DNA. There is not one vision, one model…”

“Innovation has to be really owned by the leadership, which has to push it… as part of the DNA of the company,” added Morel. And its target should be to create new markets. “Let’s think of a big blue ocean of users,” he said, referring to the 2005 book and business-theory Blue Ocean Strategy.

“It means creating new forms of content, new forms of services and new experiences for users, and being the first doing this.”

Morel was followed by a two-handed session on ‘How to create for an audience of users‘, covering second-screen viewing, smart TVs and the opportunities thrown up by the proliferation of connected devices around the home (and outside it).

The insights came from Paul Bennun, chief creative officer at Somethin’ Else and chair of Artangel, and Julian McCrea, CEO of Portal Entertainment.

“We don’t believe there is any one single way to do it,” said Bennun. “We believe that it’s a process, that it’s an incredibly important process, and that making differentiation between audiences and users is the most important thing we can all do to safeguard the industries we work in.”

Bennun talked about the difference. “Audiences are passive bodies of people. Users are active: they operate systems. Users actively operate systems. Audiences passively consume programmes. For us, this is the fundamental driving idea behind all the projects that we design.”

He also noted that systems are “never finished” – they’re constantly evolving, based on deep analysis of the data on how people are using them. And in contrast, he pointed to the science of audience measurement. Well, I say science…

He added that software designers and industrial designers have much to teach the media and entertainment industry about “user-centred design” – thinking from the perspective of a user when “designing content for consumption at scale”.

Bennun talked about Somethin’ Else’s The Nightjar app, an audio-only iPhone game which was a partnership with chewing-gum brand Wrigley, including voice narration from actor Benedict Cumberbatch. It was released in the UK alone, although it will be re-released internationally as a paid game on 23 May.

McCrea took the stage next to talk about Portal Entertainment’s vision and work. But he started with Alfred Hitchcock, and his move from theatre into film. It made McCrea think: “What would Alfred Hitchcock tell today? I don’t think it would be a film. I think it would be a story that uses all the devices we have available to us, and I think we’d be taking part in them.”

This is what Portal is up to. “Portal Entertainment believes an audience will pay a premium for immersive entertainment delivered to where they are,” said McCrea about his company, which is funded by a mixture of government grants and VC/angel investors. “We don’t speak to broadcasters, so we are very much a startup that is looking to disrupt what’s about to happen.”

A big part of that is understanding how audiences like to take part in stories, including using technology to analyse their facial expressions.

“How would understanding an audience’s level of thrill change the way that we do content discovery?” asked McCrea, noting that TV’s current dominant mode of discovery is marketing from broadcasters, and electronic programme guides (EPGs) on television sets.

“Us as a company think that is fundamentally broken,” he said about something launching today: a discovery tool called Thrill Me. It’s a discovery service that helps people find horror, mystery/suspense and thriller content, based on how thrilled they are – using their face.

It works out who’s in the room, shows two trailers from these categories, and “we measure your anxiety levels in real time, send it to the cloud, do the processing in real time and come back with a recommendation on which of the two trailers you’re more thrilled by.” Thrill Me is being shown off at MIPCube this week.

McCrea thinks it’ll help the makers of these films, because people will buy more content. And this led into his bullish views on the value of content in 2013.

“Content is the most valuable thing on the planet right now, whatever the VCs tell you about distribution platforms,” said McCrea, before moving on to other Portal projects. The Cratsman will be “a five-day thriller for your iPad” – an app that people will pay for – based on themes of voyeurism. It’ll be released in early June.

Second, there’s a project coming out at the end of 2013 with thriller writer Peter James, based on his detective character Roy Grace:

“A five-day thriller for the smartphone. Again, it’s an app that you buy with money. And the audience take on a particular role within that… they help and come into the world of Roy Grace in terms of helping to solve a particular thrilling conceit.”

Which comes back to the question of what Alfred Hitchcock would be making today, if not films. Experiences, instead. And McCrea finished off with a glimpse at what he hopes is the future for these kinds of experiences.