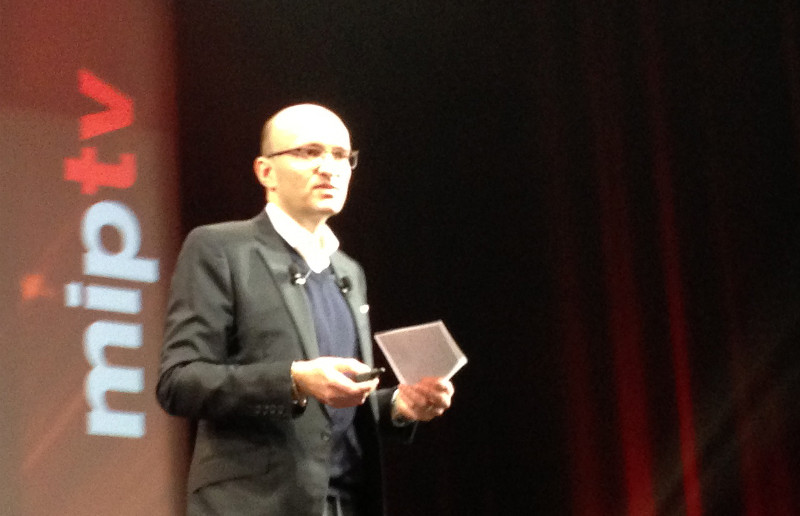 Including why 'it's essential now to have a different relationship with audiences' in the digital age.
By Stuart Dredge on April 8, 2013 0 Comments

These are changing times for the television industry, with broadcasters and producers alike grappling with the implications of digital trends like YouTube channels, social media and second-screen apps.

For Tim Hincks, though, this is exactly why 2013 is an exciting time for the industry. As president of Endemol Group, he has a good vantage point too. In a MIPTV Media Mastermind keynote today, he outlined his five-point “creative manifesto” for the company and its peers to prosper.

“This is an absolutely fantastic time to be a creative: in some ways I think it’s never been better,” he said. “The opportunities are extraordinary for us all… but we need to think slightly differently about creativity and content, and in particular about how we market that content and talk to the audiences out there in a slightly different way.”

The first point in Hincks’ manifesto: looking after the brands that you have already, with Big Brother the obvious example in Endemol’s portfolio.

“It’s incredibly important to keep brands alive,” he said, referring to the typical 3-5 year cycle for even successful shows. “How do we make sure our brands, or at least a significant number of them break that notion of the five-year cycle?”

Hincks described Big Brother as “resurgent” in 2013, with technology playing a key role – video downloads in Australia, a 3D version in Brazil – alongside traditional TV values like good casting.

“You have to use and market it in a way that means every new series is like the first series,” he said. “It’s about refreshing and keeping that brand special.”

The second point in the manifesto was diversification. Hincks stressed that Endemol is “back in the game of M&A” in 2013, despite the group’s well-publicised financial troubles in recent years. “The right deals for the right amounts, not [just]for the sake of doing them. But you will hear more on that coming through.”

For Endemol, diversification has also meant moving into scripted formats, with 66% growth in that sector over the last four years, to the point where scripted now accounts for a quarter of the group’s business.

Point three was the reminder that “the world is getting bigger, not smaller”, with Endemol launching 175 formats around the world in 2012, with around 60 of them being new formats created within the group.

Hincks pointed to shows like The Next One in Italy, The Brain and Unbeatable in Germany, Wall of Fame in the US, Grading Mum and Dad in Holland and Your Face Sounds Familiar in Spain as prime examples of inventive formats coming from countries other than the US and UK.

“What we do is we’re obsessive about making sure local teams can pursue their local objectives, can pursue the best in creativty, and then when something rises to the surface we’re extemely good at geting together, talking to creatives and getting things to move around,” he said.

“You cannot centralise Endemol creatively. It’s like trying to get a Frenchman to say something positive about English food! It’s just not possible, it doesn’t work.”

Point four in Hincks’ manifesto: a new relationship with audiences, where production companies and creatives alike go from “leaning back to leaning forward” in how they interact with and market to people.

“Content and ideas are not enough any more, they’re necessary but they’re not sufficient,” he said. “There is a need now to fuse creative and marketing, particularly in the digital space.”

YouTube is a prime example. Hincks reminded his audience that every minute, 90 hours of new content are uploaded onto YouTube. He warned MIPTV attendees to think harder about what this means.

“It is the Wild West, it’s anarchy. So the idea of treating YouTube – as some people tended to do a year ago – as an alternative to a broadcaster is in my opinion not right, or at least not the whole story,” he said.

Hincks thinks production companies shouldn’t be focused on how many YouTube channels they have – although Endemol has more than 100 – but to think harder about how to tie them together as networks.

“It’s not how much you’ve got, it’s what you do with them. It’s tying them together and marketing to the consumers and YouTubers on the different channels. One of the things we’re trying to get access to is the advertising dollar, and to do that you have to have scale.”

Hincks announced plans for Endemol to launch a Fear Factor YouTube channel, initially in the US, hosted by YouTubers with a mixture of archive and new clips of people doing “weird and wonderful things”. It will then launch in Europe, and start to create a network which may be cross-promoted on other Endemol channels, such as Mr Bean.

“Once you start adding these things and tying them together, that’s when you start to have fun,” said Hincks. “We’re in the channel business in the digital/online arena, and that’s a very exciting place for us to be.”

The fifth point was the need to change the risk models around content production, even if the bulk of Endemol’s business remains with traditional broadcasters and familiar distribution models.

Endemol partnered with the Rolling Stones to make a mobile app in 2012, for example, investing its own money in the project. “It’s not often you get to meet a living legend, so Mick was pretty excited when I rocked up!” quipped Hincks, before getting to the more serious matter of the business.

“Hundreds of thousands of people are subscribing to this app,” he said, with 91% of them signing up for push notification messages when new content is added. “This is a very exciting but new venture for us, and we want to do more. We want to back our content in digital, get behind it and take risks.”

The session finished off with a short Q&A segment, moderated by journalist Kate Bulkley. She asked him about the growth in original YouTube channels, including YouTube-only networks like Maker Studios and Fullscreen Media, which have both taken significant investment in recent times.

“Where the online and digital video comes into play – and where we have to think differently and are thinking differently – that is where you have to think multi-territory and as a group,” he said. “We are now working much more closely as a group, particularly in the digital sphere. And it’s essential that you do that.”

So, Endemol remains defiantly un-centralised creatively, but the marketing and digital strategy is coming together more, which has implications for the individual channels being run on YouTube by the group.

“A year or so ago, we were looking at something like Mr Bean… and trying to work out how we harness that. In some ways the answer is much simpler than we thought… You create almost like a hub that people come to, and then Mr Bean can market Fear Factor. You can start to talk to each other, and it starts to create critical mass.”

Hincks finished off by returning to Endemol’s traditional business with the broadcasters, and how the global decentralised nature of the company’s creative work is prospering in 2013.

“Are the traditional places taking risks with formats – the UK and US – becoming more risk-averse? You do see a trend, and we’ve benefitted from this, in the UK of more imported formats,” he said.

“Broadcasters are finding life tough, and taking risks is scary. Actually, I think to be a global company obviously puts you in a very strong position. We can say there’s a format that’s proven here, or works well in Spain or whatever… It’s being able to pick from a menu of shows that maybe don’t have to start in the UK. They can start in Italy, or Spain, or Latin America.”