THE MIPTV SDG Award for 2022 was presented to the Association of Commercial Television and VOD Services in Europe (ACT) at a ceremony held in the Palais De Festival’s Debussy Theatre. An SDG Innovation Award was also accepted by Junk Kouture, a company that encourages young people to create high-fashion clothing from recycled objects and materials.

The MIPTV SDG Award is given by MIP markets and the United Nations to a company that shows leadership in supporting the UN’s 17 Sustainable Development Goals (SDGs). Speaking via a digital link, under secretary-general for global communications at the UN, Melissa Fleming, said ACT was receiving the award for its “role in combatting misinformation and disinformation.”

In Cannes to receive the SDG Award was ACT director general Grégoire Polad, who said the organisation’s members invest a lot of time and effort in making sure their audiences have a trusted, fact-checked source of news and information.

“This award is very timely, given what we are seeing in the world today. I’d like to dedicate the award to the Ukrainian broadcasters that are working so hard to ensure we have accurate news about that conflict.”

Speaking via a link, ACT president Guillaume de Posch added that commitment by television broadcasters was vital given that big-tech platforms have “been slow to act. There is a conflict between their pursuit of profits and their responsibility to provide fact-checked information in the online environment.” 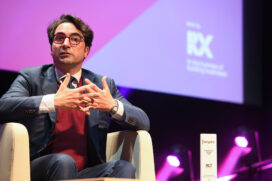 Junk Kouture’s award was collected by the organisation’s founder Troy Armour, who said he wants to build the organisation into “a kind of Olympics for creative kids. When you’re a teenager at school there’s a lot of social capital attached to being good at sport. But if you’re creative and not good at sports then you tend to end up stuck in the corner. Junk Kouture is all about unlocking that creativity — giving kids resilience and transforming them into changemakers.” At the same time, it is “changing the way the youth of today view waste materials”. 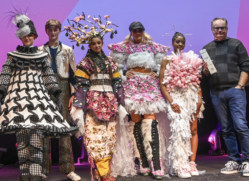 Founded in Ireland, Junk Kouture runs a series of fashion events that showcase work by young designers. It is aiming to have 13 events by the end of 2023. To showcase Junk Kouture’s creativity, five young designers gave a spectacular fashion show on the MIPTV stage — wearing costumes they had created from everything from nuts and bolts to seatbelts and bubble wrap.

‘Please do business with Ukraine’

THE STAND With Ukraine Content Industry event on Tuesday, showcased the breadth and depth of Ukrainian TV talent, plus some eye-witness testimony from a number of representatives of the country’s industry including Media Group Ukraine’s Iryna Cherniak, and 1+1 Media’s Inna Filipova.

“I’ve been working with Ukrainian producers since 2001 and I am so impressed by the quality, originality and the astonishing leaps in technical quality the country has taken in the last 10 years. What I would like to see is that everyone pays attention to their presence here, and please go to their stand and perhaps even license some content,” moderator Tim Crescenti, managing director of Small World International, said.

Cherniak described how everything changed for her and her colleagues, and the country, in just one day:

“The day before the bombs started falling, we were at a launch party for our new production, Big Walk, and since then we have been faced with a new reality, which involves reinforcing and expanding our news broadcasts to foreign countries, and developing a new stand-up show — because humour is a weapon is these dark times.” 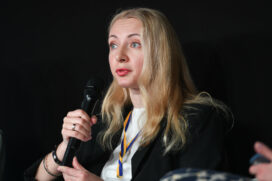 No shortage of good ideas, but they need cash

MIP Workout Kids: Deals No Deals, There Are Many Ways To Cut The Cake, on Tuesday, featured expert dealmakers, there to mentor kids programme makers in the many ways a deal can be constructed. 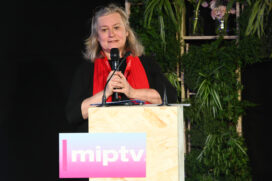 Introducing the event, moderator Sarah Baynes, CEO of The Creative Garden, said that it’s a shortage of money, not of good ideas, that creates delays: “There’s so much great content out there, and loads of good ideas, so at this event we’re dealing with content that is investible. But then how do you actually get people to invest? How can we look at projects differently and help to get them to the point where they attract investment?” 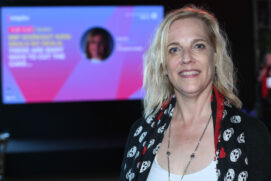 Agnes Augustin founded the non-profit organisation The Shaw Rocket Fund, which works on a social enterprise model, said: “We work as an equity partner and help with finance and funding, especially when a deal needs multiple partners across different countries, or pre-sales to get a project off the ground.”

Dominic Gardiner, CEO of kids distributor Jetpack Distribution, encouraged producers to be innovative and flexible in their search for funding: “There’s never quite enough money to go around all the good ideas, but just by the fact of being here at MIPTV, gives you a head start. And you have to be tenacious, get out there and start conversations with people who might be able to help. And you probably shouldn’t go down the route of approaching platforms and licensing your show or series; I think it’s better to look at co-production opportunities.”

Game show that allows cheating is a winner 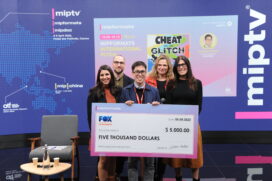 FOR THE latest edition of the MIPFormats International Pitching session, this year held in partnership with Fox Alternative Entertainment, five finalists were picked from 67 entries by 51 companies in 27 countries — a record number of submissions, according to Robert Marking, MIPTV parent company RX Global’s senior vice-president, sales and business development.

The finalists were from The Philippines, Japan, Turkey, Austria and Ukraine, and each had five minutes to convince judges Yasmin Rawji of Fox Entertainment, and Allison Wallach and Nathalie Wogue of Fox Alternative Entertainment: “All the shows we saw had the DNA of what works for Fox,” Wogue said. “We like to be unpredictable and these shows had elements of that.”

“Big networks have to be creative to find the best ideas,” Wallach said. “We cast our net wide and, with the help of Nathalie acting as a filter, we are always looking for the next great format.”

This year’s winner of the $5,000 prize was Christian Gamboa from The Philippines, whose format Cheat On The Glitch is a game show where cheating is positively encouraged, just as long the players don’t get caught in the act by the cameras, which ‘glitch’ during the games giving contestants 10 seconds to do whatever they can to win the games.