MIPTV: What did you miss?

Members of the MIPTV News team sum-up the week in Cannes.
By Julian Newby on April 6, 2022 0 Comments

IN THE final MIPTV session What Did You Miss? session, journalist Andy Fry and editor-in-chief of MIP Publications Julian Newby, discussed the trends that they had observed at the first live version of MIPTV since 2019. The duo’s far-ranging discussion included the continuing content-creation boom, the fierce and enduring competition between the various streaming platforms and the opportunities that creates for independent producers, alongside the emerging creator economy, NFTs and Web3.

They also discussed the popularity of dramatised versions of true-life stories, as well as formats and factual entertainment’s new-found focus on the victims of crime and social experiments such as My New Mystery Job. 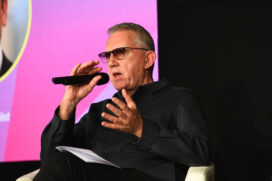 Both speakers expressed their delight at being back at a live event: “The event feels as if it was as much about networking as deal-making, whereas normally it’s much more focused on the deals,” Newby said. “There were lots of lively roundtable sessions, with the subject of content creation remaining a dominant theme. As Guy Bisson of Ampere pointed out in an earlier session, the current high demand for content is not a bubble, it’s a real boom, with studios booked solid for the next two to three years.”

The new joint initiative between MIPTV and CANNESERIES, known as MIPTV x CANNESERIES Connection, is aimed at bringing content creators together to spark the production of quality content, as demand is outstrips supply: “Moritz Polter of Windlight Pictures said during the market that there is a real need for training, which also comes with an opportunity to be more inclusive and to open up the TV industry to a much broader range of talents from non-traditional countries and demographics. We might indeed be at an inflection point where diversity can fill the content gap,” Fry said.

Another new wave of creators is increasingly coming from social media, where there are also emerging opportunities in sourcing ideas and content, as demonstrated by Future Studios and The Lad Bible Group: “There’s an increasing number of short-form videos, usually of four-to-six minutes, that come from successful bloggers and from ideas derived from social-media platforms, that is then transitioning to broadcast TV. What broadcasters care about most is whether a creator has an audience,” Fry said. “But even paper ideas can work — if you’ve got good IP you’re in a good place right now.”

But all of this is happening against a background of the big streaming platforms creating walled gardens around their content: “Every debate about where the industry is going comes back to the streamers, because they’re the ones spending the money. HBO Max has joined in and sees Netflix and Disney+ as its main rivals, but in fact Peacock and Paramount might disagree with that. Whatever your point of view, it’s clear there’s a lot of fluidity in the market and plenty to be resolved, especially in terms of how restrictive walled content gardens are to future development.”

“It might also be a great moment for the indies, because they can sell to any of the streaming platforms. It’s clear that Sony Pictures and Television (SPT) regards its indie status as a superpower, and other super indies like Banijay and new kid on the block Candle Media are also looking well positioned to benefit from their platform-agnostic status,” Newby added, but it wasn’t always the case: “Squid Game was written in 2009 as a film and rejected by everyone. Then Netflix green-lighted a Korea-only version, but made as a series rather than a film, and that eventually became a global phenomenon.”

And then there’s web3.0, the metaverse and NFTs: “The business model around NFTs and the metaverse isn’t clear yet, in much the same way that the business model around YouTube wasn’t clear when it first acquired by Google,” Fry said. “But what is clear is that NFTs as collectibles really work, and what seems to be emerging is they can also act as a gateway to content and to membership of viewer communities.” Newby added: “My guess is that the metaverse will consolidate as a series of inter-connected spaces, but the issue of the transportability of IP across all those spaces is still unresolved.”

In terms of programming trends, dramatised versions of true-life stories such as Netflix’s Inventing Anna and Hulu’s The Dropout, about US entrepreneur Elizabeth Holmes, have marked the start of the year, with Sky recently commissioning Mussolini, WeCrashed, about the collapse of WeWork, and Super Pumped, about Uber founder Travis Kalanick. Shows based on games are also emerging with Halo, God Of War and Twisted Metal all currently in development or production.

Formats are also in transition: “There are several new shows based around hobbies such as Lego Masters, and Race Against The Tide where sand castles have to be built before being hit by incoming waves,” Fry said. “Also, as we saw with Cheat On The Glitch, the winner of this year’s MIPTV Formats Pitch, the idea came from The Philippines. It’s good to see great show ideas coming from countries not usually seen as originators of globally attractive IP.”