Focus on kids, opportunities for women and investment in content.
By Julian Newby on April 6, 2022 0 Comments

SKY STUDIOS CEO Cecile Frot-Coutaz used her keynote session at MIPTV to reveal that the European-based company is working on a scripted series about Italian dictator Benito Mussolini. She said the new series about the rise of fascism in 1920s-1940s would land in 2024 and was “timely and globally relevant”. 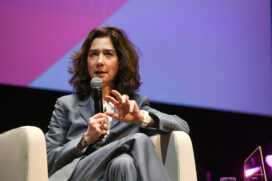 Sky Studios is part of a complex network of media brands that sits within the Comcast global family. She said: “Our mission is to supply high-quality originals to Sky’s 23 million customers across markets like the UK, Germany and Italy. We are the doorway for talent that wants to produce content for the Sky audience.”

She said it is a great time for new creative talent to make its mark.

“A few years ago, we used to say that all of the major projects went to the same writing and showrunner talent. But demand is now so strong it is an opportunity for young creatives to accelerate their careers.”

Frot-Coutaz used the session to discuss some of the key turning points in her career which has involved time at Pearson, Fremantle and YouTube. Explaining why she was tempted to joined Sky Studios, she told delegates: “I had some experience of working with Sky and NBC (part of Comcast), so I knew they were a brave and ambitious company. I also liked the fact that Sky is a platform, technology and content company. And I saw it as an incredible opportunity to continue to invest in originals, as I had done at Fremantle.”

During the session, Frot-Coutaz was presented with Variety’s International Achievement in TV Award.

THE WOMEN Mentoring Session on Wednesday morning was opened by consultant Laura Lemens Boy on behalf of MediaClub’Elles president Florence Sandis and MIPTV’s Lucy Smith. “Welcome to the seventh international mentoring and networking breakfast. This year I am honoured to welcome eight exceptional mentors from around the world who have accepted our invitation to share their insight and experience, tips and suggestions to help you to succeed in business.” 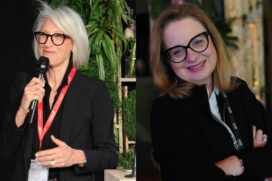 Lind said that women need to be more self-confident about their professionalism: “Generally, women will look more at the real-life implications of a job, because the work/happiness balance is a high priority. But that’s a difficult issue to talk about in the TV industry, because a lot of people involved work long hours, especially the executives, producers, crews, actors and directors, but they are happy doing so because it’s artistically and/or professionally fulfilling. And careers are not always about going upwards, going sideways into different roles can also be a wise move.”

THE FRESH TV: Kids session, presented by The Wit CEO Virginia Mouseler, showcased innovative kids’ shows from the UK, the US, Canada, Denmark, Norway and Brazil: “We aim to inspire TV producers by finding the very best shows from the 90 countries that The Wit monitors,” Mouseler said. “In the case of kids’ programming, the shows tend to be about who they’ll become in the future, how to find themselves, and shows that reflect kids’ dreams.” 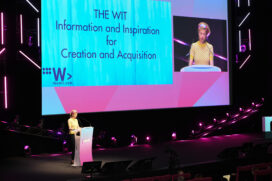 The first series highlighted was Take Note from the US — currently broadcasting on Peacock — about a group of contestants in a fictional talent show. UK show Little Darlings features Destiny, the child of a famous musician meeting her father and step-sister for the first time, while Barbada and Be Yourself from Canada feature drag-queen hosts. Both shows are about acceptance and aim to help kids find themselves as they grow to adulthood.

Brazilian show 7 Chances To is about Nina, a child who is scared of everything and who runs away from challenges, but who is then inspired by her grandmother’s diary which encourages her to be braver and to give every challenge seven tries before she gives up.

Two shows that feature kids tackling challenges from Scandinavia are The Hunt from Norway and Kids Gone Wild from Denmark. In both cases children are faced with challenges that need to be approached collectively; and in the case of Kids Gone Wild, a group of 10- to 14-year-olds are left on an island for one week and have to fend for themselves — a true social experiment, as the kids have no teachers or parents to guide them, no mobile phones and only basic survival tools to help them build shelters and find food.