On writing characters you care about, and her latest secret project
By Angela Natividad on October 20, 2016 0 Comments

Extra, extra! Shonda Rhimes, creator and writer of compulsively livetweetable hit shows, and one of the most influential producers in Hollywood, has been named MIPCOM 2016 Personality of the Year. In an interview with group editorial director Anna Carugati-Guise of Worldscreen, she shared insights on her shows, how she writes, and her newest, still-unnamed project, which she and her team affectionately call “Romeo and Juliet are Dead.”

To kick things off, it’s best to start with Rhimes’ definition of a “showrunner”—because a showrunner in American TV has a significance that doesn’t quite exist anywhere else, and understanding that provides scope on her achievements.

The showrunner safeguards and defines the creative vision of a show, running both the writers room and production. “You’re in charge of what happens on set and what happens in the room,” said Rhimes. That responsibility extends to budget, and “keeping actors happy, healthy and taken care of, keeping the stories happening, and the trains running on time.”

Like many writers, Rhimes has been inventing stories since the dawn of her life. “I had big plans to be Toni Morrison. But Toni already had that job, so you can’t get that job.”

When she first broke into Hollywood, she found herself writing “teen girl movies”—like Crossroads, or Princess Diaries 2. “There wasn’t a lot of character development going on,” she said, but adopting her first child changed everything: “I was home a lot. And there was a lot of television to watch.”

TV fans will find vindication in this lynchpin moment. “I watched an entire season of 24 in 24 hours,” she said, plus three seasons of Buffy in about as many days. “I thought, wow, this is where all the character development’s happening!”

That seed cracked and blossomed. She told her agent she wanted to do TV, and he sent her to Touchstone (now ABC). They decided to give her a go. “The first year, I wrote a pilot about war correspondents,” said Rhimes. “It was a really great experience. But it didn’t get made because it was about war correspondents having fun, getting laid and drinking—while covering war. And we were in the middle of a war.”

So she made her life easier: “What does Bob Iger want to see?” It turns out Iger wanted a medical show.

“So I wrote a medical show about people who were very competitive and had a lot of sex, and who enjoyed doing all these things while doing surgery.”

You probably know that show. It’s Grey’s Anatomy. Now in its 13th season, season 12 was the third-highest-rating network drama for the 18-49-year-old demographic.

“You go from writing movies, where you’re at home in pyjamas by yourself, typing one script a year … to suddenly having to churn out a script every 8-9 days, and having 300 people working for you,” Rhimes said. “You have to run a writers room and know what you’re doing. It was 0-3000 in an instant.”

So how does Grey’s stay surgically-fresh? Rhimes imagines it as a novel she’s been writing for the last 13 years, one that’s bound her to actress Ellen Pompeo.

“I always try to think of the fact that Meredith Grey has been on a journey,” said Rhimes, who believes in beginning each season with a new story to tell. “It’s not the same show every year. Though there’s a procedural element every week, it’s a character journey.” Evolution is driven by the question, “Where is Meredith now? How do we make that story feel interesting?”

While Rhimes produces the words, Pompeo gives them life. “She’s fearless,” said Rhimes. Pompeo has appeared without makeup and alongside flashbacks from 12 years ago; she literally ages onscreen. “We get to watch somebody evolve on camera.”

That symbiotic relationship is important, because every character Rhimes writes matters to her—yes, even Eli “Rowan” Pope (“He’s just a dad trying to take care of his kid!”): “If you’re telling stories, all your characters should matter,” she said. “If they don’t, you shouldn’t be telling stories about them.”

It’s also a reflection of Rhimes’ character creation approach, with is collaborative with the actor. “Until an actor’s been cast, that character doesn’t have life breathed into it,” said Rhimes.

As in any successful collaboration, there are rules: Rhimes tells actors, “You will say all the words as they are written. We will not discuss the text. But I’m not going to tell you how to say or interpret them. What I love is that you get these performances back that inform whatever is going to happen next.”

To wit: Dr. Miranda Bailey—another character in Grey’s—was first imagined as short, blonde, blue-eyed and sweet-faced. “She was the only person in the script for which there was a physical description written.” Then Chondra Wilson was cast: 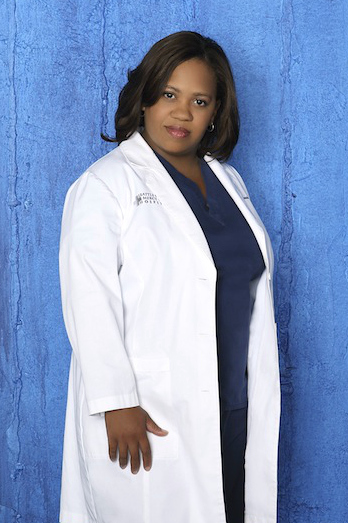 “Dr. Bailey became a short, adorable black woman with a very different attitude,” said Rhimes. “She wasn’t sweet and cuddly; she was a no-nonsense, hardworking woman. Wilson’s interpretation made it different, and that became Dr. Bailey for me completely without question.”

Then there’s the intense, angry and corrupt Cyrus Beene of Scandal, played by Jeff Perry. “There was something about his explanation of why he would never be President, his rage and the way he played it, that said to me, he has a husband he’s been protecting. I ran to the writers room and said ‘CYRUS BEENE IS GAY!’ … His anger, his secrets, his destructive powerful nature play out against the backdrop of a wonderful man who’s waiting for him to be better than he could ever be,” Rhimes observed.

After Grey’s came a short-lived spinoff, Private Practice, which drove Carugati-Guise to quip that, by now, Rhimes must know a lot about the medical industry.

“If anyone here wants to give birth, I can perform a C-section. I’m sure of it. If you need an appendectomy, I can do that,” Rhimes laughed. “Just don’t fall and hit your head.” She added, “I am probably very dangerous because I know just enough to be scary, but not enough to save anybody’s life.”

What interests her about the medical profession is that life-and-death extremes are brought to harsh relief. “On a bad day, you kill someone. On a good day, you save someone’s life. When you have a creative thought, you are changing the way someone lives, dies, breathes or moves. There’s something visceral about that job that I loved.”

After that came Scandal, which struck a cheer among avid fans in the room. Though disinclined to start yet another show, producer Betsy Beers nonetheless convinced Rhimes to meet Washington D.C. “fixer” Judy Smith. Rhimes decided to give her 15 minutes.

“She’d done everything, from representing Monica Lewinsky to getting Clarence Thomas through hearings,” Rhimes said. Four hours through the conversation, she felt hungry. “I realised there was a show in there. Hundreds of episodes. And I was stuck. There were all these stories in my head.”

In Scandal, many storylines are inspired by things that have happened, from sex scandals to murders. But there are also things that seem to happen on the show well before they occur in reality.

“A lot of times we write things that end up being disturbingly real,” said Rhimes, who pointed to Thorngate, a storyline in which phones and computers can eavesdrop on you for unfriendly ears. “We made all this stuff up, thought it was funny and awesome, then we found out it was real!” she exclaimed.

“By the time we got to Hollis Doyle, the outspoken, crazy Republican guy running for President who said appalling things…” Rhimes drifted off and gave the audience a significant look, sparking laughter, then shook her head. “I don’t know. I really don’t know what happened.”

Another cool aspect of Scandal is the livetweeting around it. Series don’t typically get a lot of livetweets, because people worry about missing plot points, but Scandal is unique in both this quality, and the fact that its cast seems really Twitter-savvy.

The initiative was proposed by actress Kerry Washington, who, with Rhimes, was an adept. “We got everybody on Twitter. I was already livetweeting things, so we got everybody livetweeting,” said Rhimes. “It wasn’t just the cast. The crew, the directors, then other writers” jumped aboard, followed by her researcher. “Then fans and journalists were livetweeting. After awhile, it felt like this lovely community online, all doing it together.”

What started out as a cute idea evolved in unexpected ways—not unlike Rhimes’ own storylines. “Ratings were okay the first season, then, the second season, Oprah started livetweeting with us. And that changed everything.”

After Scandal was up and running, Rhimes went on to executive produce How to Get Away with Murder and, most recently, The Catch, whose season 2 trailer appears below.

“My job is just … dragon in a cage,” Rhimes said. This stems from how, when working on Grey’s Anatomy, Rhimes called producer Mark Gordon her dragon “because he was the most powerful person on our show.” Today, she’s the dragon—the force head writers can invoke when they need firepower to talk with the studio or network, or for hashing out creative issues.

“Generally they know what they’re doing,” Rhimes said of Peter Nowalk, the creator of How to Get Away with Murder, and Allen Heinberg, who conceived The Catch. “They pitch me their seasons, we talk to make sure I’m on board, but there hasn’t been a time I haven’t been. We’re doing really well in that sense.”

Amidst all this, Rhimes wrote a book, Year of Yes, published in 2015. It was initially meant to be about motherhood, but over a year, Rhimes realised she didn’t want to write about that. “I’d been doing this weird ‘year of yes’ thing, where I was trying to make my life less workaholic-like … and that became the book,” she said.

“In writing about doing it, it made it even better. I was able to examine why I was doing it, and why I had been such a workaholic. That helped make the change.”

Asked whether writing is still her biggest priority, Rhimes admitted living through a point when it was dreadful. “But I really enjoy the writing process now,” she said—simply because she’s had to write so much that there wasn’t time to think about not wanting to do it. Now, “I enjoy getting to sit in the hospital, being Meredith or Liv or Fitz for awhile. It’s fun.”

She also says all the dialogue out loud—with feeling!—while writing. “It’s embarrassing,” Rhimes laughed. “Betsy makes fun of me.”

Given her love of it, she’s learnt to delegate within her vast empire. “My job as manager and leader is to find ways to make it possible to have other people do those other things, so I can focus on storytelling most of the time.”

As a perhaps inevitable result, Rhimes isn’t picky about finding the perfect “space” for writing. “I can write anywhere,” she said. “I’ve trained myself that way. When you have small children, travel, and so many shows, you have to figure out how to write anywhere. My Pavlovian reflex is, as long as I have headphones in my head and music in my ears, I can write.”

It’s been an interesting journey. “It’s going from thinking about just yourself to thinking about several thousand people,” said Rhimes. “You become responsible to your partners, and for all the people who work for you.”

What she’s working on now is, well, trying to make people feel valued at work. “If work isn’t fun, maybe we’re doing it wrong. It is a creative endeavour, and it should be for everyone doing it.”

And of course, there’s also Shondaland’s upcoming untitled project. Created by longtime Shondaland writer Heather Mitchell, Rhimes said the show is a sequel to Romeo and Juliet: Once the famously star-crossed pair are dead, what happens to the Montagues and the Capulets? How do they cope? Who takes the throne in Verona, and how is Verona affected?