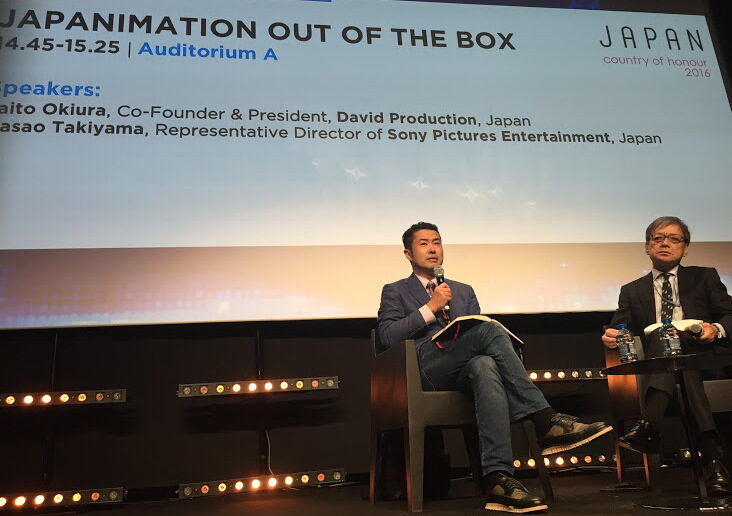 MIPCOM Report: Japanimation Out of the Box

The changing business of Japanese animation, and shows to look forward to
By Angela Natividad on October 18, 2016 0 Comments

Today’s Japanimation Out of the Box gave an insightful a survey of the future of anime. This session included co-founder/president Taito Okiura of David Production (left) and Masao Takiyama, representative director at Sony Pictures Entertainment, who leads the three major cable animation networks in the country. Acquisitions of his that you may recognise include Metropolis, Cowboy Bebop and Paprika.

Before we dive into the films, here are some goodies from the Q&A. Japan’s anime market size is worth about US$17.6 billion. But it may be impacted by two things, which our speakers addressed here: Japan’s ageing population, and the rising dominance of online distribution, which doesn’t share its viewership figures.

For the first time in 2015, the duration of the late-night timeslot exceeded primetime and daytime slots—partly because of the ageing population, Okiura suspects.

“I believe animation is primarily for children,” said Okiura. “Will we see less kids shows from Japan?”

Takiyama believes it’s important to produce content that speaks to a broad population and responds to shifts in majority interest. In the past, he said, late-night titles had low visibility and were considered niche market content. This may change.

“We have to see what is the demand, the subject to be accepted by the audience,” he said. But the key to solving this problem may, in fact, be online distribution.

“Our target is the broad audience—two generations. Papa, mama, the kids,” said Takiyama. “Family-targeted animation has a long life. It’s not easy to break into this market.”

But the overseas market presents new opportunities. In the past, it was tricky to sell overseas—few people were equipped to do it, and there were agent costs and time fees. “It was a risky, limited opportunity. But now, thanks to the internet, even if it’s a niche, on a worldwide basis there’s a huge market for us.”

But online distribution has its downsides, too. Video platforms have unique audience access data, and their refusal to disclose it is frustrating for independent producers, Okiura observed. “In a traditional broadcast cable world, there’s the traditional ratings systems, which are mostly publicly available to industry insiders.” For him, big data is “the most valuable information that’s not available.”

“It’s a problem for us,” Takiyama agreed. “They don’t even disclose the number of subscribers by country. We miss an opportunity to create titles adapted for the international market.”

“We struggled with having feature length films. But this summer we have a big hit feature: Your Name, directed by Makoto Shinkai, with 15.4bn yen in box office revenue,” said Okiura. This makes Your Name the fifth biggest box office revenue-maker in history (the top slot is held by Miyazaki’s Ponyo, with 15.5bn yen, or close to $150m).

“We see so many mainstream audiences coming back to Japanese animation. And many Japanese live action producers are saying ‘hey, I can do this, I’m good at storytelling. So maybe I can hire an animation studio and make a mainstream, live action, feature length film’,” said Okiuda. “I think this will rejuvenate our domestic market.”

Takiyama agreed, and observed that Shinkai may prove what he believes about late-night, teen and young-adult content going more mainstream. “Shinkai’s titles were originally for the niche audience; in the case of Your Name, Shinkai wanted to produce for a broad audience,” he said. “It’s important for us to expand our business, to learn about the international marketplace and expand targets—not only for kids and teenagers, but for adults too.”

Your Name isn’t yet available internationally, but Okiura has heard good reviews from professionals. “Hopefully this will expand the international marketplace for Japanese animation,” he said.

Onto the cool animations!

This series, for teen boys, is based on a manga with a 29-year history … and still going! “It’s a multi-generation fanbase,” Okiura said.

Season 1 is running in the US market on Cartoon Network’s Adult Swim. (Appropriately late-night.)

Kabaneri of The Iron Fortress, also for teens, is produced by FUJI TV, which just struck a deal with Amazon Prime. Soon, all episodes will be available globally:

Ace Attorney is based on a 15-year-old Capcom video game. It has 24 episodes and is available in 8 territories, including North America, South America, Europe, and the Middle East.

Space Brothers, based on a manga, is in 6 territories. It has 99 episodes.

Inuyasha is a family show that used to appear on primetime. At 193 episodes, and based on a manga by Rumiko Takahashi (I’m looking at you, Ranma 1/2 fans!), it is available in 5 territories.

Lastly, Brynhildr in the Darkness is a teen show, also based on a manga. At 13 episodes, it is currently broadcast in 9 territories, including North America, South America, the UK and South Africa.