Harlan Coben has sold more than 60 million books worldwide, several of which have been developed into successful films and TV shows. Now he’s written an original story for a 10-part TV series called The Five, which he also executive produced. This morning, Coben talked more about the project and his experiences of the TV industry in a MIPTV keynote, interviewed on-stage by Pierre Langlais from Télérama.

Coben’s books make plenty of references to popular TV shows, indicating his interest in the genre. “Any writer my age grew up watching TV,” he said. “I was as much influenced by the old Batman TV show.. the shows I grew up with, as I was from books and storytelling. All writers are, even if they don’t want to admit it!… It’s just storytelling.”

His books are full of dialogue, which helped in the transition to television, said Coben. “Dialogue has to serve more than one purpose in a book, and I think it’s the same for a TV show. It’s advancing the plot, but for me it’s also telling you more about the character. It has to create mood, develop the character and it has to move the plot along,” he said, before turning to a familiar theme from MIPTV keynotes. “I do think we are in a golden age of television, there’s no question,” said Coben, describing The Five as “almost a novel that’s on television: it’s ten chapters long, you have a real beginning and a real ending… if we sell a Season Two, I don’t want to sell it just because we gave you a cliffhanger.”

Coben talked about the power of fandom: people who love his books may be the base for viewers of his new TV show. “The whole fan thing is really kinda interesting. As a writer, the one thing that writers say that really annoy me – well, they say a lot of things that annoy me, but this is the most annoying one – is ‘I write only for myself. I don’t care if anyone reads it’. That’s like saying ‘I talk to myself, I don’t care if anyone listens’… You need the reader. No one here would want to make a TV series that isn’t seen by people. None of us are really in it for the money. We want people to see it. So I’ve always chased readers’ hearts, or viewers hearts. I want this show to move you.”

Coben said that this doesn’t mean he is entirely led by his fans’ demands. “When we write by committee, we’re not as good… my job as a writer and creator is to take my fan where they don’t necessarily know they want to go.” He added that this applies to not trying to be too “everyman” in the settings and characters in his work, to angle for the biggest, most global audience possible. “The more specific you are, the more universal the appeal.”

Coben has had two French adaptations of his novels, and now a British series in The Five. “If you’re going to collaborate, first of all you might as well collaborate with the best,” he said. “I’m not going to be another one who complains about Hollywood, but it was harder for me to present the vision that I wanted to do there.” Coben said he does follow criticism of his work, but advised fellow creators that reading reviews can be a painful process. “It’s like reading the comments section below a news story. You don’t really wanna do it!” he said. “You don’t really wanna read your reviews.”

He added that he tried with all these shows to be as hands-off as possible “but I just can’t do it” – every day he’d be sent the rushes, and would “study them like a Rabbinical student with the Talmud… I have no other way of working other than being completely obsessed with every detail!” But Coben stressed that he worries about the content, rather than which network is going to air it, or other business issues.

Coben talked about the biggest difference between writing novels and TV: the idea of collaborating. “With my novels, I know the beginning and I know the end. I know very little in between,” he said. But the team on The Five had the job of helping Coben to shape that journey, with scriptwriters. Does he feel he is learning enough about TV writing to one day write a show entirely himself? “I’m learning how to write novels still! A part of being a writer is you’re immensely insecure, and you always think you suck. And every day, that brings me back… I think that if one day you lose that doubt, that’s when you start phoning it in. Only bad writers think they’re good… You have to have that angst to want to make your stuff better.”

Coben ended on a positive note about his experience of the TV world. “How f*cking lucky are we? We get to make TV for a living! We’re not making cardboard boxes for a living… I don’t care how long you’ve been doing this, that’s just so frigging cool!” 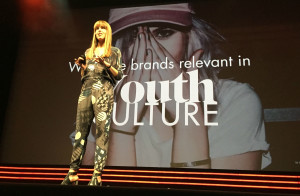 Earlier, Margaret Czeisler, chief strategy officer of Wildness, filled the MIPTV audience in on how today’s young people are helping to reshape how we define ‘celebrity’ and why cultivating communities of “mega-fans” is ever more important for the television industry.

Wildness is the division of multi-channel network AwesomenessTV that draws together research on “Gen-Z” in order to help brands understand changing youth media habits. “What’s different about this generation is that they don’t simply consume culture. They make it, and they create it… We named this generation ‘the culture creators’.” And they account for 35% of the world’s population: “They are catalysts of the cultural revolution that we are all experiencing… This generation is creating and sharing on a weekly basis more than the entire US adult population has ever created.”

One in five young people are writing and sharing and publishing original poetry on a weekly basis. “How many of you wrote poetry on a weekly basis for fun… and then published it to the world?” she asked the MIPTV audience. “Not many. I don’t see anyone… With the shortest attention spans of history of any generation, poetry packs an enormous amount of meaning into 140 characters, right? So the challenge for us is to create new formats and new content that is as powerful as poetry.”

Czeisler said that this generation values authenticity and uniqueness in their cultural currency, while recognising that failure is part of their journey. “They’re a generation of curious explorers and seekers. 91% told us that when they fail, they seek a new adventure until they find and discover what they’re both passionate about, and what they’re good at.” She added that they’re the most inclusive generation in history. “Not only do they embrace differences; they actually revel in them.”

50% have never had cable, or plan to cut these cords. 70% prefer streaming services – and according to Czeisler, this generation would rather subscribe to video-streaming services rather than put up with ads. That said: “Nine in 10 watch YouTube daily. They’ve grown up with influencers who they see on Snapchat, YouTube, Vine, Instagram the like… Why do we think YouTube is important? Because they don’t just sit back and watch culture, remember. They make it.”

“Digital brought the dissolution of boundaries and borders, allowing fans to congregate in more numbers, and amplify their voice,” added Czeisler, noting that user-generated books service Wattpad’s largest category is fan-fiction, accumulating 8.6bn reads of this category in the last month alone. Meanwhile, 81% of the people surveyed by Wildness said they had formed real friendships through fandoms.

What are these young people doing with their social networks? 91% say they are building their favourite celebrities’ brands by sharing with their friends.  “This generation is really calling every one of us to open up and be a more human person. To embrace our failures and our faults. To be honest. To join them, invite them in and recognise them as collaborators. Whether you ask them to remix your brand or just solicit feedback… they seek out companies that listen and help guide them. They seek out companies that recognise them as collaborators and embrace the change they seek. If you listen, they’ll help you build a better product or experience. But if you don’t, they’ll build their own products… and not only will they be successful, they will surpass you.”