Two broadcasting heavy-hitters appeared on the Grand Auditorium stage today at MIPTV, delivering their views on how the television world is changing. First up was Guillaume de Posch, co-chief executive officer of RTL Group, who gave a solo speech before being interviewed on-stage by Marcel Fenez, senior advisor from PwC.

He rebranded TV as “total video” because “TV programming needs to be distributed over all platforms”, noting that there are predicted to be 900m 4G-enabled smartphones in 2017. “TV isn’t any more only in the living room… wherever you are, it basically accompanies you.”

He added that television companies are facing a battle for attention across all these devices, in a new world where young people are watching new stars in short-form videos. De Posch said that the definition of a “hit” is changing in this new world. There’s a reduction in the maximum number of viewers a show can reach on traditional TV. “In the next few years you will have a new normal in what we call a hit… hits are still possible, but they will be smaller in size as a direct consequence of the fragmentation of devices. It does not mean that they will not be strong or that they will not be travelling worldwide… but you will need to have global scale to make sure that the hits you produce as a producer or a broadcaster travel globally.”

RTL saw this new world of digital video emerging, and invested in US multi-channel network BroadbandTV, which is now ranked as the biggest MCN worldwide, ahead of rivals Maker Studios and Fullscreen. “This is something that puts us on the map in terms of short-form video distribution,” said de Posch. RTL has also invested in another MCN: the fashion and beauty-focused StyleHaul. In January alone, RTL’s online investments generated more than 11bn monthly views, he added.

De Posch admitted that technology has presented a difficulty for RTL: “Selling advertising online in an automated manner as it happens now in programmatic is something we were not familiar with,” he said. Again, RTL chose to invest in a company that understood this new area: a firm called SpotX. He also talked about a “pyramid” effect with three tiers of programming: premium, long-form television at the top of the pyramid, which is more costly to produce; then a second tier of long-tail mid-tier content – cable channels; and then a low-tier content layer of short-form video. “There, the volumes of inventory available to actually sell to advertisers online is absolutely massive. And the more content that is put on there, the lower the prices are,” said Posch.

Digital is currently a €500m business for RTL Group, accounting for 8.4% of its overall revenues in 2015. However, Posch is sure that this percentage will increase over time, with RTL building its business around three “key pillars” now – broadcast, content and digital. “You see a lot of links, a lot of interactions between these three blocks,” he stressed. “All this is about video. We believe that our core business is producing, aggregating, distributing, monetising video. We are not doing any commerce, we are not doing any other stuff. We are just focused at RTL Group on the core business, which is video.”

RTL is breaking out of its traditional national boundaries as it tries to capitalise on all this. “We’ve got about 1,000 young, savvy digital executives in the US helping us out with our digital endeavours,” said Posch, who ended on a political note: calling for care to be taken over the drafting of the European Union’s Television Without Frontiers directive. The danger: “We will be super-regulated, while all the newcomers will flow out of the US to the rest of the world with zero regulation… We need to be sure that the EU understands this.”

Posch was clear that great programming remains the core to RTL’s business, while it is focusing hard on scale and globalisation. Where does he wish RTL Group had more skills? The most difficult skills for us to acquire are… how do you make sure you monetise along the value chain? All these new platforms popping in trying to intermediate online advertising. This is a skill that is very hard to develop in-house, so you have to acquire.” 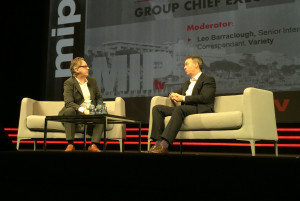 Darroch started by talking about Sky’s origins as “a challenger” trying to innovate in the broadcast market. “It’s a restless business. In our heart we have a challenger mindset,” he said. Sky’s key pillars: content, innovation and “a brand and service that customers can trust”. In recent years, the company has brought its different satellites in Europe together. “It was really about capabilities. We are in a world that’s changing dramatically in terms of what we do. Bringing al the Skys together, and the best of the Skys together, gives us more capability across the organisation to seize the opportunities that are ahead of us.”

Sky first got in to streaming and over-the-top (OTT) distribution as far back as 2005, which Darroch said had taught it a lot about the infrastructure required for these new business segments. Just over two years ago, Sky took a fuller step into OTT through a second brand, Now TV, which is “more of a pay-as-you-go service” where viewers can assemble their own bundles, including daily and weekend sports passes for an element of Sky’s service that has traditionally not been sold in that way.

“Now TV has grown in a very complementary way to Sky,” he said. Likewise at the top end of Sky’s business, it had customers it wanted to super-serve, so it launched its Sky Q service. “You now see a business with a broad range of platforms. I now think we’ve got three of the best platforms, and that can really allow us to get to more and more people over time.”

Darroch talked about Sky Atlantic and its creative strategy. “We could see this opportunity to move more into high-end dramas that we thought was going to roll out not just in our market but in multiple markets. And we felt there was an opportunity and a gap at the time in the UK for a new channel,” he said. “It allowed us to also start to build Sky’s own productions… We’ve created one of the best channels anywhere for high-quality drama that I can see anywhere in the world.”

Sky too has been making investments in technology companies in recent years. “If content is the tennis ball, technology is the top spin that we get to make it bounce a bit higher,” said Darroch, referring to Sky’s exploration of technology in Silicon Valley and elsewhere, as it scouts potential partnerships and future-proofs its business. “If you take something like over-the-top distribution for example, we’ve understood very clearly the things you need to have if you’re going to deliver a robust service… and we’ve got to a point now where our over-the-top service is almost reliable as our satellite service.”

All that remained was for Darroch to be presented his award by Barraclough and Reed Midem’s Jerome Delhaye: