Topics of culture and commerce went back-to-back in the MIPTV’s Agora room this morning, with a session on financing drama followed by an exploration of whether web series will become ‘the new Nouvelle Vague’.

“It’s no secret: financing drama has become an increasingly competitive business, and budgets are skyrocketing,” said Edmunds as an introduction. Guilbart and Thomson-Glover talked about their work with production companies, helping them to raise funding through carefully-chosen broadcaster partnerships, as well as other sources of income.

“When a production company comes to us, we sort of act as their international packaging / pre-sale, ‘overseeing where production could be’ person, almost within their company,” he said. In the case of The Frankenstein Chronicles, the project had Sean Bean attached and a Game of Thrones producer, but was struggling for financing. But it ended up with ITV on board as well as Endemol Shine for rights distribution. “We helped put that together, but we also do like getting involved in where a project is filmed. We work very closely with the writer/director, the producers, to say ‘have you thought about getting it filmed in this place?‘” Which can bring financial benefits in terms of tax structures.

Wild Bunch’s Baraton talked about that company’s move from film to TV, with projects including Four Seasons in Havana and Medici. “The transition between cinema and TV for Wild Bunch was not really a big change or a big transition. It was quite an organic evolution of the company,” she said. “It’s true that the landscape today: the creativity in TV is very alive and much more than it was 15 years ago, I would say… The networks of film and TV financing and producing and creating is not the same exactly, of course, but it’s more and more the same address book, basically.”

One of the big trends in drama – the commissioning efforts of SVOD platforms like Netflix and Amazon – came up for discussion. It is not just the giants in that space who have their cheque books at the ready for high-quality drama. Guilbart talked about a new project for an SVOD platform that she is working with.

“It’s a quite ambitious show which has been financed with one SVOD platform, which is not one of the global ones. What is interesting is that it is a local one: one of the local competitors to Netflix somewhere. We see those people becoming real commissioners with real money,” she said. “The deal is done and it’s very simple… Complication is starting when you have more than one broadcaster around the table.”

Thomson-Glover said that the best thing about one of the global SVOD platforms like Netflix and Amazon coming in is that “they just write a cheque and you make it”, but warned that this comes with some strings attached. “The difficulty with that is they are very generous in their fee structure, but there is very little back-end… It does have its negatives in terms of future revenue and things like that. Whatever you do, the key thing is that relationship with the writer, even if you have six or seven partners, as long as you’re wrapped around that creative vision.”

Another hot topic in the session was consolidation among production companies, and whether the rise of the super-indies is a challenge for drama production. “It’s still very challenging to keep the best conditions for creativity in large companies such as Endemol Shine,” said Guilbart. Thomson-Glover, whose other company Artists Studio is part of that very company, accepted her general point but defended Endemol Shine.

“It is different because it is an independent studio… However, we’re quite lucky because we are being encouraged within the group to find out different ways of attracting talent. And they are very happy to look at different models… They’re very hands-off. Although owned by Endemol Shine, we are allowed and able to talk to anybody,” he said.

Guilbart flew the flag for independents as the session drew to a close. “The more big companies are merging with other big companies and taking over more and more production companies, I have a strong conviction that we need to keep independent producers alive,” she said. “That’s the reason we created our company: to work for them… It’s an alternative. There are big companies, it’s fine. But it’s also very important to keep other ways.”

The following session focused on the creativity aspect, noting that series made for the web are growing quickly in terms of their production values, but also their willingness to experiment with the dramatic form. 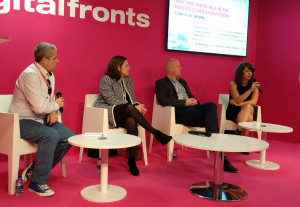 Toles began with a dig at Vimeo’s main rival. “We’re a creator-first platform: where YouTube is cats on pianos, we’re more bespoke. I like to say we’re the Bloomingdales to YouTube’s Wal-Mart,” said Toles, before the conversation turned to the ‘Nouvelle Vague’.

“If Nouvelle Vague is what happened in France in the sixties, they went out of the studios to shoot in the streets in profile… If this is some of the definition, yeah, web series are produced in another way, in a quicker way… this is a new narrative approach, a daring one. Sometimes guerilla shooting… It touches comedy, drama and documentaries as well,” said Santa Maria.

Grace agreed on the faster shooting. “But also I think how the audience is discovering the content and consuming it is very different from traditional television. A lot of it is based on your social feed, and how algorithmic programming is affecting your content… that changes how you produce and market and get your content discovered. Understanding how those algorithms work and enable your content to be surfaced. That changes the stories that you tell.”

Toles said the thing he’s most interested in is that: “Traditionally, content is produced here by a creator, and then the IP is given over to a distribution outlet, whether that’s a channel, a distributor: some middle party – who then transmits it to the audience. What I think is most interesting about digital is that those three worlds combine: the creator, the audience and the platform merge.”

The panel discussed demographics: are web-based fiction series just for teenagers? “YouTube, by nature of their gigantic scale, they’re naturally gen-pop – that 13-14 year-old female demographic,” added Toles. “For us, our platform actually skews a little bit older. I think the average age is somewhere around 33, and is more heavily male… the web is a place that touches every single person in the world at this point, so to say it’s defined by a fairly narrow, young niche I think is incorrect.”

Santa Maria said that “the big audience for traditional broadcast content are older than 50 years old, at least in France… but I think our job is to make them curious about the new narratives, and their taste for fiction in general. And it will evolve in that sense.”

The conversation turned to commerce, and branded content. “If you’re making content for advertisers, there is no freedom. If you’re selling Tide soap or Crest toothpaste or Coca-Cola, you’ve got to conform to the norms those brands are putting on you, and the brands are less progressive in many ways than they are in the linear world,” said Toles, pitching Vimeo’s ad-free platform as an alternative.

“I actually think you have more freedom on Vimeo than you do on YouTube.. because YouTube is the Wal-Mart of online video, and you’re going to have the customers, and an intense flagging system [for reporting content to YouTube for being inappropriate]. Most of the world is more conservative than people who want to create content like this,” said Grace. “Your audience online are going to tell you when they think you suck, very loudly, with lots of feeling, over and over again. And you’re going to have to learn to ignore 60% of it, and listen to the 40% that matters.”

Toles talked about whether the traditional TV industry understands this new world. “Is television relevant in the era of web series? They say ‘we’re going online’ and they have this reality show and extra footage, and they’re saying tune in for the stuff that wasn’t good enough to put on television,” he said. “It doesn’t feel natural and native… People trying to put stuff on the web because they’ve been told to is not the same as this new paradigm which is emerging.”

Grace talked about “ever-decreasing ratings” on traditional TV, particularly among younger demographics. “If you observe what Jimmy Fallon is doing, he’s fundamentally changing the format of late-night television to serve the internet. They’re changing TV because no one watches it live on-air… And you’re watching other people doing this, and the talk-show format is the one you’re most easily able to do this, but you’re going to see it cross into other genres.”

Toles agreed. “It’s about telling a short-form story that can be consumed on a mobile device, consumed in a society that is ever-increasingly pressured by time constraints,” he said. “More and more you’re seeing the deconstruction of the 22 [minute]and the other television-style formats.” Santa Maria said that “creators are the bosses” when it comes to the length of their videos. “Creators know how to handle the length of their own stories… everybody’s ready to have an unbalanced format story.” Grace added that Netflix, Hulu and other SVOD providers are also showing themselves willing to look beyond traditional TV-show lengths. “Which in a world where you binge-view, is fine.” She also brandished her smartphone. “This is not the second screen: this is the only screen… People are going to consume the length they want to consume.”

What could go wrong with web series? Are there obstacles to their growth? Toles: “The biggest challenge is monetisation. The ad monetisation and the nature of pre-roll is rapidly coming to an end… it becomes less and less effective, in the same way that advertising itself in television is becoming less and less effective,” he said. “Ultimately ad revenue has built this entire business over a span of 50 years, and it’s not showing the same kind of traction that it has historically… Transactional is an interesting model, subscription is an interesting model, but how much is the consumer ultimately going to be able to bear? All of those are being answered and discovered.”

“The biggest challenge we have is how to define a hit? What’s a hit when the biggest YouTuber has 32m subscribers and nobody knows who he is?” said Grace. “Once we define a hit, the monetisation will get easier… I think it’s going to get tougher and tougher. There are lots of great shows on Netflix that don’t get watched.” Santa Maria said in the French market there is a need for return on investment on these high-quality web series, but also suggested there may be a “big wall” between free, ad-supported content and the SVOD and other pay-TV services in the web world.

To end, Grace was asked about her earlier comments about the recommendation algorithms on Facebook and YouTube, and how digital studios deal with the fact that they’re not in control of how people find their videos.

“These platforms give you an immense amount of data on your performance. You can experiment and find the right format… Facebook has been very aggressively de-promoting YouTube videos in the feed, so you see YouTube creators uploading natively to Facebook,” said Grace, who said producers and creators will always adapt…. Producers, we’re like cockroaches! We like making new things and figuring how to break the system, and they’re going to change the algorithm, and there’s going to be smart ad-buying too.”