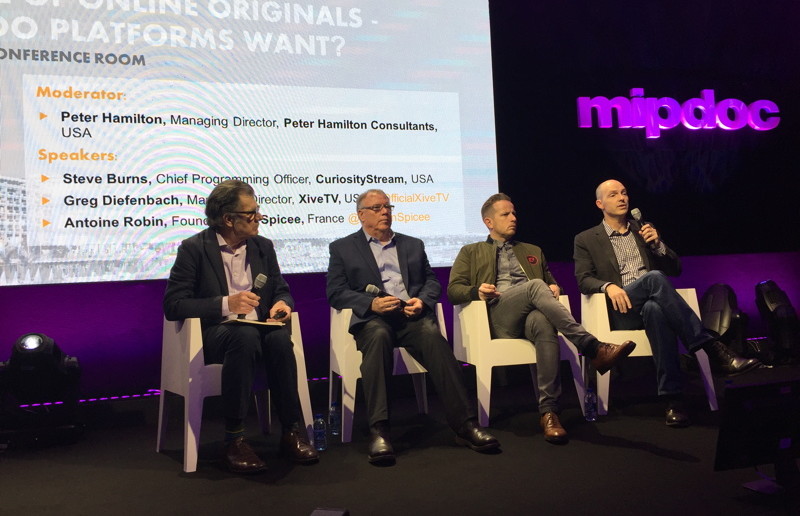 "Linear TV is the walking dead," said XiveTV, in a panel that also included Spicee and CuriosityStream.
By Angela Natividad on April 3, 2016 0 Comments

The panelists began by describing their service offerings. CuriosityTV is an editorially-focused niche offering with international ambitions, with mostly traditional documentary content.

Meanwhile, XiveTV focuses on long-form content, with an eye to audiences who still watch TV in their living rooms. “We think of VOD as computers or laptops or mobile devices, but 70% of our audience is sitting on the couch in the living room, watching TV across digital set top boxes through services like Amazon or Hulu,” Diefenbach explained. “So for our product, it’s a lean-back long-form documentary experience.” Xive is primarily a US-based service, but increasingly distributes elsewhere.

Meanwhile, Robin of Spicee colourfully described his company as “like Vice, but with virtue. We’re not for free. We’re journalists.” He placed a great deal of emphasis on the importance of paying journalists to do the often dangerous and gruelling work they do.

Next, a lesson in acronyms (which the industry’s now drowning in).: SVOD is subscription video on-demand, and AVOD is ad-supported video on-demand (Diefenbach hastened to point out that XiveTV does both). There’s also TVOD (TV on-demand, which is when you can buy shows to watch later, as you do on iTunes). Spicee, for example, provides both SVOD and TVOD services.

Stay with us here!

“PBS has Membership VOD now, where you actually charge,” added Burns. It isn’t clear how MVOD differs from SVOD, say, but we’re sure the distinction is very nuanced and clear for everyone involved.

But in case it isn’t, get with the programme—that’s the business we’re in now. “It’s an alphabetical mixture of many business models and it requires a lot of study to keep track of this,” Hamilton observed. “That’s the new model.”

And there are many ways to fund all these exciting acronyms. Burns, for example, placed a lot of emphasis on the learnings he gleans from social media.

Robin pointed out that the biggest challenge to OTT (over-the-top) players is rights. “Spicee commissions 80 hours of video a year, and our partner Ampersand represents 10% of the catalogue. Our biggest problem is the rights; there’s a big war between Netflix and Canal+ to take rights, so we prefer to own the rights. We’re a bit crazy to do this because we need money to do that. But that’s why we prefer to produce in-house.”

“This VOD space is exciting, but except for some of the big players like Netflix, it can’t commission original content without talking to the people with traditional revenue sources,” Diefenbach said. “You need to form a coalition for niche platforms like ours.”

The players also discussed their typical programme length. In the case of CuriosityStream, “One-third are short-form and can be anywhere from 2 mins to 20, but I’d say the average is probably 10 mins,” said Burns.

Spicee, on the other hand, produces “for 52 minutes because we work for Edit Paris, which is a distributor, and they sell our content at this length,” said Robin. “We split 52 minutes into 10 episodes of 5 minutes for smartphones. That’s very important.”

“Our content is long-form, feature-length, and hours mostly with some half-hour content,” said Diefenbach of XiveTV. “Most of our audience is consuming in their living room so, for our hour programmes that go out, our view-through is something like 70% of that hour so it’s very long-form engagement.”

As for celebrities, here’s another difference between small players and Netflix: They can’t always afford big-budget names, but it isn’t a big deal; generally they agree it’s a promotional play.

“We’re in an enormously crowded space with a lot of noise, and celebrity attachments are useful for helping break through,” said Diefenbach.

“Remember that Netflix and Amazon, they’re doing dramas and serials,” Burns added. Hamilton did point out that Netflix increasingly produces documentary content, but Burns writes them off as “feature docs,” whereas CuriosityStream does more “classic traditional non-fiction entertainment.”

Asked whether Spicee uses celebrity reporters, Robin was blunt: “I have no money.” As the audience chortled permissively, he elaborated: “We have 500.000 subscriptions and we spent zero marketing money, only Facebook and Twitter investments. So it’s totally disrupting marketing. If you can produce smart content and be polite on social, it’s not necessary to produce something every day or second. It’s very subtle.”

Diefenbach generally agrees with the underlying idea. “In this new space, what everyone’s talking about in branding is the relationship between the brand and the consumer, especially in a VOD environment where no one is going to surf into your space; it has to be an active engagement. Consumers have to step forward and self-identify,” he said. “You hope the presence of a celebrity will have a transferred relationship that conveys relevance for your brand and that space. But if you have great content that speaks to passions, you can build the relationship. It takes longer and it’s harder, but you can.”

Asked whether they fear a coming consolidation of their space, the panelists were less nervous than one might believe.

“We’re gonna see players flooding into the space for years to come. Consolidation will happen but I think that’s in 3 or 4 years,” said Diefenbach. “But I do think it’s inevitable. Linear TV is the walking dead. A lot of data might go contrary to this, but my feeling is that, when you look at the data around young viewers, their linear TV engagement is way down compared to older counterparts. And that’s the future. VOD will be the dominant consumption for video.”

Hamilton begged to differ. “Cable channels are locked into the distributors and have long term contracts with them,” he pointed out. “Operators offer their channels as a loss leader for internet and other services. TV won’t be like music, it won’t drop off a cliff. So it’s gonna be a long time before non-linear drives the entire market. I wouldn’t be too pessimistic about linear TV.”

“If any of you have young kids, do a thought experiment,” Diefenbacher challenged, turning to the audience. “They will not be consuming linear TV later on in any great amount.”