Martin began with a buzzgraph and word cloud of common keywords surrounding MIPTV, which were heavily impacted by major speakers and themes of the week, like Delphine Ernotte Cucci of France Télévisions, or Salto, their shared OTT project; and of MIPTV’s efforts to brand more around production. #InDevelopment and variants of production keywords featured prominently.

Among the top hashtags, Turkish drama composed 5 of the top 10. “Whether there are Turkish shows or stars here or not, Turkish content is always massively represented in terms of social conversation,” Martin observed. “This time there was a show here called Crash; when Turkish drama fans hear about it, they bombard social to support their favourite shows and actors. It’s a level of fandom really specific to Turkish drama.”

#mentoringmip, related to mentoring women in entertainment, also took a prominent spot. “It was an amazing event. We threw the hashtag together at the last minute,” said Campbell. “It was 8 tables of key women mentoring women in the industry… By the time we sat down at the end of the chat, we had about 400 tweets going.” 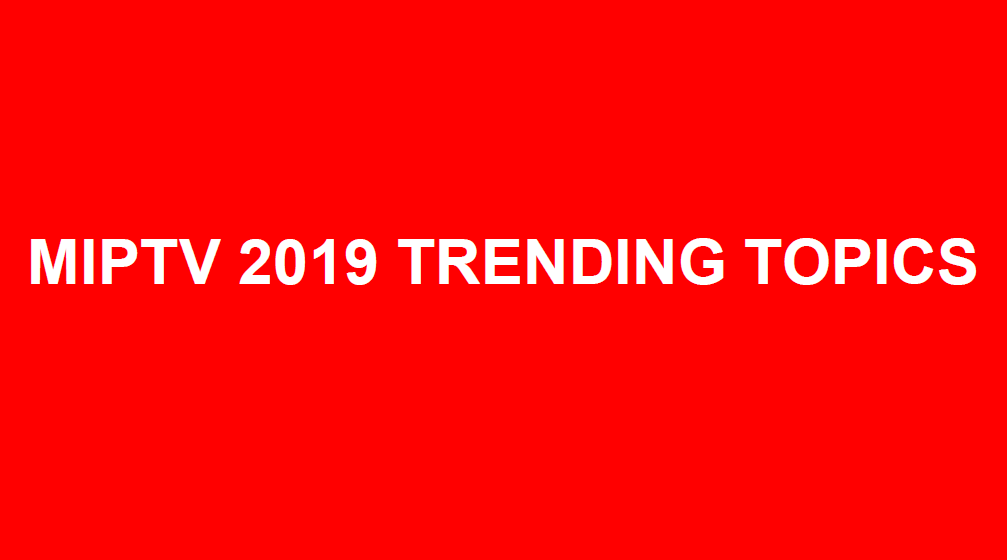 After that, we dove into the themes that each panelist noticed the most over the course of the week.

This was Campbell’s topic. “Everywhere I looked, whether it was the event, mentoring breakfast, trends around the awards, down to the programming… it was great to see women and diversity being represented everywhere,” she said.

She pointed to the #CANNESERIES pink carpet and overall theme of pink that permeated the Palais. And she cited Lucy Smith’s appointment as deputy director of MIP Markets, Beyoncé declining a Reebok deal over a purported lack of diversity, The L Word creator Ilene Chaiken‘s presence and platform, and Mo Abudu becoming the first-ever African woman to win a Cannes Médaille d’Honneur, of which three of the four winners were women this year.

Campbell feels the issue is unconscious bias, and that all this visibility is helping educate the market. “It’s not even the fact that it’s skewed in a decisive way; it’s just not being aware of it. More [awareness]helps create balance and inclusion for everybody,” she said, adding that “men can take a stand too, when they turn down panels with no women on them… or when stars say ‘I want my co-star paid equally’.”

Today, she observed, people can take these stands “without jeopardising your livelihood. Bigger players and men are stepping into the limelight.”

Guidoni pointed to the French 5050 en 2020 initiative, with the goal of having equal representation on set, in key positions and in writing rooms by the year 2020. He called it an ambitious goal and expressed hope that men get more space to share their viewpoints, too.

“There is some room for being frustrated,” Campbell replied. “But as things start to shift, that positive reinforcement, working hard to get exposure, creating allies to broaden that conversation… that’s where we are. If everybody embraces it, all boats rise and everybody wins.”

This was Guidoni’s topic, which tied into something he said earlier in the panel: “The problem behind the word ‘content’ is you forget the authors and creators behind it. Content doesn’t flow in pipelines; it’s not oil.”

Audiences are better educated now, and the capacity of shows to travel more freely outside local bounds is helping faciltiate that. “You can’t fool people. They know the difference between a good show and bad show,” he said, and the model is changing as platforms disrupt.

Guidoni used the example of a programme he saw this week, created by a German woman and a French man. They’re already enjoying interest from several broadcasters, including one German and one French; they don’t even have a producer yet.

“If you write something good, you have all the cards in hand to be there, to be an active person in the industry,” he said.

In relation to this, Bisson pointed out that book and comic book adaptations are huge right now. “We’re picking up 40, 50 book and comics deals a month. The feeding frenzy around existing written content is absolutely huge at the moment.”

THE STUDIO IS DEAD. LONG LIVE THE STUDIO.

This topic was Bisson’s. “I’m not saying Hollywood majors are dead; far from it,” he qualified. “They’ve reengineered their business.” He explained, “The first thing they did is move toward big budget and franchise movies. That opened the door for high-end drama. Secondly, they all plan to go direct, which threatens licensing of content to third parties, their traditional business partners. The third thing that happened is Netflix; their demand is global rights.”

This was a  turning point. “The most valuable currency in the industry today has become global access to content rights. It is of interest to everyone, whether you’re a channel, platform, a producer and increasingly a distributor.”

He also reiterated a theme that came up frequently during keynotes over the course of the week: Scale. “You need scale to be able to control your rights, finance the content, and move heavily into production,” Bisson said, pointing to the ITV and BBC adding “Studios” to their brands, or the fact that Viacom International Media Networks announced at MIPTV its objective to make $1bn in revenue from its studio activity.

He concluded with something he heard from the Banijay keynote, which he felt was “the quote of the market”: “What scale allows you to do is deficit your own shows.”

Rossignol talked about the power of non-scripted content. “There’s a need for niche content,” said Rossignol, who mused, “I think it’s also about being local and adapting to local needs, a challenge even Netflix, Amazon and Disney face.

“The audience is looking for specific content and it’s a great opportunity. For new players like us, the opportunity is to address the right content to the right audience. We’re not competing with giants, so the idea is to go on specific topics. Documentaries are a part of it.”

Bisson concurred: “Non-scripted on SVOD is something we’ve been tracking,” he said. On Netflix, and over the course of somewhere around 2 years, non-scripted “went from 5% to 17%. The idea of peak content or too much content is a red herring; we think nothing of having 800 channels in our country. And SVODs are starting to curate content streams to diversify.”

Currently, and based on data that points to people in his target being interested in the military, Rossignol is launching an army stories offering. “People love entertainment ,but also want to understand the world,” he said. “The world is changing also, and it’s getting a bit crazy.”