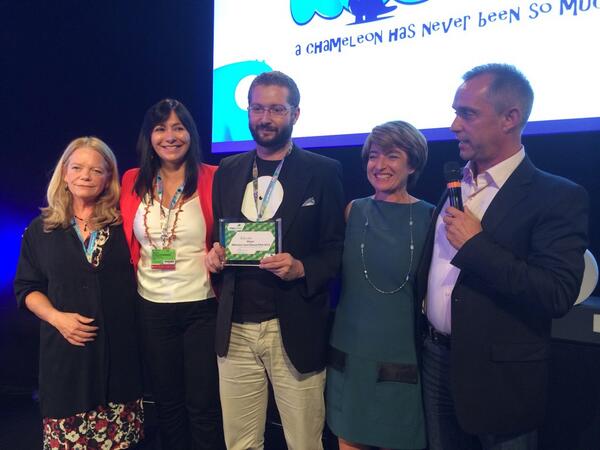 5 finalists hoping to be the next big kids' multi-platform IP: and this year's winner!
By Stuart Dredge on October 5, 2013 0 Comments

While plenty of famous children’s brands have already been mentioned on-stage at this year’s MIPJunior, it’s also a place for new IP to spread its wings. This afternoon’s MIPJunior International Pitch saw five new properties pitching their wares.

The five were (with links where possible): Being Zeth by Source Animation PVT in India; Goris the Gorilla from Split in Brazil and Gong in Chile; Koouka from Aldebaran Distribution and Vallaround in Italy; Nelly and Nora from Geronimo in Ireland; and The Little Train Choo Choo by JM Animation in Korea.

Each format was pitched to a jury of experts from the broadcasting world, including jury head Alison Stewart from CBeebies in the UK, and members Laurence Blaevoet (Canal+ in France), Anand Roy (Disney in India), Paula Taborda dos Guaranys (Globosat in Brazil) and Kenn Viselmann (of Kenn Viselman Presents… fame, from the US).

The key criteria: the content and its quality, the international angle, and the multi-platform potential of the IP.  Each project was pitched for six minutes, starting with…

Being Zeth was presented by animation producer Rajnish Arora and author / co-producer Elyssa Edmonstone. This is a show aimed at 6-10 year-old boys and girls, over 52 11-minute episodes telling the story of an alien robot called Zeth who wants to become human.

It’s a quest, where Zeth has to find all the vials of a potion, understanding along the way what it means to be human (with geography, history, art and science education aspects as part of the plot). “We want to get kids talking about a whole range of social issues,” said Edmonstone. Plans include games for tablets and smartphones, as well as books, toys and gadgets based on Zeth.

“It seems that you’re trying to do a lot in a short period of time,” said Viselman, to which Edmonstone replied that the show might expand to 22 minutes. And to a question about the digital aspects, she said that the aim of the mobile games will be to allow children to help Zeth answer his questions about humans and the Earth: so they’ll be joining in.

Goris the Gorilla was presented by creative director Guille Hiertz and executive producer Maria Graciela Severino. “I’m here to make a shocking confession: I really hate kids!” said Hiertz, in a humorous introduction. “I don’t hate all kids, just little ones! The angelic ones, just like my neighbour Edo… He and his goofy purple gorilla Goris.”

Yes, a neat segue into the pitch for the show, with each episode starting with Edo having a crazy idea, and Goris trying to dissuade him from carrying it out. And every time, Edo’s scheme ends in disaster and apocalypse for the Earth (in the pitched example, he turns his house into a swimming pool, which then bursts, shoots a jet of water into space and puts out the Sun). The real theme of the show, which is aimed at 8-12 year-olds, is friendship, with plans for apps, webisodes and merchandise.

In answer to a question about episode length, Severino explained they’ll be 26 11-minute episodes. How will they keep it fresh once the concept settles down? “We have lots of characters that will bring some new feeling in the series,” said Hiertz. “Frankly I don’t think the calamities and the apocalypses we could produce are limited!” And he said 11 minutes is about the right length: “We have to explode the Earth, and then de-explode by the end of the episode…”

Koouka was presented by distributor Anna d’Alessandro and producer Federico Vallarino. Koouka is a chameleon who can change his colour, his size and even become the material that he touches. “Too bad that most of the time Koouka cannot control his powers,” explained d’Alessandro. “Our hero becomes a little clumsy guy. The results: funny gags in a slapstick format… A sort of blue chameleon version of Mr Bean!”

The theme is identity, and how the natural desire to be accepted by others can stop people expressing their real selves and what they want. The series will be one-minute self-contained episodes, divided into blocks of five that explore related themes: the beach, football, shopping. There’s no dialogue. Koouka actually started life on Twitter and Facebook, posting a status each day. That will continue as a way for fans of the episodes to explore his world. And yes, there’ll be apps, games and merchandise.

Guaranys asked about the structure of the stories. “To make it more flexible, we could have one minute episodes, but then blocks of five to make the story more diverse,” said d’Alessandro. “But they are independent and self-contained, absolutely.” Stewart asked about other characters: for now it’s just focused on Koouka, but there will be other characters in time. Roy wondered if children would tire of the format once its main premise – the transformations – settled down. “You have to remember we’re Italians: very creative!” twinkled d’Alessandro.

Nelly and Nora is the work of Geronimo from Ireland: an animated story of two sisters: Nelly is five and Nora is four, and their mum and dad also feature in the show, which takes place mainly outdoors. “The weather is a big player in the series… in fact every episode starts because of the weather,” said Geronimo’s Emma Hogan. For example an episode based on shadows of sandcastles at sunset, and another involving collecting raindrops in household objects to play music.

“The great thing about this show is there are so many stories than can happen because of the weather.” And each time the girls wear suitable clothes for the weather theme of that episode, with the theme being that the girls can adapt to different conditions and make their own decisions. Transmedia aspects include plush dolls of Nelly and Nora, a book and an app that will send the girls off on holiday.

Viselman asked about the girls’ parents: “They’re visually there, but they’re in the background,” said Hogan. The plan is for 52 seven-minute episodes – 11 minutes was tried in development, but Geronimo felt the longer length weakened the story of the sisters. Meanwhile, Roy praised the use of music in the episodes. Geronimo has also worked with a composer to create the music, rather than using a sound library for the weather.

The Little Train Choo Choo was presented by animation producer Sin-Sik Kim. This tells the story of a cute train and his friends: a rabbit, a bear and a robot. The friends sometimes fight, but also learn how to share, and they play with maths. “This animation is about learning mathematics. However, you will not notice any equations,” explained Kim.

26 11-minute episodes have been completed so far out of a planned 52 so far. The target audience is 3-7 year-olds, with the series due to premiere in South Korea on the KBS 1 channel later this month. The educational aspect means there’ll be expanded materials for use in schools, and there will also be e-books, apps, toys and merchandise.  The first app will use augmented reality features: children will point a phone at physical flashcards to see related animations.

Roy asked how the show is better or different from other preschool train-centred shows, like Thomas & Friends or Chuggington. Kim replied that the difference here is the focus on developing a mathematical mindset “with contact with others and with nature”. Viselman was concerned about the needs of three year-olds being very different to those of seven-year olds in terms of maths. “We don’t think the age difference is a problem because the focus is on developing a mathematical mindset, rather than a concrete mathematical knowledge,” was Kim’s answer.

And the winner was…

The judges retreated to consider their verdict, then returned to the stage to reveal the winner: “We’ve chosen the property which we felt presented the most original characterisation, and the most potential to turn into something that could become an international hit,” said Stewart.

And that winner was Koouka from Aldebaran Distribution and Vallaround. Uncontrollable shape-changing chameleons For The Win! But we suspect you’ll be seeing several of the impressive finalists on multiple screens near you (and your children) soon.