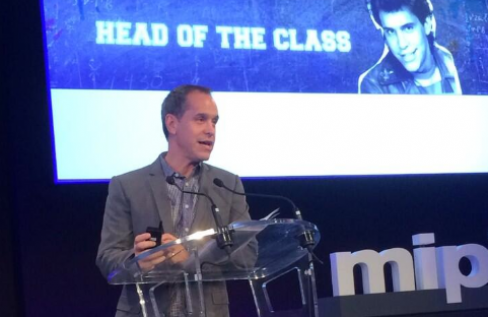 AwesomenessTV, now owned by Dreamworks, produces content for "the YouTube stars of tomorrow"
By Angela Natividad on October 6, 2013 0 Comments

Watch this and more MIPJunior sessions in full video, here

His illustrious career started as mullet-sporting Eric Mardian in Head of the Class. But if you’re an early-born millennial, you may know him best for his later projects: All That, One Tree Hill, or Kenan and Kel.

Then the internet happened, and the explosion of YouTube, transforming perfectly ordinary kids into stars, like Fred.

“When (Nickelodeon) asked me to talk to Fred”, who was making waves with teens, “I thought my career was over,” Robbins joked.

In the end, he became such a fan of Fred that he raised funds for the “Fred” film independently. “It’s still one of the highest-rated movies in the history of Nickelodeon,” Robbins beams. Three sequels were produced in the years that followed.

A lot’s changed for him since then. In 2012 he launched AwesomenessTV, a YouTube-exclusive channel for kids and teens, purchased by Jeffrey Katzenberg’s DreamWorks Animation in May 2013.

“It was in my experience, watching how my kids consumed content, that I realised there was disruption brewing,” Robbins reflects. “What used to take me years to develop and get on network TV now just takes two weeks. The whole window has collapsed for us.”

AwesomenessTV launched with over 20 shows — an amount that peers considered risky. But Robbins sensed it was the right choice: “We — as adults — like to eat meals. Kids? They snack a lot.”

Especially with content they love. “Deliver what they want, when they want, and constantly refresh it.”

The success of AwesomenessTV is a testament to his being right: today it boasts 1 million subscribers and 200m video views. Half of the latter are from outside the US; half is mostly mobile — an opportunity Robbins has no intention of losing.

“We’re gonna live everywhere. YouTube is just the beginning,” he says. Right now, his team’s working on a mobile app and PlayStation access.

“If you want to reach and engage kids, you have to go where they are,” Robbins stresses. “Of all the entertainment channels on YouTube, we have the highest engagement for kids and teens.”

And the content isn’t necessarily different from what network producers know. One AwesomenessTV show, Side Effects, was made for YouTube, but “looks like it could be on TV,” said Robbins.

Neither should we be surprised. “What’s happening online today is similar to what happened on TV 25 years ago. Just as brands like MTV changed TV, new brands like AwesomenessTV will change the ‘net.”

It’s simply a question of being super-targeted and knowing your audience. “For us it’s kids and teens … we know who our viewers are and what they’re telling us.”

And what are they telling us?

“When you speak to kids, the No. 1 thing they want to be is famous,” Robbins reveals. “They don’t even know for what. They just want to be famous. That’s what’s beautiful about YouTube,” and the reason why he decided to launch a multi-channel network: “for the kids who’d be the YouTube stars of tomorrow.”

Providing that chance is crucial as the lines of consumption and participation blur. The recipe for AwesomenessTV’s success can be distilled thus: “We are strictly one demo. We are 25m teens. They don’t care about CPMs… all we promised them was the chance to participate. And they came in droves.”

Luckily, the cost of failure is much lower on YouTube than on TV.  “My Nickelodeon colleagues will produce two pilots [to ensure success],” said Robbins. “Now we can produce multiple pilots a day.”

Not to say this is a kiss of death for broadcasters. “People are watching more TV than ever before,” Robbins reassures. “We’re just filling periods of time that kids have… when they’re waiting at the dentist” — with help from their mobile devices, of course. “We live in a world where people are impatient.”

But it is clear that broadcast moguls sense the opportunity. “9 months into the process, AwesomenessTV was bought out by Jeffrey Katzenberg of Dreamworks Animation,” Robbins reminds us. “That should tell you a lot about where the space is headed.”

Has the acquisition changed the way Robbins works? Has, for example, Katzenberg asked Robbins to make a film, an audience member asked. “No, he wants me to stay in my lane, and stay out of his business,” said Robbins.

Watch this and more MIPJunior sessions in full video, here