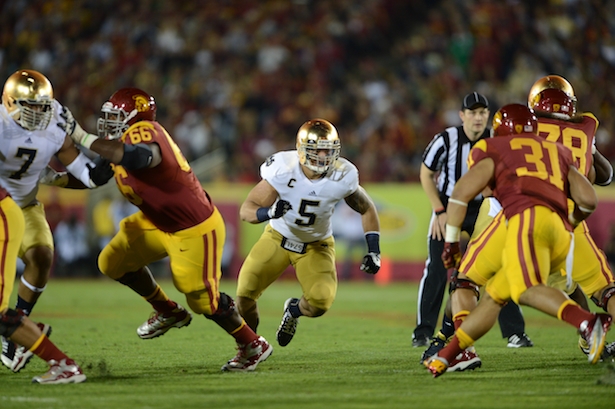 US-based sports channel ESPN has partnered with Ford to seed replays and highlights of college football games on Twitter.

Each clip will be selected by ESPN’s team of editors before being embedded in an individual tweet on the network’s @ESPNCFB handle. These won’t require users to leave Twitter in order to play the videos, and can be viewed on desktop, tablet or mobile versions of the site. The highlights will be preceded by a short advert for the Ford Fusion – the official partner of the sports network – and both Ford and ESPN will use Promoted Tweets to advertise the service beyond their followers.

‘When it comes to college football it’s a tremendous opportunity to watch across all our screens,’ said Lisa Valentino, VP of digital and mobile advertising sales at ESPN. ‘That appetite is tremendous.’

The introduction of Twitter Cards in 2012 has enabled brands to post multimedia-rich tweets, rather than being limited to text and a hyper-link. The likes of YouTube, Official.fm, Soundtracking and Rdio have quickly adopted these by embedding sound, video or summaries within their Twitter Posts. Talksport has also improved its coverage of English football by adding real-time sound bites of the action into its social media coverage.

ESPN’s announcement, however, is perhaps the most significant to date, with users now being able to see videos of touchdowns, fumbles, highlights and replays over Twitter, even if they don’t subscribe to the channel. It’s a smart move, and bolsters awareness of the network’s coverage of college football in the US. It also reinforces the brand’s commitment to mobile, which ESPN’s VP and general manager, Michael Bayle, famously described as the ‘first screen’ last January.

For audiences, the service should be genuinely useful, providing another avenue for them to stay up to speed with important fixtures – and whilst text updates may have served a purpose beforehand, there is nothing quite like seeing the action in the flesh. The clips are easy to view, and don’t require fans to follow a link and load a third party site, which can be a slow process on a phone.

Richer clips should also encourage viewers to share/retweet the posts – which in turn will generate a wider reach and awareness for both Ford and ESPN. Twitter has currently restricted access for Twitter Cards, cautiously rolling out the service and monitoring the results. But it seems clear that these early examples, such as ESPN’s highlights, will become commonplace on the platform in months to come. For brands, it’s increasingly important to assess whether these could benefit your business’s presence on social media.

More branded entertainment excellence will be honored in Cannes this April, as the Brand of the Year Award returns. Submit by February 22 here: http://bit.ly/MIPCubeBoY

This is the latest in a series of blog posts from Contagious Feed, a database of the most creative and effective marketing campaigns around. Contagious – a MIPTV/MIPCube content partner – guides and advises brands and their agencies on competitor activity and future opportunities. More information here.