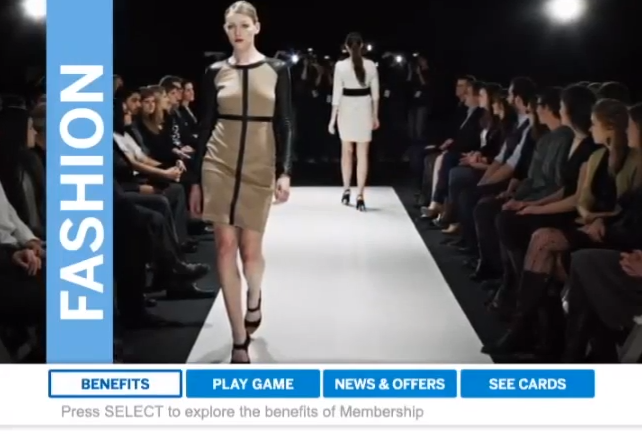 American Express has launched an interactive branded TV channel in the US.

The channel, which launched in September, features information about American Express’s cards and benefits, promotions, games, updates, and original content. Both current and prospective American Express customers can interact with the content and the company estimates that it should reach 55 million US homes.

The channel is available via providers AT&T U-verse, Cablevision, DirecTV, Dish and Verizon FiOS, as well as through Samsung and LG connected TVs. Viewers will be directed to the channel via interactive commercials, banner ads, and TV channel guides.

American Express’s channel will be available for a year as part of a campaign with Mindshare and specialist interactive TV agency BrightLine. The content will regularly refresh throughout the year to remain seasonally relevant.

Past content included a live digital music series American Express Unstaged, which streamed an exclusive concert of The Killers via the channel on 18 September. American Express reported that the initiative drove a 50% lift in cardmembers’ perceptions of Amex as ‘innovative’ and ‘forward-thinking’. Meanwhile, games included Photo Hunt, which encouraged viewers to interact with card benefits and read real customers’ tweets.

In addition to the branded channel, the credit card company has teamed up with broadcasters Fox and NBC Universal, as well as social TV app Zeebox, to allow viewers to use their mobiles to buy products while watching TV, what it calls t-commerce, (television commerce).

Thanks to a partnership with Fox, viewers of its New Girl sitcom will, for example, be able to buy items featured in the store from household goods to fashion through the FOX NOW iPad app and the channel’s shopping website. To launch the programme, American Express is offering cardholders who have synced their credit cards with Facebook $35 of credit if they purchase an exclusive item from the show.

The partnership with NBC Universal and Zeebox enables viewers to buy products from the shows Life After Top Chef, Fashion Police, and Tia & Tamera, offering a similar one-time $35 statement credit.

Although brands such as Renault have their own TV channels and others like L’Oréal have been experimenting with interactive branded content through the Xbox, BrightLine has described American Express’s campaign as ‘the largest interactive TV campaign ever‘.

For American Express the benefit is clear: it allows the brand to be ‘always-on’ and promote its initiatives, even when more traditional commercials are off the air. But the key to the channel’s success is the quality of its branded content. For actual information on promotions and benefits wouldn’t prospective and current cardholders be more inclined to visit Amex’s website? Luckily for American Express, its sponsorships of the U.S. Open and Tribeca Film Festival and its Unstaged concert series, means that has more great content at its disposal and more assets to sweat via its channel.

Meanwhile, shoppable TV is an interesting area for American Express to delve into. We’ve seen TV broadcasters experiment with shoppable TV before. For example, USA Network partnered with Shazam to allow viewers to buy products featured in the spy drama Covert Affairs, but it’s curious to see a credit card company experiment in this space. Exploring new digital avenues for customers to use its services to make exclusive purchases can only help differentiate American Express as a forward-thinking brand.

This is the first in a monthly series of blog posts from Contagious Feed, a database of the most creative and effective marketing campaigns around. Contagious – a MIPTV/MIPCube content partner – guides and advises brands and their agencies on competitor activity and future opportunities. More information here.