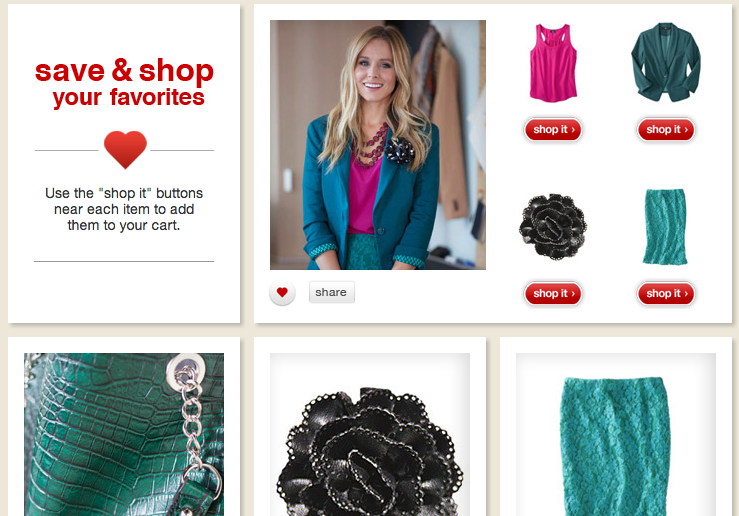 What about films where you can buy actors' clothes as you watch? OgilvyEntertainment's Marks tells how Target did it
By Abigail Marks on October 25, 2012 0 Comments

Photo: With Target’s Falling for You, viewers can buy cast members clothes as they watch the short films they star in (here, Kristen Bell)

Many brands playing in the branded entertainment space do so in an experimental fashion. With minimal strategic direction or established expectations of outcomes, how is it possible to know when an experiment is successful? Because branded content is designed to reach specific consumer segments, solely relying on impressions to measure ROI just doesn’t cut it. Branded entertainment is about reaching an addressable audience. For some brands, that may be mass, but for many, it’s about real engagement with a focused audience.

We like to argue that branded entertainment can be implemented in a strategic manner, the same way any element of the marketing mix is used as a tool to drive key brand objectives. The struggle with branded entertainment is the inability to measure impact – but this can be addressed by setting goals measured by key performance indicators and strategically designing the elements of a programme to capture intermediary measures against those targets.

A-list talent aside, the content-led programme also features a sophisticated digital interface that makes the content fully shopable and shareable – all without interrupting the content experience.

That’s right, housed within the same screen, products scroll by as they appear on screen and can be saved, purchased, tweeted, pinned and posted to Facebook, all actions triggering an automatic pause of the content. Hello, future.

On the back-end, the brand can also directly tie action, engagement — and yes, SALES — to the content with the right data capture. Win-win-win.

While there is much to celebrate in this initiative, there is still some work to be done. Between the talents of Mr. Abraham and the product placement, enlisting the talents of a great product merchandiser would have ensured that screen time for products and shots were a bit friendlier to check out the Target goods (some we never see, but are suggested for the outfits – i.e. nail polish, platform pumps).

I realise this is a challenging element and entertainment was prioritised above brand products, but this close to the transaction, I would argue that playing up the brand a bit more is reasonable.

Additionally, many of Target’s products are sold through their ‘Shops’, key brands as collaborative experts for style, home and other departments. It would be great to see this brand-differentiating factor brought through the content. Otherwise, it doesn’t feel like truly “ownable” content, other than the Target logos and subtle references to Minneapolis.

All in all, big kudos to Target, Space150 and Olson.

Abigail Marks is associate director of OgilvyEntertainment, the branded entertainment arm of Ogilvy & Mather, with whom MIPTV has been working on brand-focused panels since 2007 (find all of 2012′s panels here). This is the third in a series of regular posts, which will also be appearing on TWEED, OgilvyEntertainment’s blog.