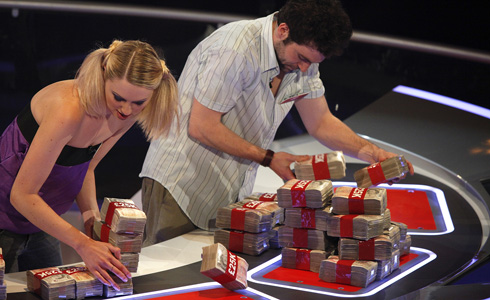 While it would be pretty much impossible to quantify  how many deals will be done at MIPTV, one thing is certain: classic contracts, covering the acquisition of a property for TV broadcast, or simple co-production deals, are increasingly rare.

In terms of which programming types will be traded in volume, formats – cost-effective and ready to be tailored to pretty much any audience – look set to be centre stage, alongside drama series and animation.

“In terms of trends, we think formats that have a multiplatform element built in will be a big draw this market,”Tom Toumazis, chief commercial officer, Endemol, says.

“We’re continuing to see a rapid roll out for our most recent interactive hit, The Money Drop (photo), created by Endemol UK. So far it’s been sold to 14 territories and counting,” says Toumazis.

“One of the hugely successful elements of the format is the way it allows viewers to play along simultaneously online at home – so far we’ve had more than 4 million game players from around the world. We expect there’ll be more big news on this format soon including major markets coming on board and the launch of Play Along Apps for the iPhone and iPad.”

According to Toumazis, the Endemol team have plenty to be excited about at this market: “And I don’t just mean the big party on the beach we’re throwing on the Tuesday night,” he jokes. “This year we’re bringing the lead star and showrunner of Endemol Worldwide Distribution’s latest addition to its drama portfolio – Endgame. It’s a truly gripping new series which has just launched in Canada and we think it’s going to be a big hit. Also our formats team has a fantastic line up, including Club VIP, a series from Endemol France which pits iconic reality-TV celebrities against a group of unknown wannabes, to name just one format.”

Nick Thorogood, MD Food Network, EMEA, is also optimistic about MIPTV 2011: “This MIP there is definitely a feeling that good things are coming, with lots of fresh new ideas and re-invigorated programmes being offered,” he says.

“Deals will certainly need to reflect a more platform-agnostic approach to content – with assets having rights available for all manner of devices, and this in turn links directly to the idea of value-added shows where there is content that can feed a second screen, someting that I think will be particularly important in the lifestyle genre.”

Co-productions and co-funding are more important than ever in order to get series made and on the air, but there are drawbacks: “A lot of projects need many partners before an idea gets the greenlight, and although there is less risk for broadcasters and more opportunity to make the budget go further, it does mean that the production partners and the idea itself have to have a wide editorial vision suiting many markets to make such agreements work,” Thorogood says. “And this is affecting the ways in which shows are being put together.”

Paul Heaney, president of Cineflix International, expects broadcasters to be increasingly assertive: “Broadcasters these days are very sure about what they want and will move fast to take it off the market,” he says. “High-volume series and high-volume deals seem to be increasingly prevalent, and I expect there will be more than ever at this MIPTV due to the expansion of DTT platforms and the growing need of channels to slot a show across days and weeks. For distributors, being able to offer volume is now a standalone USP because channel launches often need swathes of similarly themed programming.” 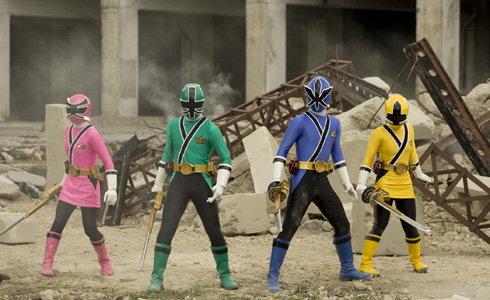 Alongside new shows, there is also demand for golden oldies: “The market continues to be receptive to the reinvigoration of classic/retro properties with major brand equity such as Power Rangers, Voltron, Teenage Mutant Ninja Turtles, Transformers, etc.,” Fernando Szew, CEO, MarVista Entertainment, says. “As the recently-appointed international television distributor for the Power Rangers franchise, a major focus for MarVista Entertainment at MIPTV will be understanding and assessing how broadcast lives within and across all media platforms for the new series – Power Rangers Samurai (photo) – as well as the classic catalogue. With the multitude of platforms now available to content providers, it has become essential to approach the distribution of a property in a transmedia fashion to reach a new generation of fans whose entertainment destinations have vastly expanded in recent years beyond television.”

Francois de Brugada, executive vice-president, Banijay Entertainment, also sees an industry increasingly transcending the traditional boundaries of TV. “The effect of this is that television companies’ competitive set is changing, as is their product, and the way it is acquired and sold in Cannes,” he says.

“Content suppliers aren’t just competing with other television producers, they’re now competing with any other producer of leisure activities, in fact anything that attracts eyeballs! Our ideas are no longer confined to a number of episodes of a television series, we’re now free to sell all ideas and concepts that have the potential for multi-platform exploitation. From a simple, smart interactive app, to a complex mega-entertainment format. Although international TV buyers remain Banijay’s main clients, we are now also working with (and for) web portal owners, gaming platforms, social media networks, publishers and consumer product manufacturers.”

Gary Smith is senior reporter for the MIPTV News & all MIP Publications. You can see his last MIPBlog post, on coproductions, here.