International content to and from France: Which shows work best where?

Parrot Analytics analysed which countries’ content appeals the most to French audiences; and where in the world French content is best received...
By Mike Broster on December 6, 2017 0 Comments
17
17
Shares

This is the latest in a series of posts from Parrot Analytics, looking at which local content performs best at home and globally.

France has a thriving TV industry with major content-producing broadcasters including TF1 and France Télévisions, venerable independent production companies like Gaumont, and more recently SVOD originals are making a splash – such as Netflix’s Marseille (top photo). However, this is the global era of content and the output of a single nation is no longer enough for today’s connected audiences. Equally though, not all content has the same appeal everywhere: for example, Scandinavian Noir may transfer well to Germany but fails to enthuse audiences in other markets like Indonesia.

With that in mind, Parrot Analytics analysed a year’s worth of demand data to answer which countries’ content is the most in demand in the French market. Additionally, we used our extensive dataset to answer the inverse question, and determine where in the world French content is best received – and worst received.

To perform this analysis, the average demand in France over the last 12 months was found for all the shows originating in each country, i.e. the French demand for every Brazilian title was obtained and these titles were averaged to get “French demand for Brazilian content.” Some content is co-produced in multiple countries; these exceptions are included as data points in each market they originate from.

This process gives us the five countries that have the highest average demand for their titles in France, expressed as a percentage of the French demand for an average French title. The below graph therefore shows how popular titles originating from outside of France are, compared to the average demand for French-produced titles, within France. 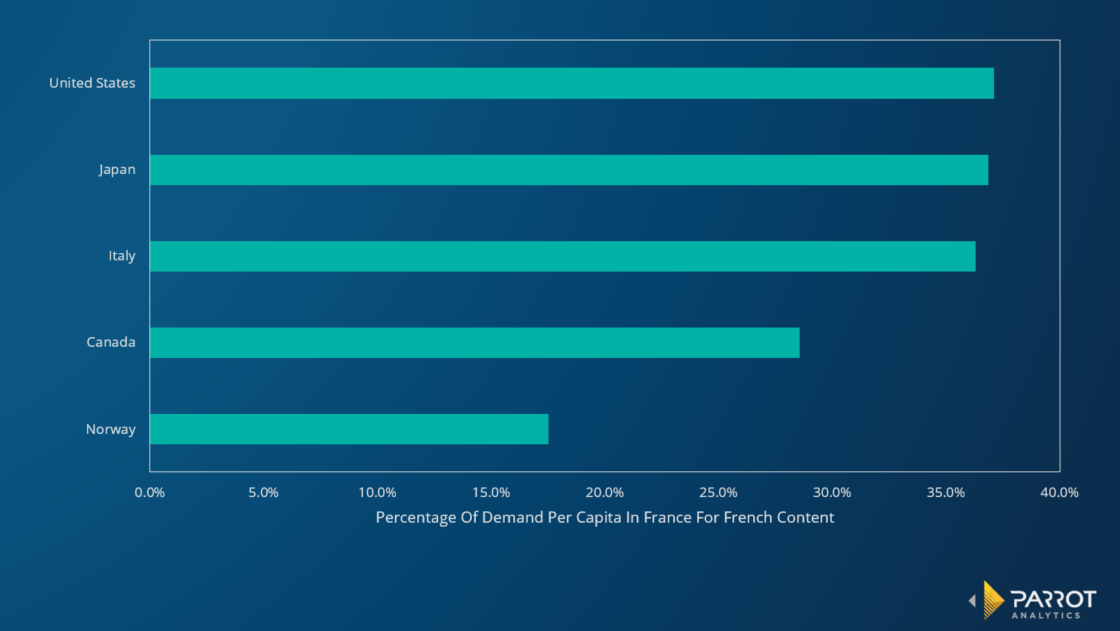 Unsurprisingly, the US dominance of popular culture is a strong here as anywhere; helped by global blockbusters like Game of Thrones and The Walking Dead, the average US title has 37.1% of the demand of a French title.

The second highest demand is for shows from Japan, the typical title of which has nearly as much demand as a US title with 36.8%. The strength of Japanese content will be no shock to those who pay attention to French trends as anime is a very popular genre in France, with titles like Dragon Ball Super and Naruto: Shippuden driving demand.

In third place is Italy. As a close geographic and cultural neighbour that creates many highly praised dramas, it is logical that Italian content travels well to France. Gomorrah and Borgia are two such Italian dramas that are in-demand in France.

As one of the biggest countries with French as an official language, Canadian content is fourth most in-demand in France with the average Canadian show having 28.6% of the demand of the average French title. Drama Unité 9 and science fiction show Orphan Black are some of the key shows driving demand for Canadian content in France.

Finally, Norway is the country with the 5th most-in demand content in France. This is of course largely due to fans of the many crime dramas coming out of the country, but also in part due to the high demand for teen drama Skam.

The reverse analysis was also done, where demand in other countries for French content over the last 12 months was found to determine how well French shows perform around the world. This graphic therefore shows the demand in each country for content originating from France – expressed as a percentage of demand for the same content in France.

The region with the highest demand for French content is Africa with 18.1%. Most of this demand comes from French-speaking areas like Senegal, which is enthusiastic for French-originating content with 65.4%. African markets are followed by Europe with 15.9%, where again a large amount of demand is coming from the other French-speaking countries in the region like Belgium and Switzerland.

Conversely, the lowest demand for French content is from Asia, which has on average 5.2% of the demand per capita of the same shows in France. Africa has around 3.5 times more demand for French content than this region, so the same show will on average perform 3.5 times better in Africa and 20 times better in France than it will in Asia. The best individual market in Asia for French shows is Vietnam with 10.9%: twice the regional average.

The overall picture here is that French content is very strongly Francophone. If the market does not speak French, they are unlikely to have high demand for French content. This conclusion may seem obvious, but the language barrier effect is strong for French titles. As a contrasting example, Turkish content has higher than average demand in Latin America despite there being very few Turkish language speakers in South America.

This analysis may indicate that there is an underserved market here; the right company localizing the right shows could find great success bringing great French titles to the rest of the world – titles that at the moment are virtually unknown outside the Francosphere. 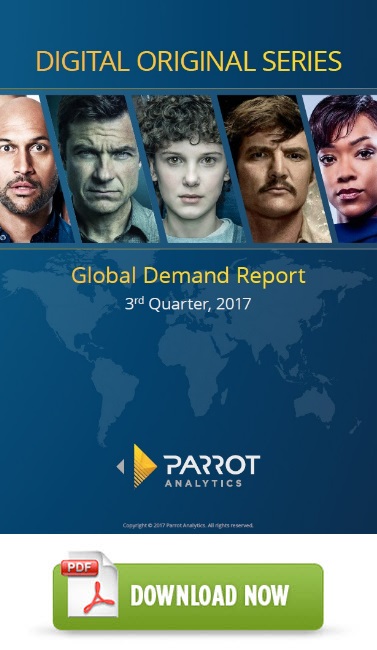