The famous British tank engine sets off around the world, while Russian animation makes its Cannes debut.
By Stuart Dredge on October 15, 2017 0 Comments
23
23
Shares

Thomas & Friends (pictured above with the Mattel team at the MIPJunior Opening Night Party) went first on Saturday, with an emphasis on some new friends created specifically for the new show with diversity and a global outlook in mind for the 26 x 11-minute episodes.

“Thomas is truly a beloved brand, however he has to remain competitive for today’s pre-school environment,” said Kate Schlomann, general manager of Thomas & Friends for Mattel, which conducted research with children to pick their brains on how Thomas’ adventures could evolve.

“We haven’t messed too much with the core Thomas DNA,” promised Christopher Keenan, SVP and executive producer at Mattel Creations, as he introduced a series that will take Thomas away from his home-island of Sodor to visit China, India and Australia for the series with more countries in store for an upcoming movie.

“One of the exciting things about taking Thomas around the world: it really opens up our world. We have so many more exciting things to write about from new characters, new locations, just adding new colours. And we can do lots of stories around animals, which we know children love,” said Ian McCue, director of creative content at Mattel Creations.

The show will see Thomas spending four or five episodes in each country, while the new engines that he meets will be key to the series’ appeal. “We’re introducing two new female engines… to just really get a better gender-ratio balance in the show. Up until now we’ve had six boys and one girl in the sheds. It didn’t seem very fair! Now we’ve got three boys, three girls and our hero Thomas making it seven,” said McCue. One of the driving forces behind this change was explained by Schlomann: “About 50% of our audience is girls,” she said. But Mattel has also partnered with the United Nations to include its sustainable development goals in the series, including issues like gender equality, climate change, eradicating poverty and hunger, and improving education and sanitation.

“What we see today is environmental degradation with climate change that is actually threatening the future of the next generations,” said Maher Nasser, director of the UN Department of Public Information’s outreach division. “This show presents an opportunity for pre-school kids to learn about these issues, which will affect their future, and to become global citizens.”

“Life lessons have always been incredibly important to Thomas & Friends. It helps parents to talk to their little ones at home and make them better people for the future,” added Micaela Winter, producer of Thomas & Friends at Mattel. “By taking these goals into content in an entertaining way so that children can understand them, it really creates discussion moments at home… We’re hoping that with this work with the UN we can help make better global thinkers for the future with our audience.”

Winter also talked about one of the new trains in the series, Nia, who hails from Africa. “We really wanted to make sure that the character we were bringing to life on screen was a good representative of Kenya,” she said. “But also that she’s a strong, empowered woman, who boys and girls alike can really look up to.” Nasser chipped in: “Showing that from a very young age is very important for full empowerment as they grow older,” he said. Maher Nasser from the UN and Mattel’s Micaela Winter

Mattel was keen to stress that Thomas & Friends: Big World! Big Adventures! won’t just be crowbarring serious issues into its plotlines at the expense of entertainment. McCue promised a pacier feel to the 11-minute episodes, and some surprises for young viewers.

‘What’s important is we’re finding the right balance between reinvigorating the show whilst retaining the core DNA of what Thomas is all about. And that’s where it’s working really well for us. It’s important to keep that heritage that Thomas has had for 73 years.” After the screening, the panelists took the lead as MIPJunior attendees boarded a customised-for-roads Thomas train to the conference’s opening-night party. 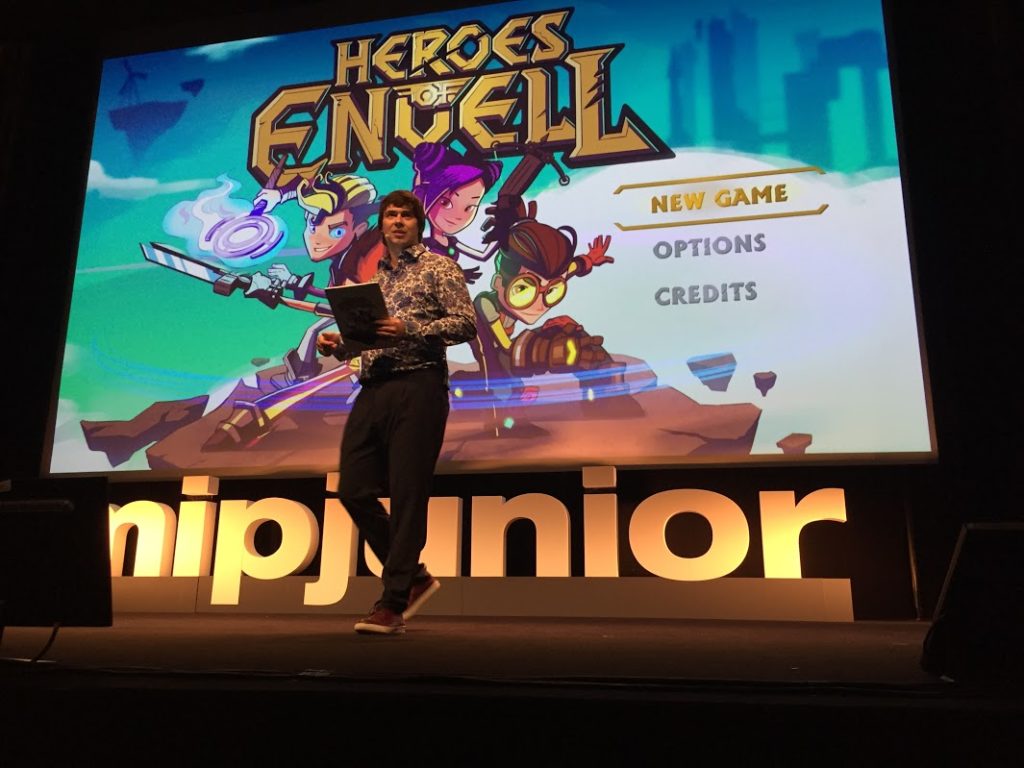 On Sunday, DTR and Signal Media presented the World Premiere Screening of Heroes of Envell. Created by Anton Lanshakov and Evgeny Golovin, it takes place in junior high, where four promising students find a laptop containing a mysterious game. Like Jumanji for digital kids, the laptop turns out to be a portal into the game world itself—where the adventures and dangers are very real.

CEO Mikhail Kovalchuk of Signal Media International introduced the screening, touting the success of digital and immersive entertainment among children, especially VR and gaming apps. “Kids watch us on our digital platforms,” Kovalchuk said. “In the middle of last year we developed an SVOD platform for kids and it’s a proven success in Russia.”

He added, “The kids audience is the most demanding, the most progressive and the most grateful.”

But it isn’t enough to focus only on the youngest tranche in the kids set: As Kovalchuk astutely observed, preschoolers grow up and become tweens. “We have measured this effect and have started to create brands for young teens,” he said. “They have their own eye, philosophy, interests. Teens already have life experience and already think they’re adults. The most interesting thing for us is this audience has their own world.”

Heroes of Envell—made for 8- to 14-year-olds—is the result of these considerations. And its mix of retro-gaming aesthetics and 3D animation, coupled with the deep stakes shared between its protagonists, is incredibly cool. 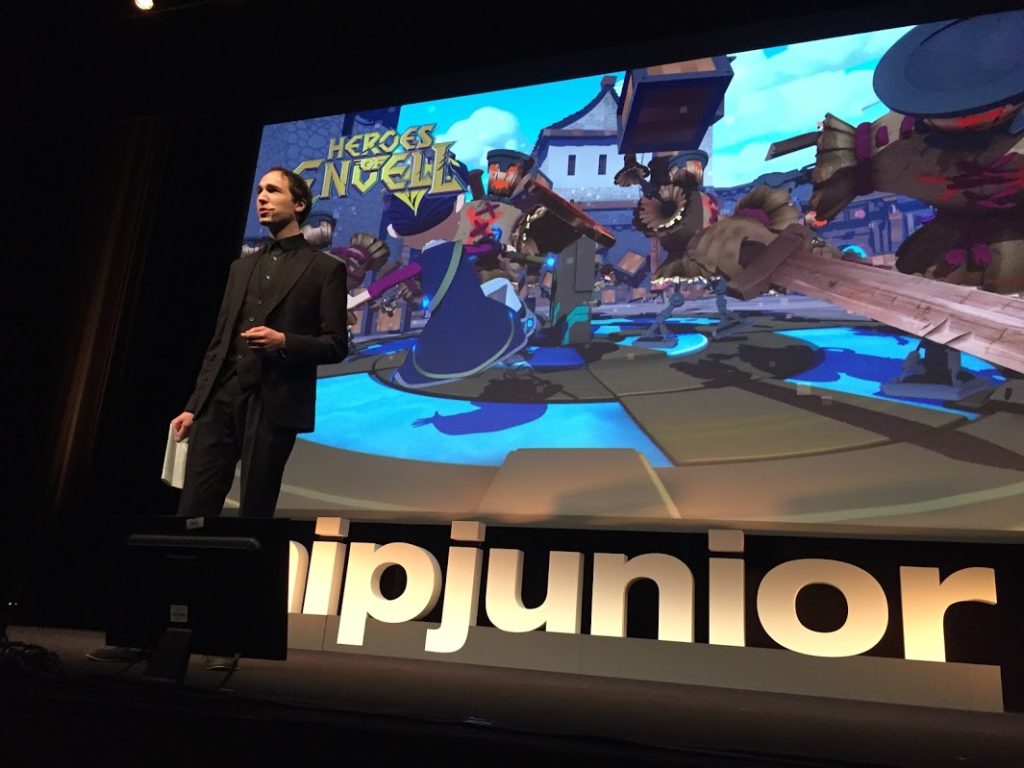 At the end of the screening, Anton Lanshakov, director at Parovoz Animation Studio (shown above) elaborated on what else makes Heroes of Envell special.

“My personal passions drove me in this project,” Lanshakov said. “When we started this, I didn’t want Heroes of Envell to be a stereotypical cartoon; I wanted all the characters to be based on real ones, no stereotypes. I write about my friends.”

The creative team made every effort to ground the series in reality. A closer look at each episode will reveal heavy cultural references: Posters of John Lennon and Nirvana line walls, for example. “We have dozens of secrets and easter eggs hidden throughout episodes—even secret coins hidden in the background!” Lanshakov declared.

But there’s more to Heroes’ true-life roots than posters. “We have kids who are vulnerable, but who think they’re already grown up,” Lanshakov pointed out. “This is a coming-of-age story, a drama.”

In keeping with that theme, he promised a romance in the sixth episode of the series. Of course, “It will be first love,” Lanshakov acknowledged. “It will be romantic, or embarrassing—or both, as it was in my case.”

Heroes of Envell was produced for Digital Television Russia by Parovoz Animation Studio. It’s been translated into 10 languages and is ready for life on channels, OTT and online. A special 3D version of the series will also be available via the Moolt VR interactive app.