In Formats as in Originals, is local the key to global success? — MIPCOM report

“It’s a format, it’s a competition show, a talent show. However we wanted to find some dramatic engines that will keep it very authentic and dramatic,” he continued. Three in particular: the real-life dance-company directors who act as mentors; the passion of the contestants; and the group dynamic as they work together in a team. “That created dramatic and emotional moments that the creators of the show didn’t expect to happen. It’s surprised us,” said Blecher. Connock talked about the landscape for talent shows. “How do you define talent show? We do Bake Off, which you could also say is a talent show, but wrapped up in a different way,” she said. Meanwhile Sancho stressed that the live aspect continues to be important to these formats, before the conversation moved on to factual entertainment, led by Connock, who talked about Astronauts: Toughest Job in the Universe, which started airing in the UK in September.

“Essentially it’s reality contestants that you would never ordinarily see on a reality show: we had an RAF pilot, a surgeon, a nuclear physicist… They’ve already achieved so much, but for them, the ultimate test is to go through the astronaut selection process to see if they can be the ultimate human being.”

Is that a very licensable format? “We’ve done a world map of all the astronauts across the world!” she laughed. “What made it really work was again that authenticity that everyone’s talking about. Having Commander Chris Hadfield at the helm of it, because he could relate all the challenges back to his own experiences.”

She added that factual entertainment is proving its value at having a big ratings impact, at a lower budget than the big studio shows. Sancho then led out the third section of the session, talking about a “high-volume low-cost” show recently commissioned in the UK from Phileas Productions, called Don’t Say It, Bring It, where the studio is the streets, with a roving host challenging passers-by to bring him the answers to questions.

“We were really surprised and very happy,” said Sancho, of selling a format into “such a creative market as the UK” from Spain.

Blecher talked about Keshet’s show Boom! which was a primetime show in its native Israel, but which has become more of a ‘strip’ show for broadcasters around the world. “You can make it bigger than life with a big crazy studio, or a little bit smaller… you can upscale or downscale it, but still have the dramatic engine and mechanism of the show.”

“These shows can be really fruitful,” agreed Connock, before the conversation turned to the topic of reboots. She talked about game-show The Generation Game returning in the UK. “I was in studio this week with it on Wednesday. it looks great It’s the same format but it’s been given a 21st century twist,” she said. “Families competing against each other: two teams of two… there’s a comedy sketch round, and the conveyor belt has been supersized now.”

The Weakest Link is also returning, but with less of its famous ‘mean factor’ from its original host in the UK. “It’s come back with a much more comedic tone. We’ve done it in France, we’ve done it in Finland, they’re bringing it back in the UK for a Children in Need special,” said Connock. Sancho noted that networks are taking less financial risks, but called for broadcasters to look beyond just reboots in this genre – and for producers to provide the formats to help them take that risk. “It’s our challenge to prove to the networks that they are wrong and should still go for new creative formats. That’s our challenge,” he said.

Meanwhile, Blecher said the Israeli audiences don’t like reboots: they prefer new shows and formats. “Israel is very demanding in general! But the audience is very savvy, they know TV, they watch TV from all over the world. They know even if you buy a format, that it’s out there,” he said.

“Everything is changing… We were supposed to know how millennials were going to watch TV, and now Generation Z is coming,” added Sancho, talking about the even-younger generation of viewers. “For Generation Z, 60% prefer

influencers to celebrities. If you put an influencer or Brad Pitt [on a show]they will go for the influencers!”

Sancho also talked about the need to work in a more collaborative way with other producers, following the trends in the scripted world, and suggested that the next frontier for entertainment shows will be video-streaming, and persuading services like Netflix, Amazon and Hulu to divert some of their original-content budgets away from just scripted drama.

The panel finished off by politely declining to pinpoint specific format areas for innovation. “If it’s a good idea or good content, then no matter what it is: a game show, factual… the key thing is the idea,” said Sancho. “Yes I agree, you want new, different, exciting. Something that’s just going to cut through,” said Connock. “When you recognise one and you find it, you know it,” agreed Blecher. 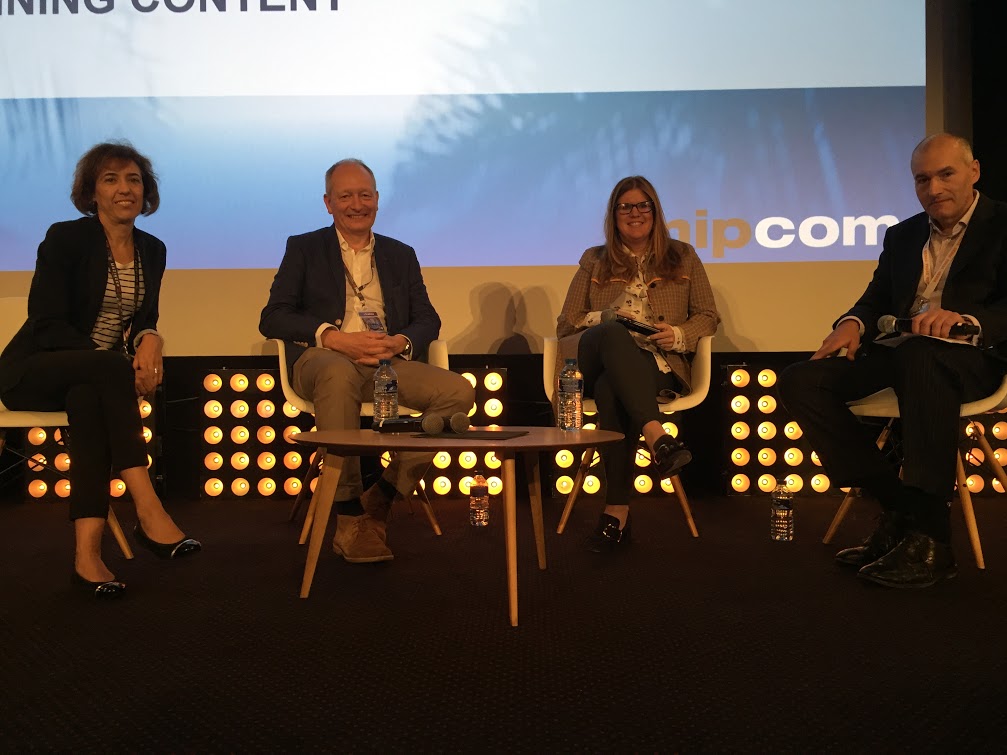 Later, we attended the session on Originals, the Quest for Brand-Defining Content.

Above, from left to right, the panel included Atresmedia’s TV director of acquisitions and sales, Mercedes Gamero; Jeff Ford, MD and SVP content development of Europe and Africa for Fox Networks Group; and CEO Katie O’Connell Marsh of Platform One Media, a Liberty Global company. It was moderated by Ampere Analysis‘ research director Guy Bisson.

To find the next big hit or brand-defining content, many broadcasters are focusing more on owning exclusive, original IP, and the ones who spoke today are excellent examples of this trend, which in many ways was sparked by the disruption of Netflix.

“Market conditions have changed from 2010 to now,” Marsh observed. “One big thing that’s happened is the emergence of independent studios. Before 2010, it was really just the major studios supplying all the content. When Netflix came into the fore, the way those deals were structured were not an attractive option for major studios.”

At the time all this was happening, Marsh herself worked at Gaumont, which created Netflix originals Hemlock Grove and Narcos. Studios “looked to companies like Gaumont because we were willing to do business with Netflix in a non-traditional way,” she said.

Fox Networks, meanwhile, got into originals because “it was harder and harder to buy good quality shows at the right price,” according to Ford. “It was a global decision to create our own content and feed our own channels,” which could be exploited over a longer term and across more platforms without licensing lag.

Originals from more nimble studios aren’t themselves the biggest sea change, however; the type of content succeeding in the international market has also changed dramatically. Much is made of how local creators “globalise” their storytelling, and Atresmedia provides one of the best case studies.

The Spanish company’s storytelling now sees its shows, like Locked Up, distributed on the UK’s Channel 4. And Spanish mini-series The Time in Between is streaming on Netflix, along with shows like Apaches.

“We have credibility and expertise, authority with our own audience in Spain,” Gamera said. “We’ve been asked to produce series that could travel well… When Netflix started to buy our shows, they clearly saw they were performing extremely well in LatAm. There were signs that our shows were also traveling very well to other countries. The goal is to keep maintaining that and trying to achieve more cross-border dramas in Spanish.”

Her statement echoes yesterday’s keynote from Movistar+’s Domingo Corral, another Spanish company going all-in on local content that resonates in the global market: A kind of soft colonisation to challenge the hit American series that long dominated so many other countries.

Primetime fiction in Spain runs for 75 minutes, not 50, so all episodes from Atresmedia must be edited for international use, according to Gamera. “The most successful series are soapy primetime dramas with a very female-driven element: Very touchy, very emotional, because maybe there’s a lack of these kinds of stories. There’s a lot of noir, thrillers, crime, action … but few really female adult-oriented drama in the rest of the world.”

Marsh also witnessed how resonant diversified drama can be on a wider scale. “When we were developing Narcos, it felt like a really small show,” she revealed, “but it was amazing. The script was great, and such an interesting story to tell. When it launched on Netflix, it was their biggest global hit. Weirdly, I think the more specificity in the script and emotion of the story, the more opportunity for global-ness.”

Touching on all this, Ford talked about the appeal of Deep State. “It boiled down to a cracking script,” he said. “If you haven’t got that on the page, you’re not going anywhere. The thing about this was, it’s become more and more timely: It’s not a boys action thriller but also a powerful family drama” with strong female characters,” he added. “It’s very intelligent, and now more in vogue. Deep State is all about working under governance. We actually greenlit this show the day Trump won the election.”

“Hillary got more votes,” Marsh cut in. “Just wanted to clarify that.”

“What a strange world it would have been had she won,” Ford mused. “We wouldn’t have done Deep State, probably.”

Wrapping up, discussion turned toward keys to success.

“When you’re doing any drama, you have to commission to be true to your brand,” Ford said. “We have lots of stakeholders but you can’t please everybody; you have to do your best to at least please your big markets.”

“For high scripted drama, partnerships are compulsory,” Gamera emphasised, pointing to an Atresmedia mini-series, based on a bestselling book, that Netflix has just pre-purchased. It was “coproduced with ZDF and Television Catalonia, and Netflix pre-buying the show. It was like a melting pot in order to really achieve the goal of having a really big, great mini-series.”

With all those chefs in the kitchen, one tip helps keep the ship on-course: “There should be one vision,” she added. “You have to respect the creator’s vision to get out of the gate.”

“If you don’t have one voice, you’ll just rip it all apart,” Ford agreed.