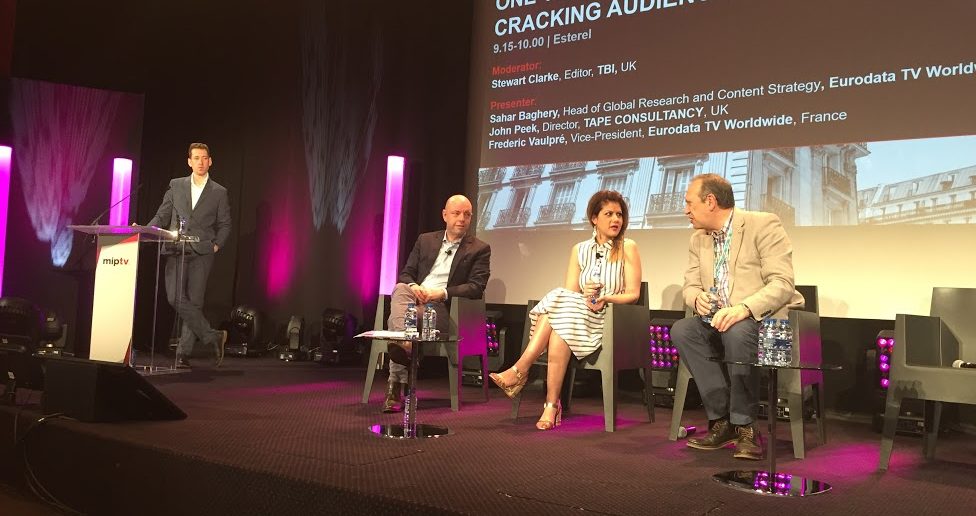 The data came from two reports: Eurodata’s NoTa (New on the Air) and One TV Year in the World.

Ready to start jogging? Because the numbers are coming fast!

Vaulpré went up to bat first. Global daily TV viewing time has shrunk, but not by much—less than three minutes for the general populace, and four minutes among young adults in 93 countries: Fiction and entertainment are the most successful genres online, and cross-screen viewing adds dramatic weight to these disparities. Factual remains competitively strong. (More on these genres later.) Here are the programmes that benefit most from online screening.

In case you can’t see them below, they are France’s Les Marseillais South America (a comedy soap opera), with 1M TV viewers, leaping to 1,4M when you include four-screen (a 40 percent viewing boost); The Netherlands’ Temptation Island, with 524K TV viewers or 645K across four screens (a 23 percent bump); and Sweden’s Homeland Season 6, 365K viewers on TV only, or 492K across four screens (35 percent more). Next, Baghery lent tips on how to be attractive across four screens, highlighting which shows are doing a particularly good job. Her advice has three components: Engagement, accessibility and content.

Cut deals with “unmissable” platforms among Millennials. The poster child here is Snapchat, which has exclusive deals with Viacom, NBCUniversal, The Walt Disney Company, and A&E. NBCU invested $500M in Snapchat’s IPO, “said to be the largest tech offering since Alibaba, valuing the company around $20 billion,” according to Baghery.

66 percent of Snapchat’s users are active monthly. The social network includes its own original programming, like Good Luck America. NBCU also created seven original shows for the platform, including a spin-off of The Tonight Show by Jimmy Fallon. ABC’s The Bachelor aftershow is on Snapchat, as is the BBC’s Planet Earth 2.

All are optimised for vertical video.

A&E and Snapchat have inked a new content partnership to launch the platform’s first-ever unscripted drama. Vice is also planning to launch originals. Onto the top performers of 2016. Scripted composed 43 percent of best-performing genres, versus entertainment at 36 percent and factual at 21 percent. (No surprise.)

But scripted is far more fragmented than it looks at first glance. Local content composes 70 percent of global totals, with ready-made imports taking up just 30 percent. Excluding adaptations and remakes, the US only represents 7 percent of the latter, with shows like The Big Bang Theory and NCIS.

Peek later observed, “It’s a sign of how the industry’s matured. We’ve always talked about the global village; now you really see that coming through … markets have matured, content they’re producing is stronger, production is better, writing is better. As a result, it’s traveling.”

He pointed to how Turkish telenovelas are traveling to South America, in some cases replacing existing local content. Empowerment, especially stories about women. (Call it #fempowerment.) These include The BBC’s Clique, a slick series about brilliant female students looking to make it in a man’s world, and Netflix’s upcoming Girlboss (shown below), the romanticised story of charismatic cult figure Sophia Amoruso, founder of NastyGal.

Another empowerment angle is the fight for justice, à la Orange is the New Black. Such shows include Lockdown (shown below), which premiered January on South Africa’s Mzansi Magic, and eOne’s Mary Kills People.

In factual, topics have often revolved around keywords like society, history, nature or wildlife, which compose about 36 percent of documentary terms.

Asked by Stewart about what this new factual programming demand means, and why we’ve departed from shows like Duck Dynasty, Peek said, “Those shows were driven by larger-than-life personalities. They worked really well, but you reach saturation. There’s more a desire to be authentic, to understand what’s going on.”

Great examples touching on this notion includes National Geographic’s Origins: The Journey of Humankind, which tackles questions like “where did we come from?” and “how did we rise?”

On the Edge, selected in the French Touch Formats Showcase at MIPFormats yesterday, appears on Planète and is upcoming. It follows a man who subjects his body to extreme survival challenges.

Then there’s Mind Over Money, airing on New Zealand’s TVNZ1. “The programme’s aim is to find the answers to common questions about people’s behavior with money,” said Baghery. “The methods are quite unconventional.”

Top traveling formats include The Voice (14 countries), Your Face Sounds Familiar (12 countries), and Got Talent (10 countries).

The volume of dating shows rose 78 percent, punctuated with shows like Belgium’s Hotel Römantiek (VIER), a kind of Best Exotic Marigold Hotel (but with challenges!), and Heart Beats from Keshet.

Tech use like augmented reality is also rising, buttressed by shows like TV Norge’s Lost in Time and Kutonen’s Tilt, a game show where celebrities face off in VR games.

On E4’s Game of Clones, people use technology access to virtually create their perfect partner … then meet the “clones” they confected.

“TV reflects society,” Peek reflected. “In factual there’s a desire to understand different cultures and communities in your own country. People want to understand what’s going on. Maybe we want to come together more than being pushed apart.”

Later that afternoon, we attended “Future of Drama: Does Data trump Creativity?”

When a rich trove of data tells platforms what users love most, does that result in creators who make more of the same—at the expense of daring new ideas? This is the question our panel faced.

To study up, Langlois revealed he asked his philosopher father about the topic. His response was this: “If one wants to please the audience, then one is not making a piece of art. Art is surprising people, not feeding them what they want.”

Lewis of Amazon Studios, which is responsible for Transparent, Mozart in the Jungle and the upcoming Jack Ryan, replied first. “Data is a tool to enhance creativity. Sometimes it’s used right, sometimes poorly. The idea of doing it to please the audience is different from trying to guess what will please the audience in the future. That’s the magic of this.”

Art is a challenge both to the creator and the medium itself, he added, referring back to Langlois’ philosophical beginning, which became a guiding theme throughout. “If you’re an artist, you have something you want people to feel. That’s all we try to use [data]for—what do people want to watch in a year or two?”

“We can make great shows without data,” Santoianni—whose production company credits include Mr. Mercedes and The Son—added. “It’s about the creator’s vision from the moment they walk in the door. What’s the show they want to make? What’s their vision? At Sonar, we support that. We give them the place to make what they want.”

That isn’t to say there is no place for data; rather, it comes into play after the show is in the can, when preparing a marketing plan, Santoianni said. “How are you gonna position it within the marketplace? If you let data hinder the creative process, you can go down a rabbit hole that isn’t what your creator intended to make when they first signed on.”

Barfoed, whose credits include Those Who Kill and Below the Surface (for which he’s also the showrunner), was asked by Langlois whether data ever influencers his creative work.

“A lot of numbers float around,” he replief. “Each broadcast might have a different viewership and opinions about their audience. I’m not afraid of it; it’s human research. Who am I talking to, who’s listening? I think there’s a bad way to use it, but I don’t think it’s a problem to ask yourself questions, and ask audience questions, before getting started.”

He compared the process to how the screening of an idea might occur before a movie is made. Data should be used to “give yourself a framework to work within, but not to design the project,” Barfoed said.

Langlois observed that Amazon lets people vote on pilots, allegedly to determine which shows should air or not. He asked whether Amazon really complies with that process.

“The definition of vote in this case isn’t ‘I choose this, I don’t choose this,'” Lewis replied. “It’s not a binary choice.” What people say they like and what they watch can often be very different, and you can’t always tell by a pilot’s success.

Transparent wasn’t the most-viewed pilot when it came out, he revealed, but it has an incredibly high completion and rewatch rate, not to mention acclaimed feedback.

“There are a lot of ways to get people to watch the first minute or first episode,” said Lewis. “What’s hard is to get them to watch to the last episode. I truly believe the best show will have the highest completion rate because people want to know what’ll happen next.”

Lewis is also incredulous about that some companies can use data to determine the story they can tell, or even actors to use. “It is a fantasy,” he said. “There’s a hyper efficient system like that, but it doesn’t exist in economics; that’s why you have the market. It doesn’t exist in art; that’s why you have comparison … when you’re buying projects, you have no idea. You’re listening to your gut: This is something I would watch, my audience would watch.”

Later, in what seemed like an apt addition to those thoughts from a creator, Barfoed said, “When I’m writing, I’m just writing what I feel. I’m writing from my stomach.”