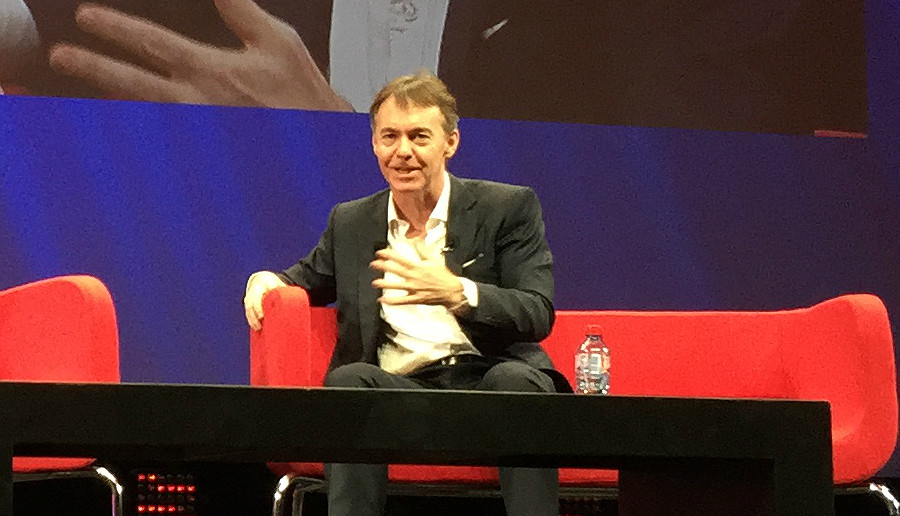 Group CEO of Sky talks consolidation, digital opportunities and the next steps for the European broadcaster.
By Stuart Dredge on April 13, 2015 0 Comments

Last year, Sky became one of Europe’s leading investors in original content through the acquisition of Sky Italia and Sky Deutschland, with a combined programme spend of £4.6bn/€6.4bn. Jeremy Darroch emerged from that consolidation as group CEO of Sky, with his MIPTV keynote today the first time he’s spoken at an international event since the acquisitions. He was interviewed on-stage by former BBC1 controller Lorraine Heggessey, who is now chair of the Grierson Trust.

“All my career’s been in consumer-facing businesses, where customers and consumer insight has been at the heart of what we’ve done,” he said. “Sky is no different… our role is to develop very deep insights into what our customers want… and then to think about how we start to construct a service.” The direct customer relationship continues to fascinate him, he added. So what does the customer want?

“More great content,” he said. “There’s never been a better time to be in the industry that we’re in. The demand from customers for great content seems to be insatiable… They want to have access to that, as we know, on their terms. They want the whole experience of watching television to be better.” But on their own terms in terms of how and when they watch it.

Is Sky as much a technology company as a broadcaster? “Innovation in the viewing experience has always been at the heart of what we’ve done as a business,” he said, right back to when it launched its first satellite service. “We can think of innovations like Sky+, high-definition, 3D, Sky on the Go. All of these things have been synonymous with Sky as a business… It’s a core part really of what we think our brand stands for and a core part of what our customers expect from Sky.”

Darroch added that Sky has been “built on change” in its industry and the markets in which it operates in. “This whole idea that we constantly seek to renew ourselves,” he said. “You get a very dynamic culture: a culture that’s restless really, and constantly wants to move on and try new things.”

He talked consolidation with the recent acquisitions of the Italian and German Sky broadcasters. “By bringing the Skys together we could really in each of the markets step-change again in what we do. At the heart of that would be doing a better job for customers,” he said. “We’d be able to do things at a great pace and often to raise our level of investment right across our customer service… We’re in 21m homes today, but something like 60m homes in the territories we’re in aren’t yet paying for TV.”

How will it change the way Darroch runs the business? “I’m working much more across the businesses. Much more working on the business, and less in the business,” he said. “What that’s created is the opportunity for others to step up and move into some of those old roles. We’ve got a load of very talented people around the Skys… We’re just really getting into and learning about that process of change. This is not about spinning on a sixpence or throwing all the cards in the air. It’s about starting to move through that at the right pace.”

He talked about the explosion in technology and new distribution platforms, which is allowing Sky to get to customers it couldn’t reach before. “It’s a very exciting time for everybody here, and it’s a very exciting time if you’re in Sky.” He also talked about Sky’s UK business: “If anything, it’s accelerating,” said Darroch. “The UK business was in good shape. At the heart of that has really been a journey we’ve been on in the last few years to broaden out our business.”

He added that Sky’s businesses in Germany and Italy are performing well and putting out good shows, and broadening their distribution base as the UK has. He admitted that Germany is a nascent business, but that it is driving subscribers well by investing in content. “They’re growing well, a small team in Germany but they’re doing a good job,” he said. The businesses are learning from one another too: there are more ideas coming through. “The interesting thing about the big ideas: people often think they flow from the UK to Italy and Germany, but in many cases it’s the other way,” he said. “These’ll form much of the drivers of our growth over the course of the next few years.”

Sky has been synonymous with Rupert Murdoch, but how involved is he in the business now? “Fox are obviously our biggest shareholder, and incredibly supportive of us as a business, and continue to be so,” he said. “But they let us get on, as you’d expect, with the job… It’s our job to communicate and engage with all of our shareholders. One of the great things we’ve seen over the last year is we’ve had very strong support for the journey we’re on. Pretty much all our shareholder base have bought into it… Fox were a very important part of that.”

Will there be more acquisitions in the future? “I don’t see any reason why not [but]we’ve got plenty on our plate for now and we’re focused on that,” Darroch said. But if that’s successful, it will explore where else it can expand. “We have an appetite in our business to invest… There’s lots of good ideas that will come up, and we’ll get after them.”

Darroch added that Sky is working hard on building its entertainment business, including through acquisitions and commissioning, including original productions. “Very much so, that’s our intention. And that will sit alongside continuing to acquire a huge amount of content from whatever in the world. Our own commissions give us a little bit more flexibility around what we do,” he said.

Is it crucial to have this to differentiate the company, wondered Heggessey. “I don’t think it’s the only way, but it’s certainly one way, and it can sit alongside lots of other things that we do,” he said. “It can complement either what we do with others or what we do elsewhere in terms of the customer experience.”

Darroch delivered a message to the creative community. “We want to particularly with our own commissions take a bold step… We’re very willing to take risks. We’ve always been a business that’s willing to take risks within the framework that we’re trying to achieve,” he said. “It seems to me that if you work with the very best people, you want to give them a lot of freedom to do their best work… We’re very much open for ideas.”

He also talked about sport: how will Sky’s increasing investment in English Premier League rights square with wanting to spend more on original content, for example? “It’s not an either/or,” he said. “You don’t start building a broader content business by losing sight of your heartland… That week we renewed the Premier League, we brought the British Open golf tournament to Sky Sports as well.” So Sky is not letting more expensive football rights prevent it from looking for new opportunities elsewhere too.

How does Sky decide whether its investment in original content is paying off? It looks at consumption, obviously, and at what customers are telling it about its shows – including resonance with new customers versus existing customers. “And of course we look at reaction from the creative community,” he said. “We try to take quite a broad view of how we assess content… we’re not particularly driven by any one metric.”

Other broadcasters are buying up production companies, so will Sky be joining that trend more enthusiastically than it has done so far? “I don’t think it’s imperative, not particularly. We will make a few more investments, largely driven by Sky Vision, our distribution arm,” he said. “It’s something I’m open-minded to… we want to be very flexible and agile and work across the industry.”

Can Sky still be a disrupter, when it faces the likes of BT, Netflix and Amazon competing with it for sports rights and content. “It’s very much about getting broader,” he said. “How do we get to as many customers as possible?” Whether that comes through its own satellite service, through wholesale deals with others and through selling its content.

“We’ll always be a business that will be single-mindedly driven by customers,” he added. “And culturally by constantly renewing yourself. People often say ‘you’re the incumbent now’. I reject that… We don’t really worry too much about those kind of guys, we just stay focused on what we’re doing.”

So what’s the next big innovation for Sky? “I think you’ll see lots of innovations in terms of the home entertainment experience and the viewing experience,” he said. “The core of our business still today is families going home and having a brilliant experience… I think you should expect to see news that will come through with that.”

But also trying new things: “We’ve got lots of plans to innovate over-the-top in our new services like Sky Now and Sky Mobile. The future is less about any one single idea than about our ability to do multiple things to really span the whole of the markets in which we compete and operate.”