1001 Rooms by Dolinsekfilms takes the grand prize!
By Angela Natividad on April 12, 2015 0 Comments

MIPBlog spoke to the winners of the MIPFormats International Pitch, supported by partner all3media International, after winning their 2015 prize. Dolinsekfilms in Austria won the grand prize for 1001 Rooms, in which a candidate is abandoned at the center of an array consisting of 1001 rooms. His mission is to fight his way out of the cluster to reach the edge and the best rewards.

Co-presented by CEO Michael Dolinsek and producer David Visnjic, the tasks in 1001 Rooms are given by the faceless Matrix Master, who loves riddles, and dishes out both physical and mental challenges.

Dolinsekfilm wins a €5,000 cash prize, plus a value package of €15,000 for development of the pitched idea, from MIPFormats International Pitch exclusive global partner all3media International. 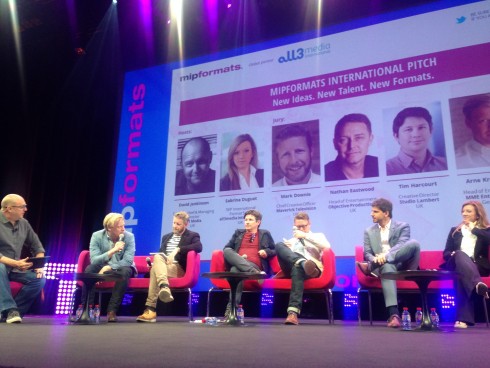 “There was a lot here—like game shows that work very well, but we were also looking at the ability to scale internationally,” said Duguet of all3media.

The other projects in the running included God’s House by Haas Productions, Project Party Villa by Prize Pig Productions, Welcome Home! by indy TV show creator Jean-François Grenier, and Who Will You Trust? by StudioVision.