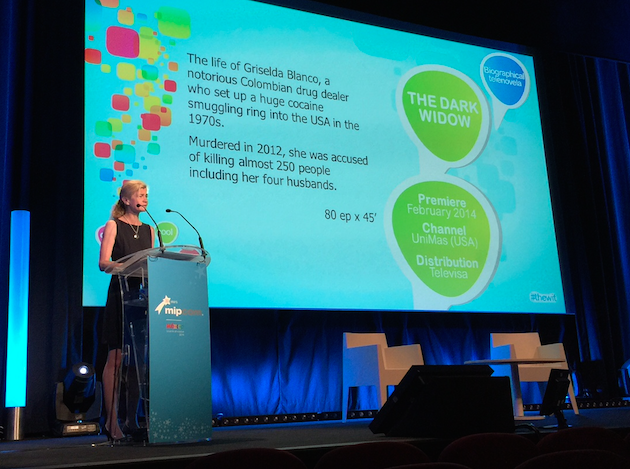 The Wit's Virginia Mouseler shows off the hottest Mexican scripted shows for the year ahead.
By Stuart Dredge on October 13, 2014 0 Comments

Mexico is this year’s country of honour at MIPCOM, so expect a flurry of activity from Mexican producers and broadcasters during the market, as they show off their wares from one of the world’s most vibrant TV markets.

An early primer was provided this morning in the Fresh TV from Mexico session, where The Wit‘s Virginia Mouseler gave a sparky run-through of Mexican scripted shows that haven’t yet aired. Here are the highlights, with details of distributors and/or producers in brackets, if you want to explore further during MIPCOM:

The Dark Widow (Televisa / Caracol)
A biographical ‘narco-telenovela’ telling the tale of notorious Colombian drug dealer Griselda Blanco – “a powerful and beautiful woman” – who set up a huge cocaine smuggling ring into the US in the 1970s. By the time of her death in 2012, she was accused of killing 250 people, including her four husbands.

Woman Of Steel (Telemundo International)
Another narco-telenovela about a woman called Sara, whose husband is murdered on the day of her wedding after robbing $3m from a drug lord. What else can she do but take his place? The 70-episode show tracks her rise to power in the drug-trafficking world. “Money, beauty, power… maybe it’s the recipe for a narco-telenovela from Mexico!” said Mouseler.

Miss Gunpowder (SPTI)
Another “beautiful young woman” – albeit much more innocent than the heroines of the previous two shows – who falls in love with a man who belongs to one of Mexico’s most powerful drug cartels. Her descent into the world of crime is told by a journalist who’s in love with her. Based on the first two shows, we’d advise him against becoming her husband…

Las Bravo (Comarex)
Las Bravo is an adaptation of a Chilean format: the story of Valentina Bravo, who after her husband dies – there’s definitely a theme here – discovers he led a “double life full of excesses and shady dealings”. The only thing he’s left his wife and three daughters is “huge debts and a strip club for women”. So, naturally, they take it over…

Street’s Virgin (Televisa International)
A new version of a previous telenovela called Juana la Virgen, which started in Venezuela 10 years ago: “A young virgin woman gets pregnant by a married man due to artificial insemination due to a hospital error,” explained Mouseler. “And that gives birth to a great love story.”

UEPA: Un Escenario Para El Amor (Comarex)
A young woman takes a job as a dancer in a bar to pay for her sister’s boarding school, while telling her that she’s a “prestigious psychologist”.

The Captain (Fox Internaional Channels Content Sales)
This is a biographical drama about Carlos Camacho Espiritu: a man from humble origins who established a famous zoo in Mexico in the 1970s.

Gofer (Canal 22 International Sales)
This was the first Mexican film to be made available online for free in 2012, and has been described as the “Mexican House of Cards”. It’s set in the political world of Mexico with Alan, who works as a driver and assistant to a manipulative politician, cleaning up after his misdeeds.

Burn the Bridge (Argos Media)
This historical drama focuses on the civil war in San Salvador in 1989, when Jesuit priest Ignacio Ellacuría and five colleagues are murdered by the Salvadorian Army at the American University of San Salvador. The show shows how the murders increased international pressure on the Salvadorian government to settle for peace.

Los Miserables (Telemundo International)
This is a modern-day version of Victor Hugo’s classic novel, but transplanting the action to Texas, where a young Mexican woman has been jailed for 11 years for a murder that she didn’t commit, and tries to escape justice and prove her innocence.