Is digital coming of age for the television industry? That was one of the starting points for a session this morning at MIPCOM, exploring the brave (and terrifying) new world of digital distribution.

Packer was first to be grilled on-stage about his views, as the executive responsible for Lionsgate’s TV distribution business. He noted that Lionsgate tracks 12 or 13 rights now for its 15,000 titles. “Everybody talks a lot about all this great TV content that’s being created, but the other part of it is the distribution models are exploding, which is fun for me.”

He added that Lionsgate tries to experiment lots, succeeding or failing quickly, and learning from both outcomes, then gave some examples from Lionsgate’s movie distribution business. “The windows are changing, they’re not all the same. We take each movie and think about the audience: whether its an ownership audience or a rental audience,” he said.

Some examples: Now You See Me’s extended edition, which was not available on VOD services: “The only way to get it was to buy it,” he said. Empire State, on the other hand, was a direct-to-video title starring The Rock that was sold like a feature film, with a “VOD Early” release.

Another film, Mud, was originally planned as a limited cinema release then moving to VOD, but when it did better than expected in cinemas, it was switched to an ownership model for the digital release. “When you start to get to the $10m, $15m, $20m box office level, people are making a statement that they’d like to own the title,” he said.

He moved on to TV, which he said is starting to follow the same pattern. Lionsgate has shows with Netflix (Orange is the New Black) and Hulu (Deadbeat), as well as network shows. The former is being distributed across the world now, with different strategies for different markets.

“You make a judgement call on each territory. We have some territories whee we can sell it as pay TV, and some where we have to take a different approach,” he said, citing China as one example.

“Normally we hold back shows in China for six months. In this situation I said why are we gonna do that, it just gives them (the pirates) six months to get the shows up. Why don’t we just go in there?” And the show was made available in China on a “next-day” basis. “Sure enough, piracy went down,” he said.

Closer to home, Lionsgate is trying to understand when people watch its shows more. “One of the big parts of our job now, in terms of analysing the hit, is really looking at the DVR. A show like Nashville can come in with 40%-60% of its viewers watching “+3 or +7” according to Packer. “Hey, we beat CSI!” he said.

Packer said he’s not worried that the likes of Netflix and Amazon will “shoot their bolt” (in Bulkley’s words) when it comes to commissioning. Could the money dry up? He gave an emphatic “No” in response.

“If anything I’m looking for the local players to get more active, they’ll start to do their own SVOD services,” he said. “They’re not going to let other services coming in from over-the-top without a fight.” Examples: BSkyB in the UK, Comcast in the US, about whom he said this: “They’ve seen what’s going on, and they’ve slowly morphed to offering more on-demand to the customers who are spending $120 a month,” he said.

Packer also talked about the impact that platforms like Netflix and the binge-viewing habits of their subscribers is having on Lionsgate’s productions – and also on how it distributes them around the world.

“Each of these platforms has not only their own brand, but their own DNA on how their viewers like to engage with content, so the shows are reflecting that,” he said. “And the binge-viewing is a factor, and that’s where you see a lot of carried-on storylines… It’s changed the way we distribute too: they never want to have a season out of licence. We’ve had to transform a lot how we sell, because they don’t want to have season one go out of licence, and all of a sudden somebody signs up to the service and can’t watch that season.” 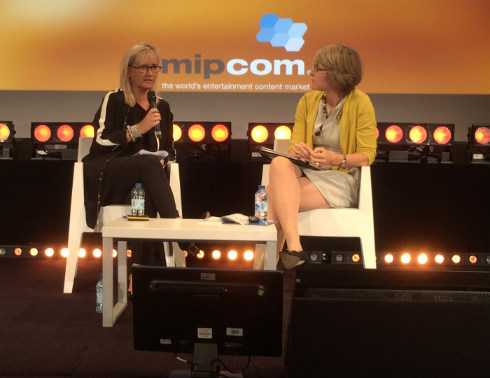 Over to Discovery’s Dee Forbes, who talked about changing strategies for her company, particularly in Europe where pay TV hasn’t grown in some countries (e.g. Italy and Spain) like it has in others (the UK). Discovery has thus found itself playing in the free-to-air space in the former countries, moving out from its pay TV roots.

Discovery has been acquiring broadcasters and stakes in broadcasters: “In the world we’re in, we need to be bigger,” she said, before moving on to the company’s moves into “global live events” like Nik Wallenda Live, a daring tightrope walk across the Grand Canyon in the US.

What if he’d fallen? “It was absolutely live,” said Forbes. “Basically Nik was prepared to die. His father died walking the tightrope, it’s in his blood.” There were 1.4m tweets around the show, and Discovery sees it as a prime example of a live event that could go around the world, and spark huge online conversation. Another example: Oprah Winfrey’s interview with cyclist Lance Armstrong.

Discovery now has a team in London creating a new pipeline of content to complement the shows coming from the US. Naked and Marooned with Ed Stafford is one example: originally conceived as a UK show, it was broadcast in other markets too, attracting 15m viewers across Europe.

“Typically we have shorter windows within Europe, and we’re getting closer to the US too. But it’s not like the movie business: we don’t have to be day and date,” said Forbes.

Bulkley asked about how Discovery sees VOD, SVOD and services like Netflix. “VOD is a fact of life now,” said Forbes. “Our approach is very simple: we work with the oprators, and as they want to get into this market, we work with them… VOD, SVOD, catch-up is here to stay, and it’s up to us to figure out the models that work best with our partners.”

Would Discovery launch its own SVOD service if alternatives weren’t available, or even if they were? “It’s a very big investment, but could it happen? Quite possibly,” she said.

Discovery is also looking to YouTube for some of its new stars, including make-up channel Pixiwoo, whose founders are getting their own show on Discovery soon. “We’re really seeing it as a place for great talent-scouting: it’s about putting yourself out there and seeing what you get,” said Forbes. 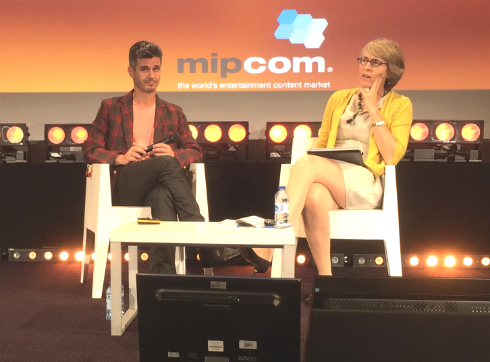 Finally, Pivot’s Evan Shapiro talked about his network, which was born out of the studio Participant Media. He started by talking about what he sees as two key misperceptions about Pivot’s target audience of young millennials.

Pivot, which is in 43m cable and satellite homes in the US already, aims to “respect” that audience, with Shapiro suggesting existing networks have lost that quality. Even MTV? “There are times when MTV does respect their audience, and there are times when they don’t,” he said.

“There’s not a binary way that television is going to be made or consumed or appreciated,” he said. “The way we’re doing it is pluralistic.” Including an app that cable providers can sell to their customers, providing access to its content. And he also took aim at suggestions that Pivot’s key demographic are increasingly cutting the cords to these cable providers. “They’re not cord-cutters. Every person under 30 has a cord: it’s a broadband cord.”

Shapiro also talked about “sometimes exploitative” reality shows. “If you want to look at the difference between MTV and Pivot, look at Jersey Shore and Jersey Strong,” he said. “It’s a beautifully-made documentary series ported into the format of a reality show.”

What happens as the millennials watching Pivot grow up? Will they stay with the network, or move on – and if they move on, will Pivot be launching another brand for them to migrate to?

“I think some will move on, and some won’t. We like to say we’re not a lifestyle brand, we’re a life-stage brand,” said Shapiro. “We want to build a flycatcher for this generation as they age in and age out. But we have great ambitions too: of launching another network, like what MTV and VH1 were originally intended to do.”