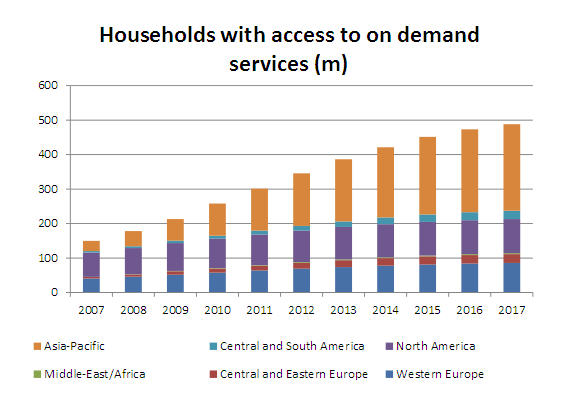 What will the online and pay TV on-demand landscape look like by 2017? IHS Screen Digest gives us the big picture.
By Joanna Kirk on May 13, 2013 0 Comments

The past decade has seen the video-on-demand landscape change considerably with the arrival of newer technologies such as true streaming VoD, now steadily replacing nVoD. Satellite operators have reacted to an increasingly competitive market, launching DVR-based and broadband-delivered VoD services, allowing them to compete more effectively with cable and IPTV. Competition is not only coming from within the pay TV space though. As IHS Screen Digest says in this exclusive white-paper, “over-the-top services are starting to pose a threat to the pay TV model, although the threat remains nascent, for now“.

Some of the key facts and figures in this review:

– At year-end 2012, less than 350 million households globally were enabled to access on-demand services via their pay TV service (via DVR-based or streaming VoD solutions). By 2017, this number is forecast to increase to nearly 500 million households.

– IHS also estimates that pay TV consumtion has seen a ten fold increase between 2005 and 2012, with approximately 22bn on-demand content views globally in 2012 via pay TV VoD services, forecast to exceed 40bn in 2016. Pay TV VoD revenues are expected to exceed $8bn globally by 2017, growing at an annual rate of 15 per cent.

– Broadband penetration growth is expanding the reach of online VoD services. IHS estimates there were nearly 180m active connected devices in Western Europe and North America in 2012 – this is forecast to grow to nearly 500m by year-end 2016.

IHS Screen Digest is the largest media-focused research firm in the world with more than 50 analysts covering over 65 global territories.