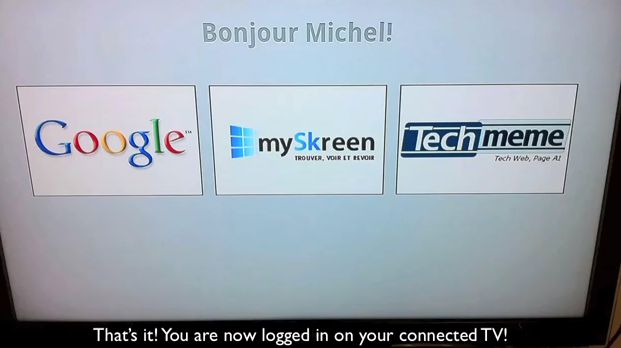 For Joshfire's Giannini, organiser of a TV-focused hack day this weekend, developers can change TV's future...
By James Martin on October 19, 2012 0 Comments

Photo: The Connected Couch, a hack from Joshfire’s last hack day, detects your smartphone when you sit down & logs you in to your connected TV account

The same way phones have been revolutionised since they first connected to the web,  a revolution is currently happening to television: it is now opening itself up to the creativity of developers, interconnected with our other devices. TV is not an unidirectional channel anymore: it has become interactive.

During ‘Hackathons‘, teams of hackers — i.e. developers — gather to invent new ways to use technology to interact with and consume content. Their goal is to find brilliant solutions to today’s problems. Today, few domains are as rich in potential for hacking than TV.

The original English meaning of the word “hack” reflected an urgency in creating something — minimal and crude, but clever — to solve a problem of the moment. This original meaning has been lost somewhere along the way, to be associated with piracy. During hack days, or hackathons, the goal is to reclaim this original meaning of hackers as makers, coders and inventors who come together to build something new, ruthless and brilliant.

At MIPCube 2012, we saw the first TV Hack Day: a yacht hosted 12 developers who worked for 48 hours to create disruptive prototypes. Some incredible creations were born of the event (see below); but the hackers’ work also revealed TV’s limits for hacking compared with other industries. As developer Syd Lawrence put it bluntly on presenting his MIPCube hacks: “TV data is shit.” In other words, programming schedules and other data developers could play with are not yet open and accessible enough to allow for truly amazing hacks.

To keep the movement going, we decided to launch HackDayParis: Connected TV. This event will take place in the former Paris Stock Exchange this weekend (October 20-21). As you would have imagined, the event is centered around the universe of the television but participants are free to use whatever tools they want.

This time, around 100 developers, designers and other creators will join together to put a new definition on TV, and compete for a €1000 grand prize.

Here are some outstanding hacks from previous events. HackDayParis: Connected TV should come up with some equally mind-blowing creations!

Grab images snapshots from the TV, that arrive directly to the user’s smartphone. This may be used to share and comment on social networks what’s is happening on TV. It’s well established that adding images helps a lot in communicating emotions.

A team created a tool to make a music video in three single steps. The user starts by uploading a song, then selects some pictures and YouTube videos available online that would fit the song, and presses “generate”. A video clip synchronised with the rhythm of the music is instantly generated and played fullscreen.

Hacking the TV is not limited to software. Hackers connected a regular couch to the internet to invent new interactions with the television. The couch detects who is sitting on it based on RFID technologies (the user wears a tag or uses his smartphone in his poket). Then, it sends a signal to the television which adapts its content depending on the people in front of it: a selection of suggested movies based on your favorites, restart a movie you started from another device…

Joshfire/ParisHackDay are partners of MIPCube’s TV Hack Day. More on the 2013 edition soon!