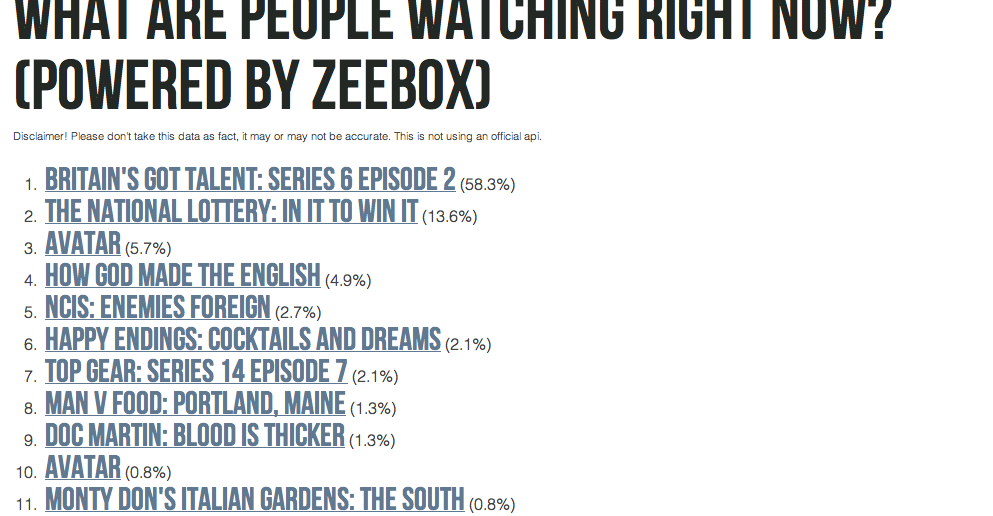 12 developers, 36 hours, one mission: disruption in television.
By Angela Natividad on March 31, 2012 9 Comments

Over the course of MIPCube, a yacht named Mojito hosted 12 developers at work on hacking the future of television. This was a giant experiment for MIPCube: to see if hackers could produce what may very well be the next big thing in social TV/second screen … in 48 hours, with help from the kindly hacktivists of Rewired State.

The developers created 12 prototypes in total, of which 10 are now online and working. Each represents a different opportunity for the future of TV and can be seen on the Rewired State website.

The winner will be announced tonight and will be selected by a panel of three judges:

Here are the projects, presented early this evening at MIPCube.

Grab Magic provides the ability to grab images from your TV and instantly sync them to your phone. Magic!

“Sometimes the best UI is no UI,” said Balkan, a user interface designer by trade. “That’s what great design can do: take great technology and make it invisible. I call this the Superman effect.”

When?! lets you enter the name of a TV show and it’ll alert you when it starts again. Also includes option to SMS the start date to yourself!

“When you’re building hacks you should think of solving a problem that’s particular to you.” Idea of scratching an itch. This particular itch wasn’t his own; it was his girlfriend’s.

Originally positioned to be a “TV Guide for text”, the hackers approached this project as a simple solution that doesn’t exist and should.

However, they quickly discovered why it doesn’t exist: the data provided online by content owners regarding shows, seasons, episodes, dates and times is completely inconsistent and incoherent. For this reason, NudgeMe couldn’t be presented in a working state.

Syd Lawrence called upon producers to remedy this problem. “The concepts we’ve got. The actual data and being able to make something real, we can’t do.”

VOD Do You Vant to Vatch – Syd Lawrence

Run a search for stuff you want to watch; this simple app shows you where you can find those shows, whether on iPlayer or YouTube.

Powered by Zeebox, this equally simple app simply shows you what people are watching in real-time.

Want to know what film to watch? Enter a film you like, it’ll recommend similar fims. Typing in Superbad recommends Get Him to the Greek, The 40 year old Virgin, Pineapple Express, and Wayne’s World, for example.

For your information, all Syd’s hacks from this last 48 hours are available at syddev.com (with the exception of NudgeMe).

Another great app inspired by a significant other. When David’s wife watches TV, she doesn’t want to multitask on Twitter or Facebook, but she may occasionally get inspired to go shopping. The service, which syncs your TV to your mobile device, lets users collect data from shows that they can then use as shopping lists.

“Once she hits an area of content that has been populated with keywords, her second screen receives the information enabling her to buy,” Williamson explained. As an example, a dish from a cooking appeared on TV; the mobile device quickly reflected all the ingredients needed for the dish.

The aim is for brands to see who’s most influential about a show on the social Web. “When you play a clip in the system, it’ll stream all the tweets about it and draw you a graph,” explained Smith, who showed us how it worked in real-time.

“The app gives people a way to constantly rate what they watch as its going on” whether live, via YouTube, or on TV.

An iPad app has already been built. You take a show or a clip and are able to see how people rated it over time as well as messages they left in different parts of the clip. You can rate and comment on sections, too.

“This app is for enhancing experiences for deaf people,” explained Lyons.

The app finds words like “boom” or “ring” in a show or film; your phone vibrates to match the effect. When a telephone rings on-screen, yours rings too!

“This is something I’ve thought of for awhile that I just assumed existed. But it doesn’t,” Job prefaced.

Data collected when watching online videos is not granular enough when watching. The trick is to listen for ignored events to collect richer data. Typical “events” recorded by video players include buffering, skipping, pausing, or page load/unload.

But what Feedback seeks to do is record more crucial events: when someone skips ahead of a certain part of a show, that should be recorded. And if someone stops watching the show and leaves at some point, that departure point should also be collected.

A working prototype couldn’t be developed today, but Job offered to show it to those interested tomorrow if they wish.

Emma Mulqueeny, founder of Rewired State, added, “Hacking alongside all of the incredible people attending and speaking at MIPCube has offered a unique opportunity for developers and industry heroes to collaborate and get excited about building the products of the future – and for us this is the true purpose of hack events, rapid prototyping and R&D. How else can you really imagine the reality of the future?”