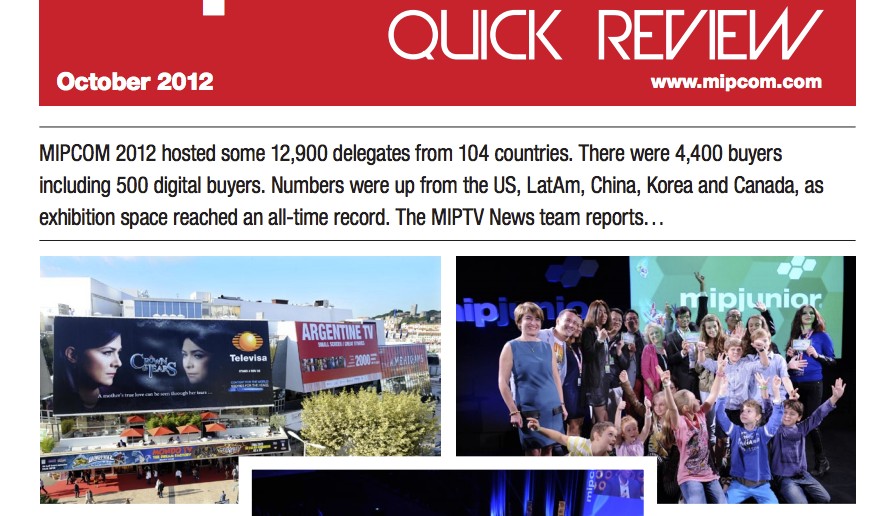 The market saw scores of distribution, format and co-production deals being done across all genres, says the MIPCOM Quick Review
By James Martin on October 22, 2012 0 Comments

MIPCOM 2012 was a busy market, which saw scores of distribution, format and co-production deals being done across all genres, by buyers and sellers from every corner of the world.

NBC Universal’s Defiance went to Shaw Media Canada, Lionsgate’s Nashville licensed to Channel 4 UK and FremantleMedia Enterprise’s US cable series The Wedding Band was picked up by Sony and Viacom18, two separate deals that will take the show into 45 countries.

HBO Nordic, meanwhile, has secured exclusive TV and SVOD rights for a package of Starz Media titles including Magic City.

Other genres had similar success. Deals done by Endemol Worldwide Distribution included The Steve Harvey Show to MNet in Africa, Howzat! Kerry Packer’s War to BBC4 in the UK and Extreme Makeover: Home Edition to Ukraine.

Deals came in all shape and sizes. At the larger end of the scale, Prime Entertainment Group sold packages to Nigeria’s Silverbirdgroup, Ukranian TV, Kazakh Prime Media and Digiturk.

Smaller but no less significant was MIPCOM newcomer KSM’s sale of two 3D documentaries to UFB Media in China. GRB Entertainment also had success in Asia, selling Police Women Of Cincinnati & Broward County to Fox International Channels-Asia and Animal Hoarding and On The Case to AETN Asia. Still in Asia-Pacific, GRB has sold Princes Of Malibu to NTV Japan.

The rising demand for content means leading distributors are also doing deals to increase the range and diversity of their catalogues. Cineflix Rights did this by agreeing to represent 450 hours of programming from US producer LMNO. Passion Distribution did something similar, adding dozens of titles from Weather Channel and Gameshow Network in the US.

This is an extract from the MIPCOM Quick Review, the official executive summary of key events at MIPCOM & MIPJunior 2012. You can find it, as well as all of the markets’ official publications, here. All we ask is your email (if you haven’t provided it recently already!)