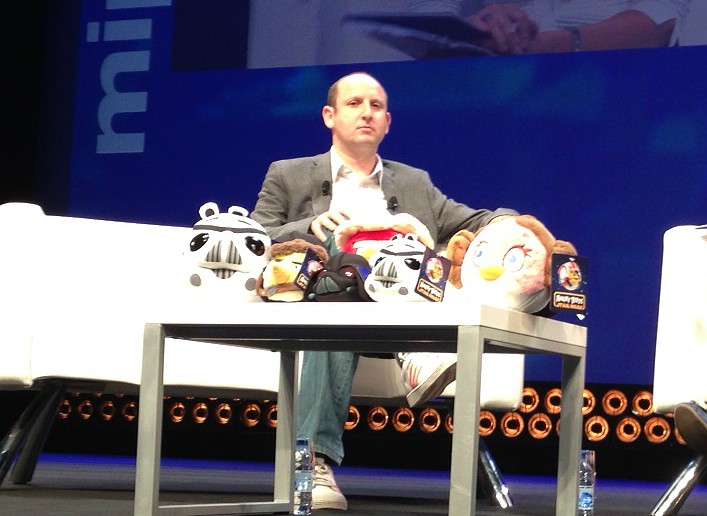 Just when you think the Angry Birds phenomenon can’t surprise us any more, Rovio pulls something else out of its feathery bag of tricks. This week, the Finnish company unveiled a new partnership with Star Wars involving a new mobile game, merchandise and board games.

This, on the back of partnerships in the last year with NASA and National Geographic for the Angry Birds Space game, and the recent milestone of 1bn downloads for the entire Angry Birds series. Not to mention the company’s plans – announced at MIPTV earlier in 2012 – for a series of Angry Birds animated shorts.

Today at MIPCOM, Rovio’s EVP of strategic partnerships Andrew Stalbow took a Media Mastermind keynote slot to talk about all of the above, and how Rovio can work more with the television industry.

“Our goal really is to make sure that the business model is relevant for the appropriate platform. Whether we’re on a smart TV, a Roku box, an iPhone, an Android device, we just want to make sure our games and apps are accessible to a wide audience,” said Stalbow.

He was asked about the Star Wars deal by moderator Kate Bulkley. “About a year ago we were being approached by many different entertainment companies about partnerships,” he said. “We had all these amazing opportunities to partner up with people… We took a step back as an organisation and thought which brand would we really like Angry Birds to partner with… Collectively, we’re all massive Star Wars fans at the company.”

The game launches on 8 November, but Rovio is treating it “as an entertainment franchise… the game will launch, we have some animation, and some amazing partnerships with consumer product companies“. Eight or nine teaser videos are being released between this week and launch day.

Rovio worked closely with LucasFilm on the project, including a story arc within the game and animation. “We really take some of the amazing qualities of the Star Wars movie and bring them into this new world that we’ve created,” said Stalbow.

“It was a very natural fit for the two properties,” he continued. “Just like in Angry Birds you have the birds and the enemies, who are the pigs, and it’s the same in Star Wars.”

Merchandising is a big part of Rovio’s business now – in 2011 its total revenues were just over $100m, and the company sold 25m plush toys that year. “We always try to just do the right things by the fans and come up with really fab products that can come out at the same time as the game, just like a big movie release would do.”

Stalbow said Rovio likes having multiple revenue streams in its business. “It’s all about putting the fans and the brand first, and if we do that, it’s a great opportunity to build ancillary revenue streams as well.”

Rovio recently released Bad Piggies, a new game set in the world of Angry Birds, but focused on the pig characters. “A really nice way to start building a new franchise by extending something out of our core game. And you’ll see a lot of focus from us in the next year on expanding the Bad Piggies franchise.”

How does the company respond to suggestions that it’s a one-hit company? It’s only non-Angry Birds game, Amazing Alex, hasn’t been an enormous success.

“I think you’ll see lots of interesting IP coming from us,” said Stalbow. “When we look at our brands, we’re looking at some incredible other brands out there and learning from what they’ve done. If you look at how Hello Kitty has evolved, or Super Mario… It’s about trying to have an impact on pop culture. We take a long-term view of our business, and that leads nicely into how we’re looking at video.”

Stalbow first met Rovio when he was working at 20th Century Fox, striking a deal to make the branded Angry Birds Rio game, based on Fox’s animated film Rio.

“Hollywood has seen the success that Angry Birds has had, and Hollywood is hot for our brand, and hot for working with us on many different levels,” he said.

Rovio has also started thinking about animated shorts as less a promotional thing for the Angry Birds games, and more a revenue stream in its own right – cue those plans for a series of 52 shorts, created in-house by an animation studio acquired by Rovio.

“We’ve now got 80 animators based out of Helsinki, we’ve got partnerships around the world… and for us, the 52 animated shorts is just the start of our video business.”

The brand name appears to be Angry Birds Toons, by the way – not something that’s been announced before, as far as we’re aware. “It’s a working logo for us at the moment,” clarified Stalbow.

Who’s going to take the shorts? “We’re in discussions with various different broadcast partners,” said Stalbow. “We were blown away by the level of interest. There’s so many fans of Angry Birds in the television industry… But we haven’t got any announcements just yet.”

What about an Angry Birds movie? That’s been rumoured for some time, but is that on the agenda still? “For us, the shortform series is just the start of our plans in animation,” said Stalbow, playing a straight bat. “Because of the success we’ve had with the brand, the reach we’ve had on connected device with our fans, Hollywood is very hot for Angry Birds as a brand… We’re working on some very interesting projects!”

Might Rovio be interested in launching an Angry Birds channel on YouTube, given that company’s rollout of Original Channels? “It’s up to us over the next few weeks as we launch our series to figure out the best way to bring the content to market through digital channels,” Stalbow said, noting that Rovio already has a deal with Samsung to make content available through its connected TVs.

“Right now, we’re trying to make some very important decisions and some strategic bets on partners we can really grow with over the next five years,” he said.

Is Rovio concerned about the woes being suffered by social games companies like Zynga – is that why it’s diversifying beyond games? “I think it’s important to have multiple points of distribution for your content. We like the fact that we’re on mobile devices and tablets and smart TVs and Roku boxes… and Facebook, and web,” he said.

“We’re not dependent on any one platform. It’s about trying to be wherever the audience is… And it’s important to have multiple revenue streams, whether that comes from selling games or selling advertising, or selling products, or our video business.”