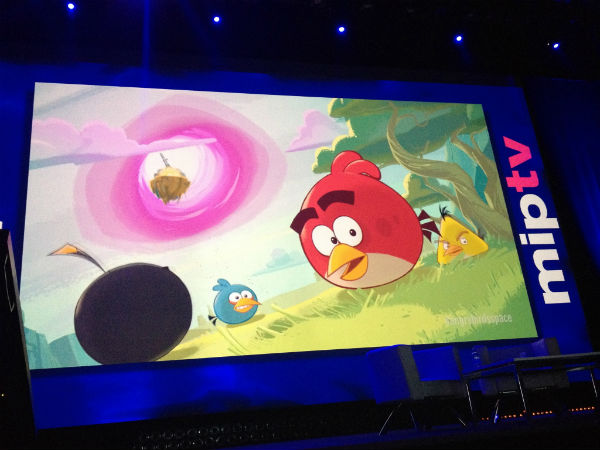 More than 700 million people have downloaded the Angry Birds games, with the latest one – Angry Birds Space – notching up 20 million in its first week this month. Developer Rovio has sold more than 25 million plush toys and licensed more than 20,000 branded products.

Oh, and the company owns an animation studio too. Nick Dorra, Rovio’s head of animation, gave the Media Mastermind keynote speech this afternoon at MIPTV.

“Everything has gone in a huge, huge bigger direction than we ever thought it would be going in,” he admitted. “I’m so humble when somebody walks up to me and shows me their screen of three-star levels. To think our game means so much to them, it just makes us work harder and harder every time.”

Rovio worked with NASA as a partner on the Angry Birds Space launch – the game was announced from the International Space Station (“the first ever game launched from Space!”) as well as National Geographic, which is making a companion book.

“People still think sometimes that Angry Birds is an overnight success. It is not. It is the 52nd game that Rovio has done since 2003,” he said. “The plan was of course that as soon as we had something that has wings, we’d put everything behind that… and we would then build that one game into a real brand and expand on the characters.”

Rovio has built everything in-house, with an animation department, a licensing department and books/comics publishing teams.

A key appeal for the games are the quirks of the characters, but “there is very little room in our app game where you can expand on story” admitted Dorra. Which is why Rovio wants to bring in the back story for the characters, sing animation.

“It’s about telling more engaging stories… and deeper thoughts, deeper feelings of the characters, such as why are they always angry?” Dorra said that the first animation released by Rovio on YouTube has now been watched millions of times.

“Angry Birds is not just about the gameplay, and will be in the future less and less about the slingshot, actually, and more and more about the characters.”

“We’re going to roll out a weekly animation series later this year of shortform content,” said Dorra, who said animation is “a great way to connect with our existing fans, to give them more and keep them engaged, but also for acquiring new fans. Not everyone might want to play the game.”

Rovio sees a very strong shift from traditional media consumption patterns into mobile entertainment consumption, said Dorra. “In the US, people watch 150-160 hours of television every month, but the top apps are already bringing 20 hours per month. That’s huge, and it’s just the beginning.”

Dorra then sat down with moderator Nic Newman for a chat about Rovio’s strategy and future direction.

The series will be 52 episodes of 2.5-3 minute episodes, rolled out in the Autumn of this year. “We’re going to roll it out on all possible devices. We’re looking at building a video app for that, and we’re also looking at partnerships and so on… We want to be on all screens.”

Will the birds talk? “We have not yet encountered a talking member of the species, but who knows? There are new birds popping up all the time…”

What can the television industry learn from Rovio’s success? Dorra suggested that its strategy of releasing games and content globally is a key way to fight piracy.

“There is a time coming, whether people like it or not, where you have something released at the same time, all over the world,” said Dorra. “It’s hard to fight it. It will not happen overnight, obviously. I don’t know whether it’s good or bad. I just feel it will be going in that way.”

Rovio is also working on a feature film, working with former head of Marvel Studios David Maisel. “It’s in development, but it won’t be out in 2013 or 2014. You’ll have to bide your time and first watch all of our shorts!”

Is there a danger of over-exploitation of Angry Birds? “There’s always the danger of course, but we try to balance that. We don’t do all the merchandise projects that are offered to us… We also have to balance that with the game…”

Are there new characters and new games coming in the future, that won’t feature Angry Birds? “We are going to release completely new IP this year. Nothing to do with Angry Birds. But we are also working on bringing new projects in the Angry Birds universe that have nothing to do with the gameplay we have seen before,” he said.

“You can’t put all your Angry Birds and their eggs in one basket, otherwise the pigs will steal them!”