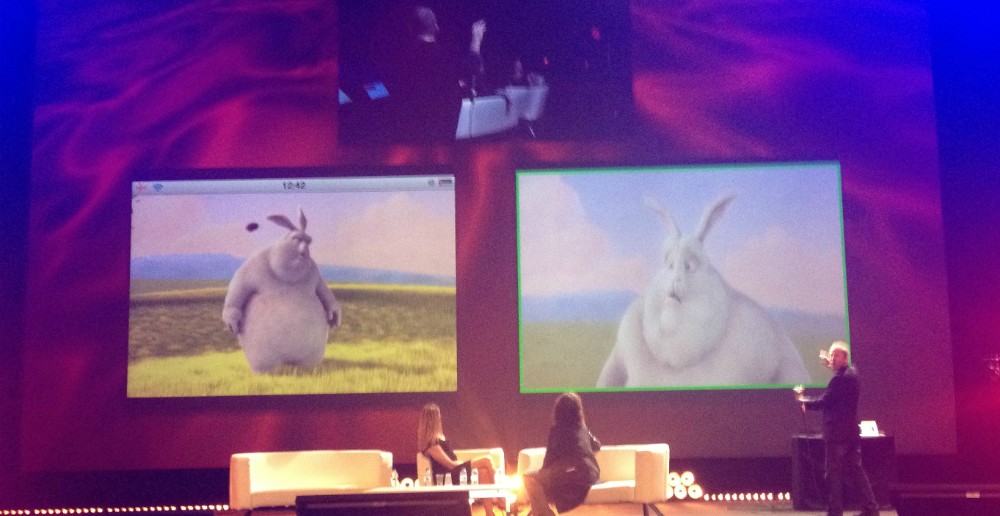 The two-day MIPCube conference threw up plenty of technology innovation and future-gazing debate – you can check out our coverage for proof of that. Today at MIPTV, there was a roundup session in the Grand Auditorium, to bring some of the best bits to a wider industry audience.

First to speak was Sandrine Dufour, EVP Innovation and Deputy CFO at Vivendi. “There’s a lot of inertia in the TV usage. TV is a deep-rooted family entertainment, it’s been there for decades. Television viewing is huge, it’s four hours a day in the US and close to that in this country [France]… and it’s growing, another plus 10-minutes in the US last year.”

She noted that on-demand and multi-screen are the two key evolutions in recent years. Catch-up TV is now used by one in three people in France, growing 30% over the last year. For multi-screen usage on tablets, smartphones and laptops: “This is what brings a much more convenient interactive experience of interacting with the TV on another screen… This is how we see the evolution of a more convenient interface with the TV.”

“The quality and the premium content will remain absolutely king,” continued Dufour, talking about the programming side. “The profusion of content means there is even more need for recommendations.” Both algorithm-based, and recommendations from friends via social networks and social apps.

What’s next? Canal+ has been testing transmedia formats, running games in between series of popular shows to build audience engagement, and exploring the potential of working with Twitter on social TV features.

Over to Geoff Sutton general manager of MSN Global Media Group, who provided MSN’s view on the TV business. “There’s a lot of talk about content is king, and I think that’s true,” he said, while noting that who is in control of that content is changing rapidly.

Sutton talked about the five “modes of content consumption”, from research – using one device for deep research and transactions, through Transfer – start a task on one device then continue on another – and Connected, using multiple devices in primary and secondary roles. Then Commute – using a device to access content when travelling – and Down Time – using a device to relax, kill time and be entertained.

“One of the most interesting things that’s happening is the computer is coming into the lounge,” said Sutton. “Now, your TV is becoming a PC.”

Moderator Robert Tercek asked Vivendi’s Dufour how she manages the process of innovation at such a big and diverse company. She said that the trends she outlined earlier are affecting all its businesses, from TV to games to music.

“Innovation is a daily commitment for each of their businesses. They need to test out what works and what doesn’t work,” she said. “Also what’s key in a company like Vivendi is open innovation. We absolutely need to be in touch with the outside world experts, and get closer to the innovative ecosystems, like the startups.”

Tercek noted that both Microsoft and Vivendi have embraced the developer/hacking community – Microsoft with Kinect too.

Dufour also talked about how it sees mobile business models emerging for its content, suggesting that mobile can act as an extension of its content and IP. “We see this new form of in-app, where it’s a free game experience, and at some point in time you want to buy this weapon or item… It has tripled over the last 12 months, it’s an amazing new form of monetisation in the mobile space.”

Onto the next section of the MIPCube session, which showed off some of the winners of this year’s MIPCube awards. First: Jilion’s SublimeVideo, a service that aims to solve a big problem around online video, as it moves from the Flash technology to the HTML5 standard.

The problem: HTML5 is implemented differently across different devices and browsers. “In this context it is key to have an HTML5 video solution that works anywhere, all the time,” explained co-founder Mehdi Jacques Aminian. That solution being SublimeVideo. In other words, it’s a way for companies to make sure their online videos play properly across as many devices and browsers as possible.

SublimeVideo launched commercially in 2011, and there are thousands of sites using it, including Fox, NBC, Gucci and Sony. It won both MIPCube Lab awards – the main award and the separate Coup de Couer prize from Vivendi.

Next came the prize-winner in the Content 360 video category: The Connected Set with Crash Test Dummies. Tom Jenkins took to the stage to talk about it.

“I’m sure all of you have seen a clip online that makes you go ‘wow!’,” he said, before explaining that Crash Test Dummies aims to provide a behind-the-scenes guide to stunts. “Crash Test Dummies is all about the science behind stunts, with a liberal sprinkling of comedy, spectacle and entertainment.”

Next up was the Content 360 New Transmedia Concepts in Fiction prize-winner. The winner: Telfrance series with Anarchy. Benjamin Faivre explained that it’s set in a future world where the government has limited its citizens to 35 Euros a week, with anarchy ensuing.

“It’s a competition, a game,” he said. People will follow an eight-week fake news site online and on the second screen, with the audience able to create some characters, while also watching an eight-episode drama series.

Finally, there was the winner of the MIPCube TV Hack Day: Aral Balkan’s Grab Magic, which used Kinect and a smartphone to enable viewers to physically reach out and “grab” screenshots from the main TV screen, and save them on their phone.

As he had explained in the MIPCube presentation linked above, Grab Magic started as a reaction to the frustrations of ever-more-complex TV remote controls. “Experiences matter. When they’re great, they can go beyond function,” he said.

“Great design is design that amuses and delights you. Sometimes, when you have something that’s so simple, it becomes magical… Sometimes the best UI is no UI… Great design makes the technology invisible.”

He added: “This is nothing to be feared. This is something to be embraced.” He suggested that broadcasters could launch this app to help people share the moments that they love when watching TV, rather than being outside the loop when people take photos of a TV and share them on Twitter or Facebook.

“This could go to your website and people could view it there. Don’t fear new technologies.”

Check out all the winners of MIPCube’s competitions here 🙂