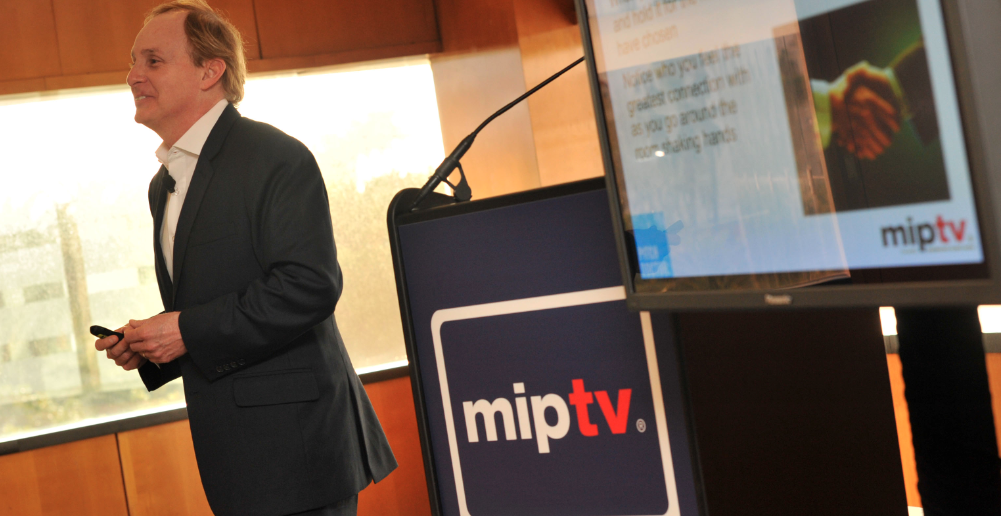 Liveblog: The Pitch Doctor’s guide to making it at MIP

Paul Boross gives the ins and outs of hitting your perfect pitch at MIPTV
By Stuart Dredge on April 4, 2011 1 Comment

The next few days at MIPTV are going to be a blur of pitches for many attendees, as they look for deals amid the hubbub of the show. Paul Boross thinks he can help.

Styling himself as The Pitch Doctor, he and his team coach the art and science of pitching to a range of organisations, based on his background in psychology and performance. This morning, he held a breakfast session in the Palais to provide some tips for MIP attendees, based on his experience of 34 MIPTV and MIPCOMs.

Boross’ training is based on neuro-linguistic programming (NLP) – “I like to think of it as the study of excellence,” he said. “Everything was modelled off real people who did things really well. It’s not just a theory, it’s the real thing… You can learn how to be more charismatic and how to connect better with people.”

He kicked off by talking about communication being the centre-piece of everything that happens at MIP, and the importance of understanding that everyone is at heart a salesperson. “The first thing you are selling is yourself,” he said.

The first place to start is understanding why you’re here – to make new contacts? That’s useful but it’s a long-term plan. To sell your format, idea or service? That’s good, but is it under your control, and how will you judge your success? The next step: understanding why ‘they’ are here – the people you’re pitching to. Are they on a jolly, or are they here to buy your format, idea or service? And are they here to network?

“Yes. Everybody is here to network,” said Boross, before stressing that MIP attendees should think of others as essentially here to “find out if they can work with you”. He explained a linguistic trick for pitching: open your pitch by asking ‘What one thing could we do in this next half hour that would make coming to MIP worthwhile for you?‘

“You have to understand this basic premise: your format,  idea or service is secondary to what you’re doing. If there’s an element of risk, people make a buying decision second,” he said. “They make a relationship decision first… That’s the way we are as human beings: people buy people… 85% of all the success you will have in your life is down to the quality of your relationships.”

Boross pointed out that more often than not, relationships established at MIP will pay off at some point down the line, rather than immediately.

He moved on to the importance of having a clear goal (or goals) for MIP, but they have to be framed in the positive, and have a clear timeline attached to them. ‘I want to make more friends’ is “vacuous”, but ‘I want to get to meet more people and by the end of today I will know another 10 people’ is more suitable. What’s known in psychology as “well-formed outcomes”.

How to meet those people though? Boross drew a distinction between ‘networkers’ and ‘NOTworkers’ – the former “do everything right, and they say that networking works”, whereas the latter “make a number of simple mistakes, and say that networking is a waste of time”. A self-fulfilling prophecy in both cases.

Some tips on what networkers do: they use networking events to make contacts, and they go “armed with curiosity to find out as much as possible about the people they meet as quickly as possible – curiosity is the big buy word there”.

Networking is not a chance to tell people about yourself, according to Boross, who added that good networkers collect lots of business cards, prepare carefully, and follow up on every contact made.

“Expert networkers really genuinely value their contact network,” said Boross. “They also don’t focus on finding targets. They are looking at finding routes into people. That’s a subtle difference… One person you meet may be the person who takes you somewhere else.”

Boross also talked about the importance of first impressions – made between two and three seconds after meeting. “By the time you’ve shaken their hand, that’s when the decisions have been made,” said Boross.

Boross also warned that introducing yourself to new people is not a problem, but what’s more important is separating yourself from the person you’re talking to, and meeting more new people, rather than getting huddled in a group of people you already know – a common phenomenon at MIP, he said.

Another practical tip on establishing a rapport: “Smiling sets you apart… If you smile at somebody else, they have to smile back.” And smiling creates serotonin in your brain, so by smiling at someone, not only do you feel good, but if they smile back, they’ll feel good too. A good start to a pitch meeting.

Also, a tip on looking people in the eyes: don’t. Look them in one eye. “Looking at them in both eyes looks vaguely psychotic!” laughed Boross. He also said an expert tip is to, when you meet people, take note of their eye colour. “It forces you to look at them properly, and psychologically, the message they get is ‘this person cares, this person is connecting, this person I will listen to for a little bit longer’.”

There was advice, too, for meeting people even when they’re huddled in little groups – cliques – at MIP parties and networking events. Boross told the tale of one senior executive who simply strolled in to these huddles saying “Hello chaps!” – it was all about his attitude and enthusiasm. “Truthfully, what people buy is enthusiasm,” said Boross.

“70.9% of people will change supplier based on one thing – if the new supplier is more fun,” he added. “People lead very, very dull lives generally! What they’re looking for is fun… If you are associated with fun, they’ll keep wanting to come back and see you, and that means they’ll be wanting to buy more stuff.”

In summary: you may think the format or show you’re pitching is fantastic. But actually, you are the main factor, not the specific content of your pitch.