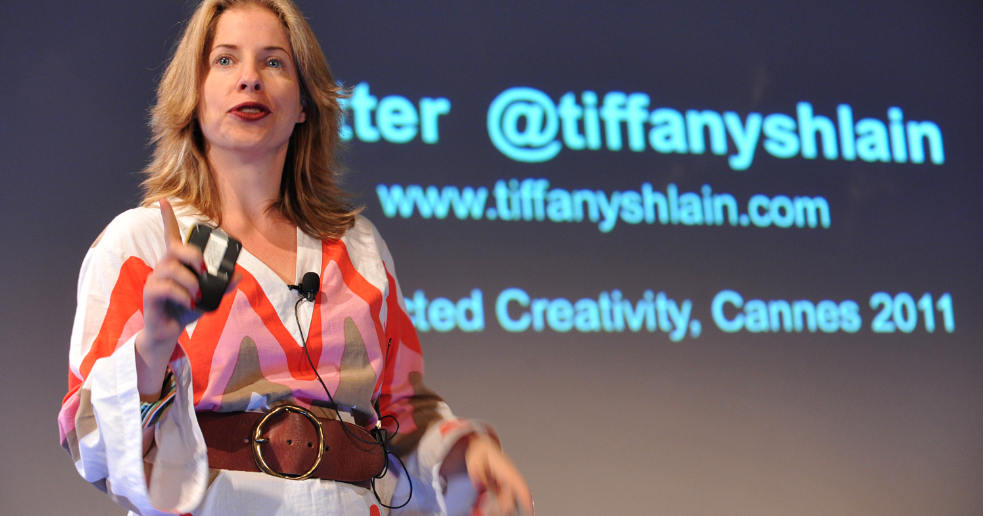 ...followed by a screening of Connected: An 'autoblogography' about Love, Death & Technology
By Angela Natividad on April 6, 2011 1 Comment

“I’m just going to say the word ‘engagement’.” That’s at the heart of everything we’re doing: engaging people in emotions, stories and conversations. “I’m starting to think that I’m not really a film maker, I’m a conversation maker,” she added, bringing herself, and her own work, into our bubble.

She admitted that as a mother and wife, engagement is important but the degree of our connectivity also bothers her. Often you’re not present enough to the people most important to you – the ones physically the most near.

Sometimes you just need to unplug. At this point she showed us “Yelp”, her manifesto on unplugging and a tribute to Allen Ginsberg’s “Howl.”

Shlain’s family does a day of unplugging once a week. “It was hard at first …” but then it’s great. “Our minds do need downtime.” They are on their 5th week.

Having set the foundation for our compulsive connectedness, she moved on to film.

“Hitchcock said a film is made 3 times: when you write it, produce it and edit it. But I think today there is a 4th time: when you distribute it,” she began.

Today, as content creators, we need to be thinking, “this film is step one. And all the different ways that you’re going to get the film out, is how the film is going to live in the world.”

Here she shows us “Tribe,” another film of hers that, in a way, seeks to get us thinking about our identities in the context of connectedness by simplifying humanity into that fabled 100 people.

The blocks composing the DNA of her film are starting to come together. She arbitrarily asks how many of us use Twitter, and how we feel about it, then tells her favorite story about Einstein.

He was being interviewed, and a reporter asked for his phone number, a request he gladly obliged. He reached for the phone book.

The reporter, surprised, exclaimed, “You’re the smartest man in the world. Why don’t you know your own phone number?”

“Why fill my mind with such useless information if I already know where to find it?” Einstein asked.

Think of that in contrast to how schools prioritise memorisation and not necessarily the quest for it.

“Was Einstein able to think about the theory of relativity because he didn’t worry about holding on” to little things like that? Shlain wonders aloud.

The biggest concern about Guternberg’s printing page was that people worried we’d lose our memories: books are horrible, people won’t remember anything anymore!

Think of Twitter in that context: many think it’s a waste of time or even mentally destructive, but the phrases and anecdotes that you remember from great thinkers are mostly under 140 characters, aren’t they…?

“We’re evolving our brains, extending them in great new ways,” Shlain corrected. This new openness, and the demand for real-time information, has led to changed expectations in reporting, government and business transparency and the free release and manipulation of huge data sets that people previously didn’t take any interest in.

“The interesting thing about having so much data is that you can see so many patterns that you could never see before,” Shlain marveled, and those patterns include problems with the world: big-context problems like the source of bad milk being sold in Africa.

All this forms the basis for her half-autobiographical film, “Connected: An autoblogography about Love, Death & Technology”, which is also the story of our connectedness.

Connectedness wasn’t just the topic of the film, it’s also an intimate part of its development. The film team hit up Facebook or Twitter with problems, big or small, that plagued them, even asking for song suggestions when they lost the rights to songs they wanted to use.

The world was with her from the start of this project — at least it seems thus to her.

Its style also harks back to a habit she’s never kicked, a precursor to the mashups we see all the time today: “I use a lot of archival footage.” As a student at UC Berkeley, she was constantly recutting old movies because there was no film production studies department at the time to teach her otherwise.

Post-production is also a tribute to our connectedness. The new “Connected” DVD, available on the website, is recyclable. You can also find “Connected” screenings via mobile in the US, and a Twitter feed for subjects covered in the film on the site, and even a 3D webspace to see how research was connected.

“The goal of the film is to get people thinking in a connected way because I think that will lead to a better world,” she concluded.

And with that, the screening begins. It starts with this quote:

“When you dig at a single thing in the universe,
you find it’s attached to everything else.” — John Muir.