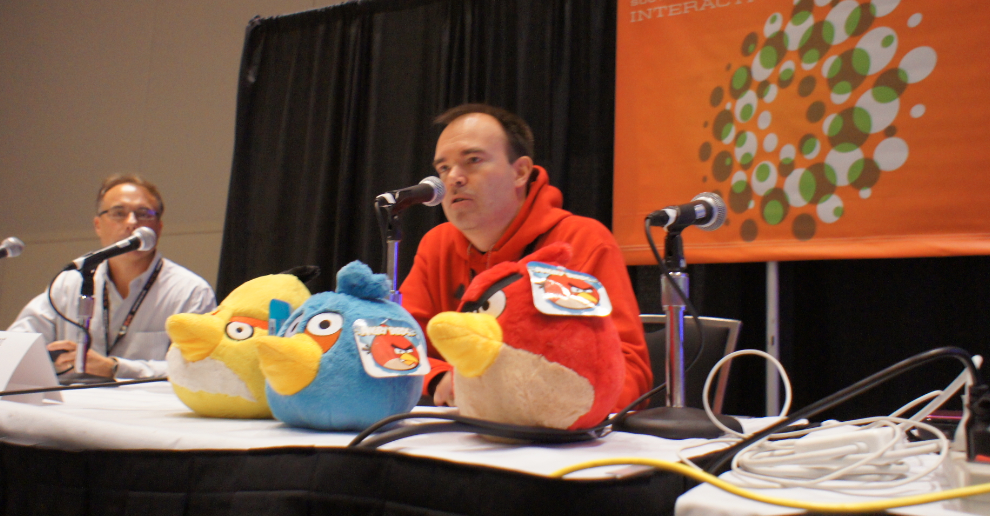 Transmedia, Foursquare & Angry Birds (photo) were very much the buzzwords at the Austin tech gathering: MIPBlog reports
By James Martin on March 15, 2011 0 Comments

SXSWi, the interactive arm of Austin, Texas’ music & film tradeshow and festival, attracts an estimated 14,000 delegates to network and learn about the latest trends at a series of high-level, crowdsourced conferences. The interest in SXSWi is such that its interactive attendance outgrew its music attendance for the first time last year (cf. this incredible infographic tracking SXSW’s 25 years). Sign of the times?

Cutting-edge knowledge was delivered from the get-go, notably at a series of sessions on convergence. Dan Shust, executive director of web/social/mobile outfit RI:Lab Resource Interactive, began by running through some predictions he made about convergence at SXSWi 2010. Most had come true or even surpassed his expectations. For example, social is now omnipresent, whereas last year it was merely ‘the thread.’ “We only have Facebook’s ‘like’ button since April,” said Shust; and it’s had quite an impact since then. Notably with innovative uses such as a Levi’s campaign where youngsters could hold up RFID wristbands to automatically ‘like’ something.

Location is also now pervasive, observed Shust, whilst warning of “check-in fatigue” with the likes of Foursquare (see below); for him, passive checkins are the future. Services like Shopkick, for example, already allow shoppers to receive rewards simply for walking into a store.

Other now-inevitable trends, said Shust, was how he now expects to “get my Netflix everywhere, be it at home, via PC, mobile or tablet; the atomisation of commerce, notably via shopping directly on Facebook; the notion that “life is a game,” seen for example in ski resort Vail’s RFID-enabled ski pass EpicMix, which allows skiers to show everyone else how far they’ve skied and where; recognition technology, for example QR codes, now everywhere, or iPhone app Into_Now, which listens to the audio of the TV show you’re watching and allows you to discuss that show with your friends via social media; augmented reality such as the AR Lego boxes by Junaio (who we also mention here) and of course Kinect, now the fastest-selling gadget ever.

Finally and tellingly, Shust underlined the importance of the tablet revolution. Noone at SXSWi last year had iPads; this year, over two thirds of those present had one; and a quarter of those were iPad 2s. Needless to say, the tablet is now the “major convergence device,” as Shust put it.

Begging the question: “Have we converged?” Maybe the term “convergence” is no longer one we need to use, said Shust…

Transmedia was also well represented, notably with Anthea Foyer of transmedia lab and agency thelabs, sharing her tips for building successful transmedia projects (namely those which use two or more different media to tell a story):

1. Provide the audience with new ways of participating with content — for example via iPad or Kinect — as long as they relate to your story & help tell it. Foyer’s example of Time Tremors, where kids can ‘take’ bees off the TV with smartphones and transfer them to a PC, was a good one here

3. Drive content and audience through a number of interconnected platforms & channels, for example in Cisco Systems’ adventure for their employees, “The Hunt”

4. Create a momentum of audience participation that is both sustainable and far-reaching: fan initiatives such as the Mad Men tweets should be embraced, not feared: “let people be a part of the storyworld you’ve created,” said Foyer.

5. Create meaningful content and rich story worlds : “the most important thing for me,” said Foyer.

Then, on to the stars: Foursquare‘s Dennis Crowley‘s headline session was literally seething with delegates. When asked whether he would consider his company being acquired by Google (his former employee), Crowley replied that he’d rather consider partnerships, notably because “we do this the way noone else can.”

“We’re good at checkins; it doesn’t feel right on other services,” said Foursquare’s CEO, in a thinly-veiled swipe at Facebook Places… He also reminded the crowd that his company now has a network of 250,000 merchant venues, who can give special offers to people who check in to theirs stores. “There’s a chance for us to say ‘these are people that’d love to go to your store’ ,” said Crowley, suggesting that could be as valuable as Google’s domination of search advertising. What if he was right?

Then a mobile session saw one man steal the show: Peter Vesterbacka (photo), the creator of mobile gaming phenomenon, Rovio’s Angry Birds. As we reported in December, the game currently makes $1 million per month on Android alone. As such, said Vesterbacka, in gaming, “the centre of gravity has now moved to mobile on a massive scale.” He notably explained how the phenomenon grew, not overnight, but country by country. First in Rovio’s native Finland, then in Sweden… and now worldwide, including India, where “we’re number one, yet we haven’t even been there,” said Vesterbacka.

The secret of Angry Birds’ success was not the huge sort of marketing campaign many games benefit from, he explained:

“Big companies usually spend millions on marketing : we spent zero on advertising. It’s all about word of mouth, namely social media. Which isn’t to say it’s free: social media is the most resource-intensive type of marketing you can do, you have to have a lot of people. At Rovio, we answer every tweet, every criticism. Marketing is all about dialogue.”

Remember what we said about changing times…?

Check back here soon for more SXSW coverage and videos…