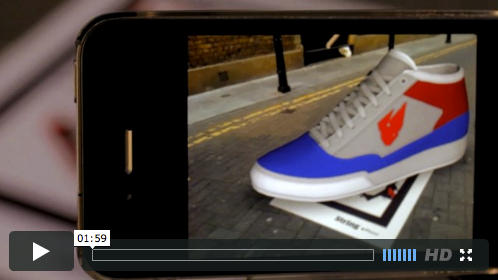 Remember last year, when everyone was gushing about augmented reality? What happened? Some new players are reviving the sector, says Jumpwire Media's president
By Gavin McGarry on March 8, 2011 1 Comment

Smartphone applications such as Yelp! and Layar were considered to be the pioneers of the augmented reality genre. I used Yelp’s augmented reality restaurant locator all the time but I found, in the end, that it just took too much time to load the information in Manhattan (thank you AT&T) and I rarely use it now.  As for Layar, I love the concept, but there has never been anything I truly found useful on their system… yet. Today, however, new developers are taking AR to the next level with concepts and products that will change our lives. Check out the videos for three great ideas below:

String
The future of Augmented Reality for all manner of purposes, be it marketing, games, or education, String takes anything ranging from movie posters to magazine advertisements and converts them into interactive 3D images. String offers a SDK (software developer kit) which allows users to create AR apps in as little as 10 minutes, claim its makers. Its implications inparticular for the iPad 2 are huge, considering Apple’s latest gadget has a rear facing camera and is thinner and therefore more portable.

Junaio, by Metaio
Junaio.com has brought augmented reality to the everyday utilities of the average consumer. Junaio’s concept is just the beginning of what AR apps may become. Helping consumers understand the world around them by adding a mobile layer is the key to the future growth of AR in my opinion (video courtesy of The Next Web).

Cereal box AR Game by Dassault Systèmes
This idea is genius. Build 3D glasses by cutting them out from a cereal box then play a game on your computer using the glasses. Nestle was involved in the concept. The idea is not necessarily augmented reality proper, more alternate reality gaming, but it is still genius.  One of our team tried it on a netbook and found it slow but on a normal computer it works very well I’m told.  Here is a video showing how it works:

Jumpwire Media is assisting with input and advice for Connected Creativity, the new content-meets-gadgets event taking place alongside MIPTV from April 4-7, 2011 in Cannes, France.