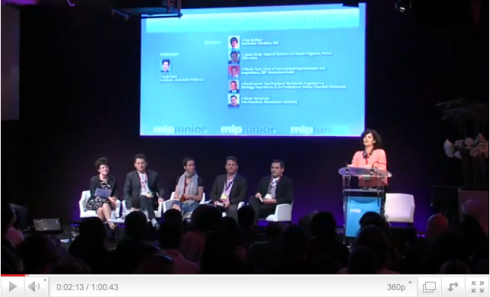 Julien Borde, head of children and youth programmes at France Televisions, is obsessed with hybrid formats. Speaking at the MIPJunior Buyers’ Summit on Saturday, he said that mixing live action and animation, or animation and documentary, works for older viewers. “Kids switch to live action as they get older,” he explained. “Hybrid formats can help us keep them.”

“We’re looking for strong live action,” said Nicole Keeb, head of international co-productions and acquisitions, Channel ZDF. “Our focus used to be animation, but with the success of H2O, Dance Academy and Elephant Princess, we’re increasingly looking for live action.”

Oliver Schablitzki, vice-president, Nickelodeon Germany, wanted live action too. “I’m looking for groundbreaking live-action shows that are truly innovative. They could be soaps or telenovelas. And I wouldn’t rule out drama.”

Disney is rebranding Playhouse Disney as Disney Junior, and extending the channel’s target age group to include seven-year-olds. “Disney Junior will be ‘pre-school plus’,” said Levine. “Interactivity and education will be part of the storytelling.”

“CBeebies is looking for stand-out projects with great content, great ideas, and real passion,” said Kay Benbow, controller, CBeebies. “We’re looking for live-action pre-school shows. And you see a lot of children in our shows because we want children to see themselves on screen.”