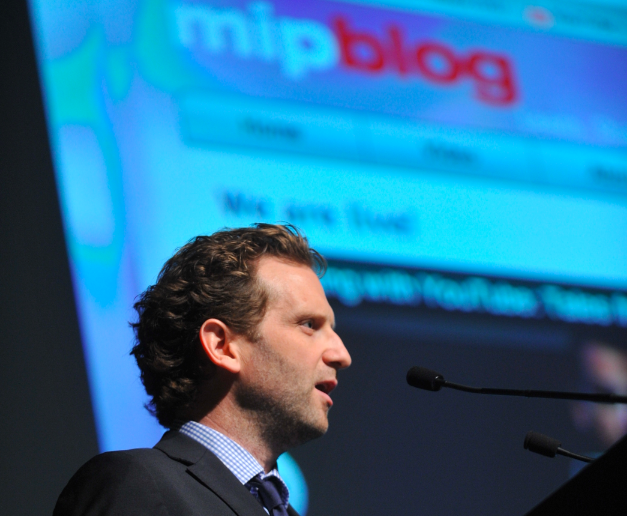 Gavin McGarry distills market trends and what to watch for.
By Angela Natividad on October 7, 2010 1 Comment

True to form, Gavin McGarry presided over this year’s MIPCOM crossmedia wrap-up, an hour and a half presentation of data points, new apps to try and trends to follow.

This is a brief synopsis of what he touched upon at outset, but it’s highly recommended that you watch the video (above) because every minute is packed with crucial material on market push points. You can also check out McGarry’s equally rich slides here:

The session theme was conveniently also the motto of Jumpwire, the company of which he is president: Sharing is caring. In general, the company divides content into 5 major buckets, useful to note:

McGarry cited a handful of sectors that he watches in order to get a sense of what’s coming. They follow thus:

Kids. “What’s happening with kids will eventually come 2-3 years to the adult market. It happens all the time.”

The music industry. “They got it so wrong. But if they manage to come out… we’ll follow them!”

“I’ve always known web video was going to be big” because the adult industry had already tested and monetised it, he said. “It’s our business, TV or film… you have to understand web video.”

In terms of strategy, clients are counseled to keep their eyes on data, video and mobile this year.

Connected TV: Everyone knows the internet and television will eventually be united, but connected TVs are available today. Of a friend who recently bought a Samsung connected TV, McGarry “literally grabbed her internet connection, jammed that into the TV and was twittering in minutes.” He called it an amazing experience.

Apps will change things significantly, he said, pointing to how packed all the apps sessions were at MIPCOM this year.

One of the biggest lessons apps have taught us thus far is one that could’ve saved us during the first web bubble: “It is not all about ad-supported. I’m sorry.” 80% of apps downloaded on iPad are paid-for, not free. Go hybrid.

Products that illustrate the power and potential of iPad apps in the business follow below.

“It quite frankly is the best app,” McGarry gushed. “You’re flipping through it like a magazine, all your photos come up […] it’s a genius idea!”

He challenged us to think about Flipboard – which garnered $12 million in promised development cash from outside developers mere weeks after its launch. What’s the next level? If we brought it into our content world, what could we do? “Because they’ve obviously just taken magazines and migrated that,” he said.

Disney reps wouldn’t confirm how much they spent on it, but Mobile Roadie CEO Michael Schneider estimated it would probably be a $750,000 app.

This basically just repeats everything you say, leveraging an oft-overlooked feature of iPad. “I totally forgot that iPad had [a built-in microphone],” McGarry mused.

Possibly the most promising for the television and film industry, though, was ABC’s My Generation App:

“The show has actually been pulled … but they used the microphone to sync up using audio so when you’re watching My Generation, which is an ABC show, things appear on your iPad like you’re in the same room.”

My Generation was caneled after two episodes, but he thinks they’ll use this tech again. (Note: the BBC has a quiz game for iPhone that listens to where you are in EastEnders and asks you predictive questions about what might happen as the plot progresses. It was demonstrated at MIPTV in April.)

What to Watch Out For

Marcel Fenez PwC says TV advertising will retain its share of spend in 2014. And strong growth for TV subscriptions is continuing worldwide. Particularly in Asia Pacific.

But McGarry insists we need more clarity around the notion of cable subscriptions.

Finally, watch out for lack of clarity surrounding video views counts in online video. (At MSN’s keynote the other day, in which a new video player was debuted, McGarry famously asked the executives how they count a video view. They didn’t know.)

Back at Joost, people would watch lots of videos for 10 or so seconds, and what they were doing was looking for something to watch, McGarry said.

But depending on where you watch your web video, what counts as a “view” is gauged differently: Dailymotion.com waits until you get to the very end to count a video as “viewed,” while YouTube counts every time a person presses play.

In 2008, Avril Lavigne fans used a constantly-refreshing website to bump the singer to YouTube’s top-ranked video site. It hit 88.9 million views when Wired caught the story in April of that year.

“This is a significant problem now. Because if they” – referring to Lavigne fans – “can do it, anyone can do it.” McGarry encouraged the industry to start asking web video hosts that crucial question: how do you gauge a view, how do you know views aren’t fraudulent?